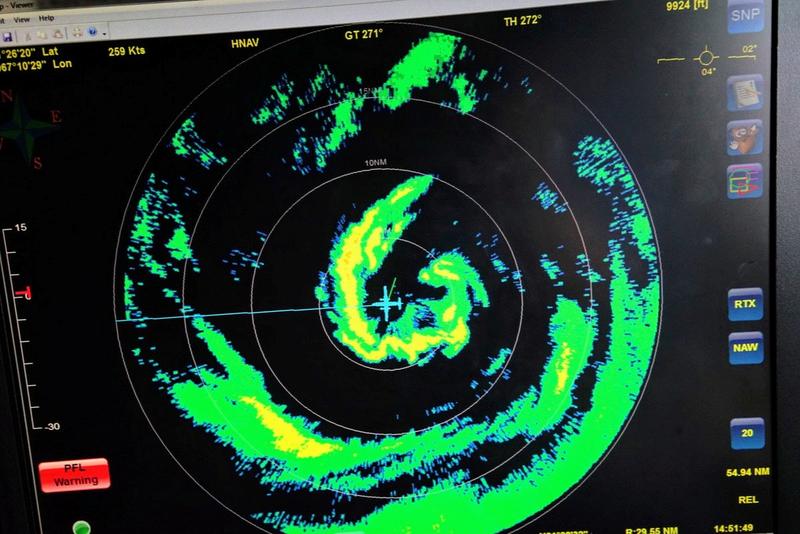 (Reuters) – After a frantic week in preparation for Hurricane Dorian, residents of Fort Pierce, Florida breathed a bit easier on Saturday when forecasters said the state’s central Atlantic Coast may dodge a direct hit from the monster storm.

Radar from the National Oceanic and Atmospheric Administration NOAA-42 WP-3D Orion aircraft shows the eye of Hurricane Dorian during a reconnaissance mission over the Atlantic Ocean, August 30, 2019 in this handout image obtained from social media. LCDR Robert Mitchell/NOAA/Handout via REUTERS

The city, about 60 miles (96 km) north of West Palm Beach, has retained a small-town charm from its roots as a pioneer settlement in the 1800s. Locals shudder to remember the devastation of recent hurricanes that ripped the roofs of residences and flooded the downtown district.

With meteorologists warning that a similar scenario was likely with Dorian, Fort Pierce residents spent recent days boarding up buildings and depleting stores of generators, food and water. But Saturday’s forecast predicting that Dorian might veer north and offshore came as a welcome surprise.

“It’s a huge sense of relief,” said David BuShea, a managing partner at Sailfish Brewing Company in downtown Fort Pierce. BuShea, who called his clientele “extremely loyal and extremely local,” said the brewery decided not to use filtered water to brew beer on Friday and instead welcomed the community to come and fill up jugs in preparation for the storm.

“You can’t ever discount the preparations,” he said. “At this point you’re not going to go take your shutters down.”

By Saturday, Dorian was churning through the Atlantic as a menacing Category 4 storm with sustained winds of 150 miles per hour.

But after repeated warnings that the hurricane could slam the central Atlantic Coast of Florida, possibly on early on Tuesday, the National Hurricane Center on Saturday detected a “notable change” in the storm’s trajectory, with the latest forecasts showing the eye could veer north and stay out at sea.

Even so, the hurricane’s track remained unpredictable, as Dorian is still far from the mainland United States and moving at fewer than 10 mph (16 kph). Forecasters cautioned that the storm still posed a threat to millions of people, as well as holiday attractions such as Walt Disney World, the NASA launchpads along the Space Coast, and even President Donald Trump’s Mar-a-Lago resort in Palm Beach.

Rick Modine, a 60-year-old whose family traces its roots in Fort Pierce back to the 1800s, did not want to take any chances. He spent much of last week moving his cattle to higher ground at a ranch just west of the city, making sure the cows were safe before tending to his house.

“For the past few days, we’ve been moving the cows to higher ground because they can’t go 24 hours without lying down, and they won’t put their heads under water to eat grass,” Modine said.

Fort Pierce, home to 50,000 people, a bustling marina and an idyllic Main Street, enjoyed decades without impact from major hurricanes, which gave residents a false sense of security.

Then came 2004. Hurricanes Charley, Frances and Jeanne blasted Fort Pierce within two months, causing so much infrastructure damage that large swaths of the city were covered in blue tarps for a year afterwards, said former Fort Pierce Mayor Bob Benton.

“I will never forget my son, Kori, yelling on the phone the morning after Frances passed. ‘It’s gone. It’s gone. The marina is gone,’” said Benton, who is 62, in a phone interview.

“I’ve never seen people take a storm as seriously as they have taken this one,” said Linda Nunn, 58, a Fort Pierce native. “People went nuts as soon as they heard it might be Cat 4. You don’t usually see that five or six days before the storm is supposed to hit.”

The NHC on Saturday warned that Florida residents should remain on alert, as the east coast is still in the storm path’s cone of uncertainty.

Mayor Linda Hudson of Fort Pierce urged the same caution, with the memories of power outages and blue tarps in 2004 still fresh in her mind.

“I’m still very concerned because we are going to get something, so people need to really remain diligent,” she said.