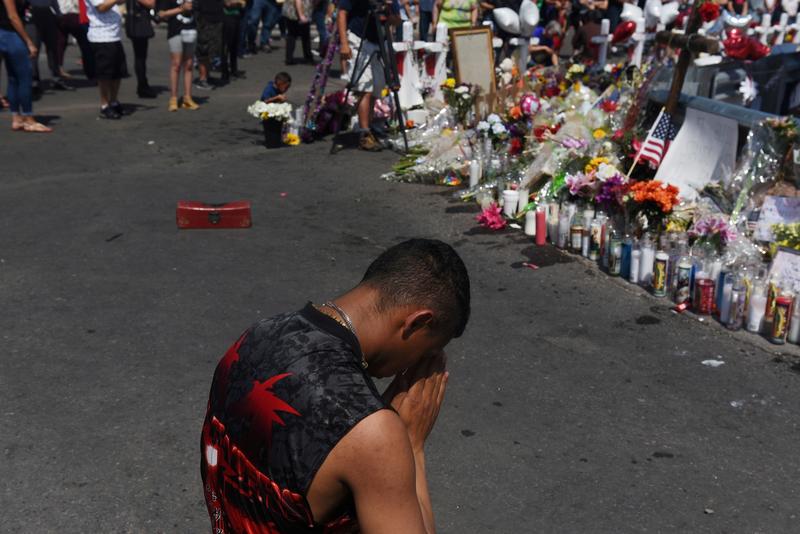 FILE PHOTO: A man prays at a memorial three days after a mass shooting at a Walmart store in El Paso, Texas, U.S. August 6, 2019. REUTERS/Callaghan O’Hare

Democrats who control the House of Representatives passed gun bills meant to tighten background checks in February, but the legislation stalled in the Republican-controlled Senate.

Cutting their summer recess short to consider the new measure after back-to-back shootings on the U.S.-Mexico border in El Paso and in Dayton, Ohio, Democrats hope to restart the gun-control debate before Congress returns on Sept 9. The panel will consider several bills that include a ban on high-capacity ammunition magazines and red flag legislation that would encourage states to confiscate firearms from people deemed a danger to themselves and others.

But only one bill, named the Disarm Hate Act, would seek to use hate crime laws to curb gun violence. Mirroring laws already on the books in three U.S. states, the measure would prohibit people convicted of certain violent hate crime misdemeanors from possessing a gun.

If approved by the committee and adopted by the full House, the measure could have a hard time in the Senate, where Republican aides say discussions have largely focused on background checks and red flag legislation.

The powerful National Rifle Association, which opposes most gun restrictions, said it sees no reason for Congress to change criminal law to control guns. “Under current law, our legal and criminal justice systems have the tools to keep firearms out the hands of all dangerous criminals — whatever the motivation for their crime,” NRA spokeswoman Catherine Mortensen said in a statement.

But even if it became law, the Disarm Hate Act could prove to be little more than symbolic. Experts estimate there are no more than 1,000 hate crime convictions in any given year and that just a small fraction involve misdemeanors. Plus, only about 30 of the 50 U.S. states have made hate crime misdemeanor offenses part of their criminal codes.

Still, the bill’s advocates argue that extending the prohibition on firearm possession from hate crime felonies to misdemeanors would close an important gap at a time of rising hate crime activity.

“If we start to see more people using guns targeting others because of race, religion, ethnicity, immigration status, it’s going to really change the game for hate crimes,” said Jack McDevitt, a leading expert on hate crimes at Northeastern University’s Institute on Race and Justice.

Advocates say that extending the ban to misdemeanors that involve physical force or a credible threat to personal safety, including a threat with a deadly weapon, could allow police to intervene early against individuals who could go on to carry out deadly attacks.

“We know that an early precursor to many of these mass shootings is some hate crime activity,” said Representative David Cicilline, who introduced the bill that has 136 Democratic co-sponsors.

“If you look at communities of color, religious minorities or the LGBTQ community, hate crimes against each of these groups have increased,” Cicilline told Reuters.

Several Republican members of the House Judiciary Committee were unavailable to comment on gun legislation despite repeated Reuters queries. They are expected at a meeting set for Wednesday when the new legislation will be taken up for consideration, however.

Republicans favor legislation that would create a Mass Violence Prevention Center within the Justice Department to coordinate law enforcement responses to potential violence. It would allow for more federal prosecutors to address violent crimes and would try to reduce the flow of firearms to the black market by stiffening penalties for gun thefts from licensed dealers, according to a Republican committee aide.

“If we’re going to help prevent mass tragedy, we need to keep guns off the black market. We need to help local, state and federal law enforcement better coordinate responses to potential threats of mass violence,” said the aide, who requested anonymity.