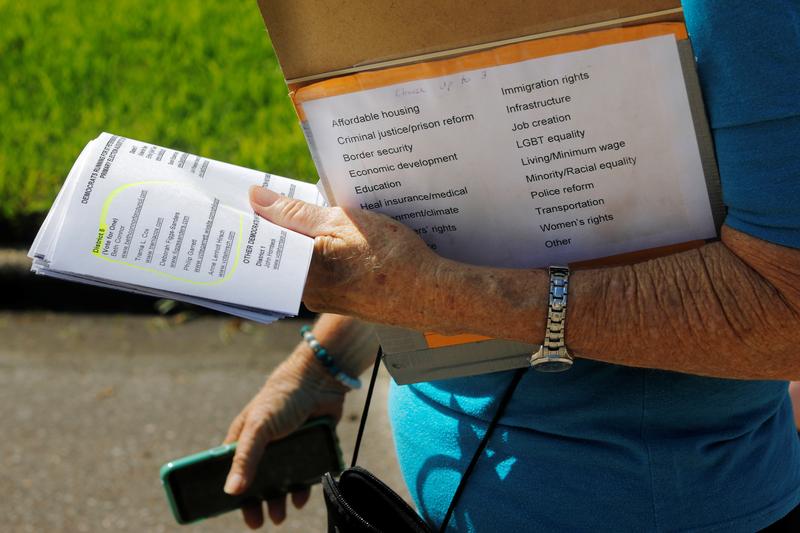 ST. PETERSBURG, Fla. (Reuters) – Ellen Kirschner is no cheerleader for Donald Trump, but the retired Florida letter carrier also feels unsure about voting for a Democrat in next year’s presidential election.

Volunteer Diana Fitser carries a clipboard with a list of some of the top election issues while canvassing voters for the Democratic Party of Pinellas County in St. Petersburg, Florida, U.S., August 24, 2019. REUTERS/Brian Snyder

Her independence makes her a rare breed in the American electorate – and a critical early target of both parties’ campaigns in battleground states that are expected to decide the November 2020 contest.

Democrats are already out knocking on doors looking for voters like Kirschner. The leading Democratic super PAC is spending up to $450,000 per week to reach her with digital ads debunking the president’s record. Republicans are ramping up a data-driven campaign to win her vote.

Voters declaring themselves as independent of a major political party rose nationally by 6 percentage points to 28 percent of the U.S. electorate between 2000 and last year’s congressional midterm contest in states with party registration, analyst Rhodes Cook wrote in Sabato’s Crystal Ball political newsletter at the University of Virginia Center for Politics.

But as few as 19 percent of Americans identifying as independent truly have no leaning to a party, according to the Pew Research Center.

“A lot of money is going to be spent on a relatively small number of persuadable voters,” said Cook. Trump’s polarizing leadership means there are fewer undecideds than usual, he said.

Kirschner lives at the epicenter of battleground state politics in Florida’s sun-soaked Pinellas County, the largest swing county in the largest of the states that pivot between parties in presidential elections.

In 2016, she and her neighbors living in largely working- and middle-class ranch style homes in Pinellas’ precinct No. 212 split their ballots evenly between Democrat Hillary Clinton and Trump, with 335 votes each.

She wants more gun control, but not an outright weapons ban. She agrees with Trump that illegal immigration is a problem, but disagrees with his administration on separating children and parents at the U.S.-Mexico border.

Kirschner voted for Trump and leans toward doing so again in 2020, but will not decide until she knows who the Democratic candidate will be.

“Environmentally, he is not good. Business-wise, he is not that bad,” said Kirschner, 61, whose New York accent remains strong almost four decades after she moved to Florida.

“Giving away this, and giving away that,” she scoffs at promises to expand social entitlements and healthcare for illegal immigrants.

Independents moved away from the major parties in the last presidential election while doubling support for third-party candidates, Reuters/Ipsos polling shows.

Trump secured the electoral votes of Florida and other close swing states with one percent of the vote or less. With the question of which of the many voter segments made the difference still up for debate, independents are seen as key.

Republicans won the independent vote by 7 percentage points in 2016. They say they can win them over again, citing internal Republican National Committee (RNC) data showing Trump’s trade policies with Canada and Mexico, for example, popular among independents in Pinellas and across Florida.

The RNC figures also show independents are not impressed with Democratic proposals for government-run healthcare for all and are opposed to giving free care to undocumented immigrants.

“It always comes down to who can convince the independent voter,” said Trump campaign spokesman Rick Gorka. “That is how you win the election.”

Democratic groups are working to chip away at Trump’s advantages. Priorities USA, a liberal super PAC, has launched an early digital ad campaign in battleground states including Florida to argue that economic growth under Trump is not benefiting all Americans.

The group’s research shows Florida’s independents favor Democrats over Republicans by 45 percent to 28 percent. One in four could be persuaded to vote for either party’s candidate, according to its analysis.

In a state with tight elections, Priorities USA Chairman Guy Cecil told reporters last month that winning even half of these voters could be “a difference maker.”

Independents are most concentrated in the Tampa Bay media market, including Pinellas, and throughout the central state east to the Orlando area, according to an analysis by Susan MacManus, a political science professor emeritus at the University of South Florida. This is the state’s so-called Interstate 4 corridor, an often decisive battleground.

Local Democrats in Pinellas are already canvassing for like-minded independents, as well as Democrats who do not vote regularly.

On a recent steamy Saturday, Anne Ferrante Ghosh and another volunteer hopped in and out of their cars for three hours along twisting residential roads to learn these voters’ top concerns.

Reuters/Ipsos polling shows independent voters nationally rank healthcare and jobs as their top issues. Democrats are closest to sharing their priorities, although they consider climate most important. Republicans are most concerned about border security and government-funded services for illegal immigrants.

Ferrante Ghosh spoke to some half dozen voters – all Democrats, in the end, with none of the independents on her list answering their doors. She left handwritten notes with a party pamphlet.

“It’s like a box of chocolates,” she said. “You don’t know what you will get when you ring the doorbell.”

He and his wife, Angie, live in a tucked-away neighborhood that calls itself Munchkinland for its low-slung homes. On their fence, a rainbow-colored sign welcomes visitors: “all cultures, all colors, all sizes, all beliefs, all people, all religions, all genders, all abilities, all ages, all sexualities.”

Both consider themselves independent, despite registering as Democrats to participate in Florida’s closed primary elections. In 2016, they voted for third-party candidates, unwilling to support either Trump or Clinton.

Drew, 48, worries about the cost of healthcare. The small business owner is careful about how many pills he takes for his rheumatoid arthritis, given that they can cost as much as $2,500 per month.

A vote for Trump is out of the question next year, the couple said. “Not in a million years,” Drew said.

But Angie, 38, said they would not blindly support the Democratic ticket. “I vote with my heart,” she said.