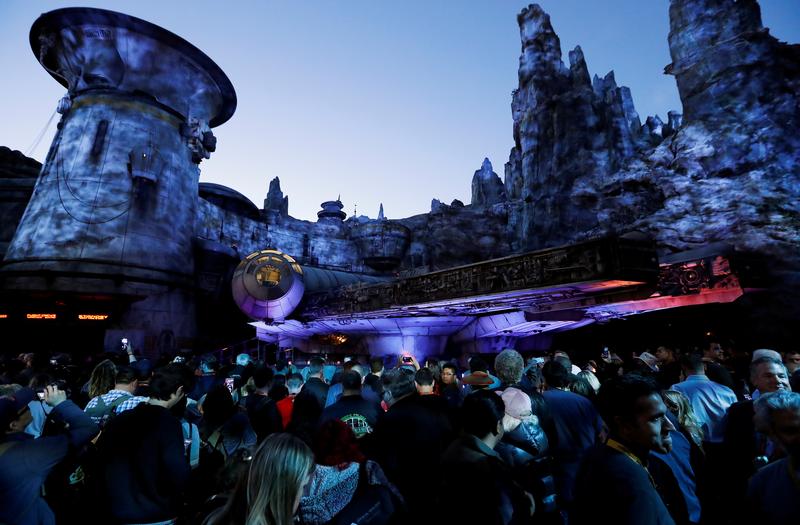 (Reuters) – Some “Star Wars” fans who have waited decades to see the Millennium Falcon, blue milk and other artifacts of the long ago, far, far away, universe up close will have to wait just a little longer, thanks to Hurricane Dorian.

The storm is bearing down on Florida just as Orlando’s Walt Disney World resort is opening its “Star Wars: Galaxy’s Edge” attraction for the Labor Day holiday weekend, prompting some travelers to cancel their trips.

“This was going to be a big deal vacation. Seeing Galaxy’s Edge for the first time was making it different from any other trip,” said Jill Benedict. The 34-year-old owner of a Lake Orion, Michigan, travel agency, who bought tickets for herself, her husband, her sister and her sister’s boyfriend the morning they went on sale, decided not to risk traveling into a potentially massive storm.

“My sister and I got in a very bad argument about it on Wednesday evening,” Benedict said by telephone on Friday. “It was pretty epic.”

Thousands of tourists have packed into the attraction since it opened on Thursday, even as Florida Governor Ron DeSantis declared a state of emergency ahead of the impending storm, warning coastal residents to stock up on water, food and medicine.

Disney officials did not respond to queries about whether the park would remain open through the storm, though it has closed for prior hurricanes, including 2017’s Hurricane Irma.

Some travelers with experience of storms opted not to risk it.

“The thought of paying $4,500 to go sit in a hotel for a week, possibly without power, was not appealing at all,” said Ashley Touart, a 31-year-old chemical process engineer from Mobile, Alabama, who had planned to visit with her husband and mother.

“We’re from the Gulf Coast. So we know that if a Cat 3 or 4 comes on shore, you’re without power and it’s absolutely miserable,” Touart said, referring to the categories on the five-step Saffir-Simpson measure of hurricane strength.

But not all fans were deterred. Stacey Fox, a 37-year-old paralegal from Fairmont West, Virginia, planned to go with her husband, parents and sister anyway. She noted that her father, who prefers not to fly, was driving a car filled with food and supplies in case the family gets stranded.

“Is it the least-dangerous thing that we could do to go? No,” Fox said. “But is it the most dangerous thing? Not by a long shot.”