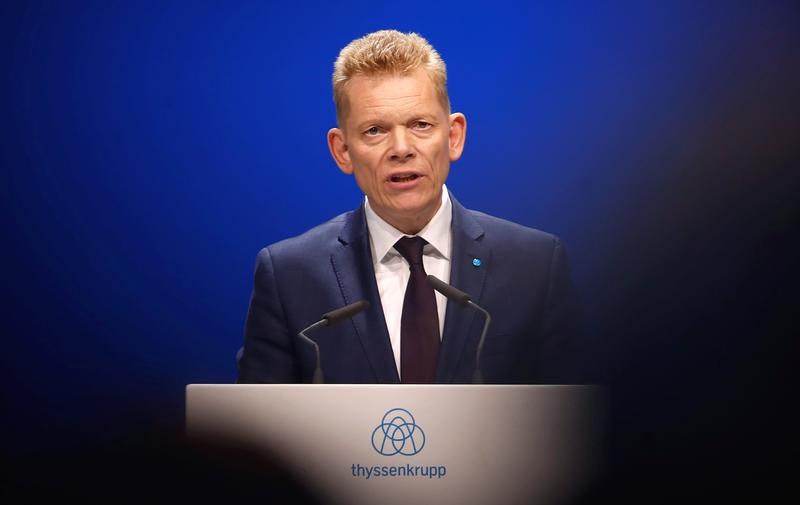 FRANKFURT/DUESSELDORF (Reuters) – Thyssenkrupp (TKAG.DE) CEO Guido Kerkhoff has little choice but to sell the group’s prized elevator division lock, stock and barrel so he can save the conglomerate’s remaining businesses, four sources close to the German company said.

Kerkhoff’s preferred option is to list a minority stake in Thyssenkrupp’s Elevator Technology (ET) but with financial pressures mounting on the company, a formal auction process that could get a deal faster has been launched, the sources said.

They said it would take at least until early 2020 to launch an IPO and a listing would only produce the best valuation in the right market environment – something that Kerkhoff cannot count on.

Kerkhoff said earlier this month that management would look at concrete offers and make a decision based on what is best for the group, its shareholders and the division.

“To rebuild the company you need cash,” said Tomas Johansson, portfolio manager at SKAGEN Funds. “Everyone knows that Thyssenkrupp needs to sell elevators. That’s seldom the best time to do a transaction but they have no choice.”

Thyssenkrupp, whose roots go back more than two centuries, has been under pressure for years from shareholders – especially its second largest, Cevian Capital – to simplify its sprawling empire which includes subsidiaries making elevators, steel, car parts, warships, chemical plants and submarines.

The conglomerate’s complex mix of disparate assets – 449 companies in 78 countries – is the result of efforts to diversify beyond steel-making through acquisitions and mergers, leaving the company hard to manage.

Efforts to slim down its portfolio suffered a setback when a proposed merger of its steel-making operations with Tata Steel’s (TISC.NS) European divisions failed in May in the face of more demands from European antitrust regulators for concessions.

When the steel merger collapsed, Kerkhoff announced the plan to list ET, the world’s fourth-biggest lift maker, and explore new ownership structures for some of its remaining units, including materials trading and plant engineering.

Initially welcomed by investors, doubts about the viability and effectiveness of Kerkhoff’s plan have intensified as he struggles to stop what he calls “the bleeding” of cash.

At the moment, the group is losing 2.7 million euros ($3 million) of cash a day and will probably be kicked out of Germany’s blue-chip index next month. Its debt is now deeper in junk territory following more downgrades this month from ratings agencies S&P and Moody’s.

Thyssenkrupp’s shares are trading near 16-year lows and its gearing stood at a staggering 204.5% at the end of June – meaning its net debt was twice as high as its total equity – all of which puts pressure on Kerkhoff to restructure quickly.

As part of the elevator sale process, which kicks off in the fall, Kerkhoff has reached out to private equity firms to discuss offers, the sources said. Potential bidders include KKR (KKR.N), CVC, Advent, Apollo (APO.N), EQT, as well as Finnish elevator rival Kone (KNEBV.HE), among others.

First-round bids for the lift division, which is valued at anywhere from 12 billion to 17 billion euros, are expected in November with final offers due in January, one of the sources said.

Thyssenkrupp declined to comment on expected valuations or a timeline for any sale process.

The advantage of an outright sale to private equity firms – some of which are forming consortia to bid – is that a deal could be faster than an IPO and less exposed to the vagaries of the stock market, two people familiar with the matter said.

But private equity firms would probably demand outright control of the asset, forcing Kerkhoff to draw up a new business model for Thyssenkrupp without its elevator business.

One person also said the market’s lack of confidence in Thyssenkrupp’s management would make it unlikely that the company would be allowed to retain a significant stake.

A takeover by Kone, for example, would combine the world’s third- and fourth-biggest elevator makers in market already dominated by a few large firms. The biggest, Otis, is itself being spun off from United Technologies Corp (UTX.N) next year.

“Antitrust … is definitely a big, big hurdle for any attempt,” said Thomas Oetterli, CEO of Switzerland’s Schindler (SCHP.S), the world’s second biggest elevator maker by sales, adding it would be “incredibly difficult to get approvals”.

Thomas Hechtfischer, managing director of shareholder advisory group DSW, which typically represents 1% of Thyssenkrupp’s voting rights at annual general meetings, said there was no room for further missteps by Kerkhoff.

“The next shot needs to be a bullseye,” he said.

(For an interactive version of the graphic click here)

Further chipping away at Kerkhoff’s credibility, which has suffered from botched efforts to spin off Thyssenkrupp’s capital goods units, are plans to restructure, sell or shut down those divisions burning the most cash.

The problem is that all those subsidiaries – system engineering, springs and stabilizers and heavy plate – operate in the steel and autos sectors, industries that have come under extreme pressure in recent months.

“Why would you try and sell a bad asset in a market environment at the worst possible time?” one person familiar with the plans said.

Winding down the units, an option Kerkhoff has said was not being ruled out, will not be easy either. With a combined staff of 9,300, closing them would incur large restructuring costs at a time when Thyssenkrupp’s balance sheet is already stretched.

Some analysts argue that far greater job cuts are needed. Bucephalus Research estimates that sacking 30,000 people, or 19% of total staff, is necessary for a serious overhaul but it would involve restructuring costs of about 3 billion euros.

Without an injection of cash from a sale of ET, Kerkhoff would struggle to fund even a portion of these layoffs – even if powerful labor representatives, who control half of the 20 seats on Thyssenkrupp’s supervisory board, give the go-ahead.

“We are prepared for change but not at any price,” said Markus Grolms, vice chairman of Thyssenkrupp’s supervisory board and trade secretary at Germany’s most powerful union, IG Metall. “Swinging the axe does not address the group’s problems.”

Grolms said it needed to improve the operating performance of its divisions, most of which are lagging rivals, echoing comments from the Alfried Krupp von Bohlen and Halbach Foundation, Thyssenkrupp’s largest shareholder with a 21% stake.

Tapping new growth markets and developing innovative products would also require substantial funds, putting pressure on Kerkhoff to get his next move right after a series of setbacks, including four profit warnings under his watch.

“Thyssenkrupp faces a very challenging situation. The market environment and the economy have continued to deteriorate,” the foundation said, adding that it supported the company’s strategic path and remained convinced of its potential.

“The foundation wants the company to be competitive in its operating businesses, providing secure jobs and a sustainable ability to pay dividends.”