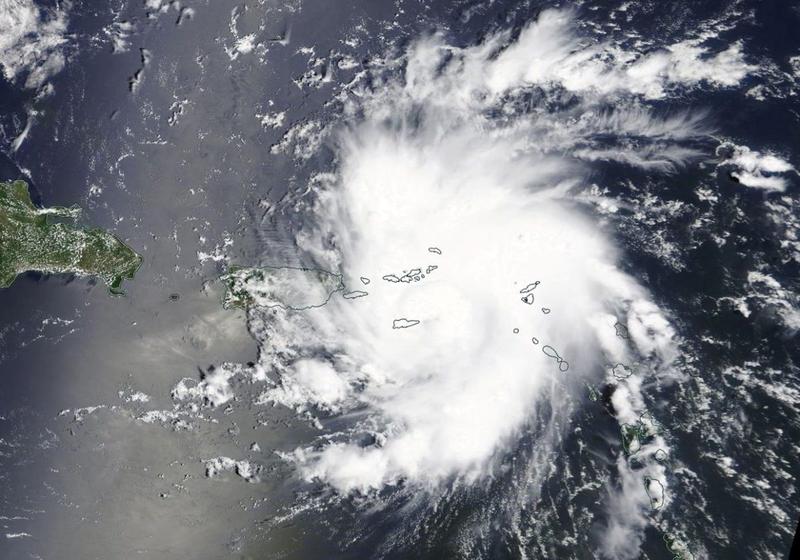 MIAMI (Reuters) – Florida’s governor on Thursday extended a state of emergency to the whole state ahead of the arrival of Hurricane Dorian, which is forecast to strengthen into a highly dangerous Category 4 storm during the weekend before hitting the Atlantic coast.

Governor Ron DeSantis took the step as authorities canceled some commercial flights, planned precautions at rocket launch sites along the Space Coast and prepared to give out sand to residents for sandbags ahead of the storm’s arrival.

The center describes Category 4 storms as capable of causing “catastrophic damage” including severe damage to well-built homes. It said in such storms, “Most trees will be snapped or uprooted and power poles downed.”

Dorian is likely to make landfall on Florida’s eastern coast on Monday before lingering over central Florida on Tuesday but tropical storm-force winds from Dorian could begin in parts of Florida as early as Saturday evening, the hurricane center said. The storm could affect big population centers as well as major Florida tourist destinations.

“All residents, especially those along the east coast, need to be prepared for possible impacts,” DeSantis said in a statement. “As it increases strength, this storm has the potential to severely damage homes, businesses and buildings, which is why all Floridians should remain vigilant. Do not wait until it is too late to make a plan.”

The governor had declared a state of emergency for 26 counties on the east coast but extended it on Thursday to the whole of Florida.

Currently a Category 1 hurricane, Dorian was headed toward the Bahamas on Thursday after sideswiping Caribbean islands without doing major damage. Dorian is expected to strengthen and slam the Bahamas and the southeastern United States with rain, strong winds and life-threatening surf over the next few days.

Dorian was packing maximum sustained winds of 85 miles per hour (137 km per hour) on Thursday morning some 220 miles (355 km) north-northwest of San Juan, and about 370 miles (600 km) east of the Bahamas, the hurricane center said.

“Hurricane Dorian looks like it will be hitting Florida late Sunday night,” Trump wrote on Twitter. “Be prepared and please follow State and Federal instructions, it will be a very big Hurricane, perhaps one of the biggest!”

Jim McKnight, city manager of Cocoa Beach on central Florida’s Atlantic coast, made sure construction sites were secured with possible dangers like scaffolding taken down to prevent flying objects.

“We’re worried. This is not looking good for us. We woke up a lot more scared than we went to bed last night, and the news is not getting any better,” said Angela Johnson, 39, bar manager at Coconuts On The Beach, a Cocoa Beach bar and restaurant on the town’s surfing beach.

Hurricane Dorian is shown in this photo taken by NASA’s Terra satellite MODIS instrument as it nears St. Thomas and the U.S. Virgin Islands as it continues its track toward Florida’s east coast August 28, 2019. NASA Worldview, Earth Observing System Data and Information System (EOSDIS)/Handout via REUTERS

The biggest hurricane to have come ashore in the area in recent history was Jeanne in 2004, which made land around Port St. Lucie as a Category 3 storm.

“Dorian is expected to become a major hurricane on Friday, and remain an extremely dangerous hurricane through the weekend,” the hurricane center said, warning of an increasing likelihood of life-threatening storm surge along portions of Florida’s east coast late in the weekend.

Two flights from the Orlando International Airport to Puerto Rico were canceled.

The Universal Orlando Resort theme park, owned by Comcast Corp, said it was following the approaching storm closely. Walt Disney Co, which operates the Walt Disney World Resort in Orlando, did not return requests for comment.

The Cape Canaveral space center said it would close Saturday afternoon with a skeleton team of roughly 100 staff staying behind in the launch control room to monitor the storm and the site’s aerospace assets.

NASA’s Kennedy Space Center said it would move a 400-foot (122-meter) tall, $650-million mobile launcher structure used to assemble the agency’s rocket for future moon missions from a launchpad and into a building to take shelter during Dorian’s likely impact.

The University of Central Florida, one of the largest U.S. universities by student population, said its main campus in Orlando will close on Friday afternoon.

The storm was forecast to approach on Saturday the northwest of the Bahamas, a popular tourist spot, the hurricane center said. Officials of the nation’s northernmost island Grand Bahama urged residents on Wednesday evening to secure houses and businesses immediately.

Reporting by Zach Fagenson in Miami and Gabriella Borter in New York; Additional reporting by Andrew Hay, Helen Coster in New York and Joey Roulette in Washington; Writing by Alistair Bell; Editing by Will Dunham