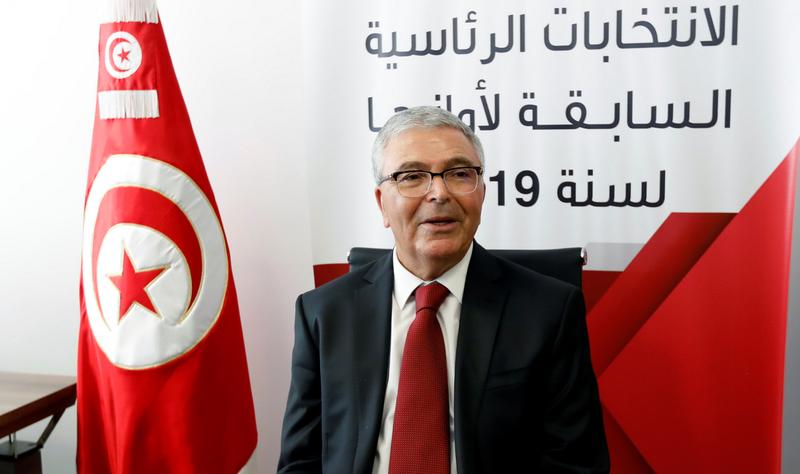 TUNIS (Reuters) – Tunisia’s Defence Minister Abdelkarim Zbidi will amend the constitution if he wins September’s presidential election to end an “unreasonable” division of power between the prime minister and the head of state, he told Reuters, a move rivals oppose.

Zbidi, among a few prominent candidates in a field of 26, is supported by some secular parties, but he said in a Reuters interview on Tuesday that he is ready to work with the moderate Islamist Ennahda.

He also said he would quickly reopen Tunisia’s embassy in Syria, citing a need for security cooperation and the difficulties faced by Tunisians living there.

Despite economic troubles, Tunisia has had a smoother march towards democracy than any of the other Arab nations that tried to follow its example in 2011 by throwing off autocratic rule, and it will also hold a parliamentary election in October.

On the constitution, he did not say whether he would prefer to switch to a wholly parliamentary system or a presidential one, saying this was something that should be decided in a referendum.

The constitution agreed in 2014 after years of rule by strongman president Zine El-Abidine Ben Ali split power between the president and a government chosen by parliament.

Though directly elected, the president only controls foreign and defense policy, while most other powers are held by the prime minister, proposed by the biggest party in parliament.

“The constitution disperses powers and decisions between the prime minister and the president,” said Zbidi, 69, speaking in French.

“This is unreasonable. The lack of efficiency in this hybrid system disrupts economic recovery and democratic transition,” he added.

The constitution’s shortcomings became clear over the past two years during disagreements between the president and prime minister.

However, the possible amendment of a constitution agreed by parliament only five years ago after difficult negotiations between rival parties, could prove divisive.

Ennahda, along with some civil society organizations, has rejected the move, saying it is too early to judge a constitution that has not yet been fully implemented.

Some bodies mandated by the constitution, including a new Constitutional Court, have not yet been set up.

Zbidi, a technocrat and medical doctor by training, is supported by secular parties including Nidaa Tounes of his close ally, the late president Beji Caid Essebsi.

He has served twice as defense minister, from 2011-2013 and again since 2017 in coalition governments that included both Ennahda and secular parties.

Though some secularists have rejected sharing power with Ennahda again after the coming elections, Zbidi said he would do so if the country’s interests required it.

“Everyone knows that I am independent and I do not accept any directions from any party. But I am willing to work in harmony with everyone for the benefit of Tunisia,” he said.

Asked if that included Ennahda, he said it did “as long as they do not impose any lifestyle on Tunisians and respect their freedoms”.

Restoring ties with Syria, broken off after President Bashar al-Assad crushed mass pro-democracy protests in 2011, could prove controversial in Tunisia, where the Arab Spring began.

However, Zbidi said the move was needed for the sake of Tunisians living in Syria and to coordinate on security after many Tunisians traveled to Syria to join the jihadist Islamic State group.