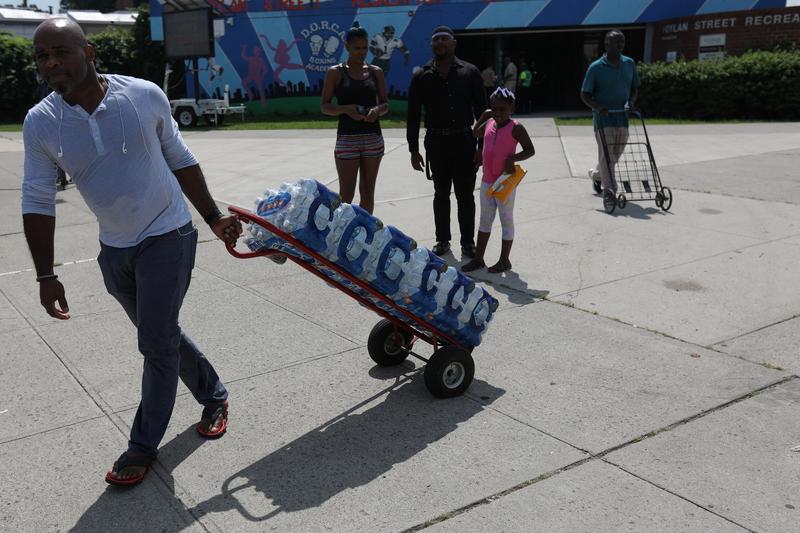 FILE PHOTO: A man wheels cases of bottled water distributed for free from a recreation center as residents in some parts of the city continue to face a water crisis after high levels of lead were found in their drinking water in Newark, New Jersey, U.S., August 15, 2019. REUTERS/Shannon Stapleton/File Photo

(Reuters) – New Jersey unveiled a $120 million plan on Monday to speed up the replacement of old lead pipes in Newark in response to mounting alarm about the toxic metal leaching into the drinking water in the state’s largest city.

Newark officials began handing out bottled water to some residents earlier this month after tests found that some of the water filters they had previously distributed were not working properly.

The city earlier said it would take eight years to replace lead service lines connecting some 15,000 residential buildings across the city to the Pequannock reservoir system, at a cost of $75 million.

The new plan announced on Monday, funded by a new bond issuance by Essex County, would have those pipes all replaced within two to three years.

“We all know that we have to work faster and harder and together, importantly, to restore residents’ trust in their water,” New Jersey Governor Phil Murphy said at a news conference on Monday. He was joined by Newark Mayor Ras Baraka and Essex County Executive Joseph DiVincenzo Jr.

In October 2018, city officials began giving out some 38,000 water filters to residents to eliminate lead, which can cause health problems, especially in children, even at microscopic levels. The same kind of filters have been used in Flint, Michigan, a city that drew national attention in 2015 after children were poisoned by lead in the drinking water.

After testing of those filters found problems this month, the U.S. Environmental Protection Agency joined New Jersey officials in saying affected residents should use only bottled water for drinking and cooking.

A Reuters investigation in 2016 found nearly 3,000 places in the United States with lead poisoning rates much higher than those seen in Flint, in many cases caused by decades-old flaking lead paint or aging lead pipes.