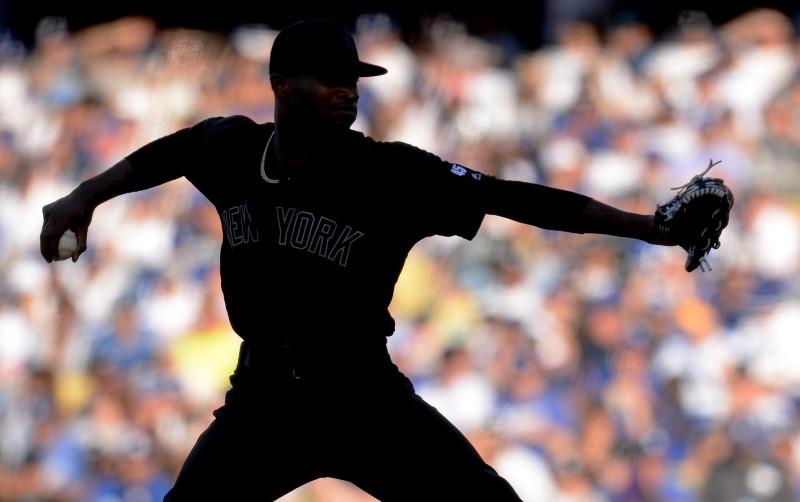 Domingo German pitched six strong innings, and the New York Yankees hit three home runs off Clayton Kershaw in a 5-1 victory over the Los Angeles Dodgers that gave them two of the three victories in an interleague series between two of the best teams in baseball.

DJ LeMahieu, Aaron Judge and Mike Ford each hit home runs against Kershaw (13-3), as the Yankees went deep nine times in the series. Judge hit a home run in all three games as New York set a major league record for homers in any month, now sitting at 61 with five games left in August.

Kershaw had 12 strikeouts without a walk and held the Yankees to only four hits over seven innings, but the three home runs gave him 21 allowed on the season, his second most after the 23 he allowed in 2017.

Not only did LeMahieu hit a home run to lead off the game, but Dodgers leadoff hitter Joc Pederson hit his own first-inning home run. It was the fourth time in the major leagues this season that both leadoff hitters opened with a homer.

Howie Kendrick scored the go-ahead run on a wild pitch in the 11th inning, Anthony Rendon went 4-for-5 with a homer and two RBIs, and Washington held on for a win over host Chicago to complete a three-game sweep.

Asdrubal Cabrera also drove in a pair of runs for Washington, which has won five games in a row, seven of eight and 12 of 14. The Nationals claimed the season series 4-2 against the Cubs.

Addison Russell, Victor Caratini and Kyle Schwarber homered in a losing effort for Chicago. The Cubs were swept at Wrigley Field for the first time this season.

The Braves have won eight straight. The recent three-game losing streak is the second in August for the Mets, who entered Sunday with the best record in the majors (27-12) since the All-Star Break.

Keuchel (5-5) allowed four hits and walked three while striking out seven. The Mets got just two runners into scoring position against the 31-year-old left-hander. The outing was the longest scoreless appearance of the season for Keuchel, who signed with the Braves on June 7.

The Phillies, who are in playoff contention, lost two of three over the weekend to the Marlins, who are 35 games under .500 at 47-82. The Phillies are 7-9 against the Marlins this season, having lost seven of their past nine head-to-head meetings.

The Marlins beat Phillies starter Aaron Nola (12-4), who had gone 6-1 since the start of July before the loss. Even though the Marlins have the worst record in the National League, Nola is 0-2 against them this season in three starts.

Archie Bradley retired Christian Yelich with two on and two out in the ninth inning, and Arizona held on for victory over host Milwaukee.

The Diamondbacks held a 5-0 lead thanks to a big day from Christian Walker and five scoreless innings from Robbie Ray (11-7) in his return from a brief injured-list stint due to back tightness. Walker hit a two-run homer in the first inning against Zach Davies (8-7), collected three hits and fell a triple shy of the cycle.

Ray returned after being out since Aug. 14 and held Milwaukee to three hits. He struck out six, worked around four walks and improved to 6-1 in his last nine starts.

Carpenter finished with three hits, and Dexter Fowler drove in three runs for the Cardinals, who have won seven of their last eight and increased their National League Central lead to 2 1/2 games over the Cubs.

Nolan Arenado homered and had three hits for the Rockies, who have lost six of their last seven.

Evan Longoria grounded a go-ahead, two-run single into left field with one out in the seventh inning, propelling San Francisco over host Oakland and a two-game sweep of its interleague series.

Longoria finished with three RBIs for the Giants, who completed a 5-4 road trip. Donovan Solano went 4-for-4 with a walk, RBI and run scored.

Manny Machado capped a three-run first inning with a franchise-record-setting home run as San Diego defeated visiting Boston to avoid being swept in a three-game series.

Machado’s homer was the 190th hit by the Padres this season, eclipsing the club’s former single-season record of 189 set in 2017.

Santander homered and added four singles. He drove in two runs and scored twice, while Nunez and DJ Stewart both went 3-for-4 to spark a Baltimore offense that finished with 16 hits.

The victory let Baltimore split the four-game series with Tampa Bay after losing the first two contests. Villar became the sixth player in Oriole history to hit at least 20 homers (this was homer No. 20) and steal at least 20 bases (he has 28 this season).

Ryan O’Hearn capped his two-homer performance by going deep to lead off the 10th inning as visiting Kansas City averted a series sweep by beating Cleveland.

After Franmil Reyes completed his sixth two-homer performance of the season with a game-tying three-run shot in the ninth inning, O’Hearn regained the advantage by depositing a 2-2 fastball from Nick Goody (3-1) over the wall in right field.

Jorge Soler launched a two-run homer to ignite a five-run eighth inning, and Nicky Lopez drove in three runs for the Royals, who had mustered just five runs over the course of their previous four games, all defeats.

C.J. Cron hit a three-run home run, and Jonathan Schoop added a two-run blast to lead Minnesota over Detroit in the rubber game of their three-game series in Minneapolis.

The Twins increased their American League Central lead to 3 1/2 games over Cleveland. The Twins, who increased their major league-leading home run total to 253, won just their second home series since the All-Star break.

Framber Valdez returned from his stint in the minors and delivered six strong innings as Houston completed a three-game series sweep of visiting Los Angeles.

Valdez (4-6) was 0-4 with a 15.55 ERA over his previous four appearances with the Astros before being optioned to Triple-A Round Rock after his start on July 15. The 25-year-old left-hander proved exceptional in his return, allowing one run on two hits and five walks with eight strikeouts.

The Astros, 6-1 on their current 10-game homestand, managed two runs against Angels right-hander Jaime Barria (4-7), who nearly matched Valdez in effectiveness. The Angels closed their seven-game road trip at 1-6.

Gonzales (14-10) allowed one run on three hits, with two walks and five strikeouts. Toronto right-hander Clay Buchholz (0-3), making his first appearance since May 5 because of a back strain, went six innings, allowing two runs on three hits.

Bryan Reynolds went 2-for-4 with a three-run triple as Pittsburgh hung on to beat visiting Cincinnati for a three-game series sweep.

Kevin Newman was 4-for-4 with an RBI single and three runs scored, and Jose Osuna and Starling Marte each had RBI doubles for Pittsburgh. Kyle Farmer, Josh VanMeter and Eugenio Suarez homered for Cincinnati.

Pittsburgh rookie starter Dario Agrazal (3-3) pitched five innings, giving up four runs and seven hits. Felipe Vazquez gave up a homer but got a four-out save, his 23rd of the season. Cincinnati starter Trevor Bauer (10-11) lasted only three innings, allowing eight runs, seven of them earned, and eight hits.

Five pitchers combined on a one-hitter, and Jose Abreu drove in a pair of runs as host Chicago edged Texas to take three of four games in the weekend series.

Chicago won for the fifth time in seven games behind a sterling pitching effort that began with Reynaldo Lopez and continued with Aaron Bummer, Evan Marshall and Jace Fry. Alex Colome worked around a one-out walk in the ninth to record his 25th save.

Lopez (8-11) earned the victory, holding the Rangers hitless over five innings while scattering one hit batsman, two walks and six strikeouts. He threw 52 of his 80 pitches for strikes before leaving the game early with dehydration and flu-like symptoms.