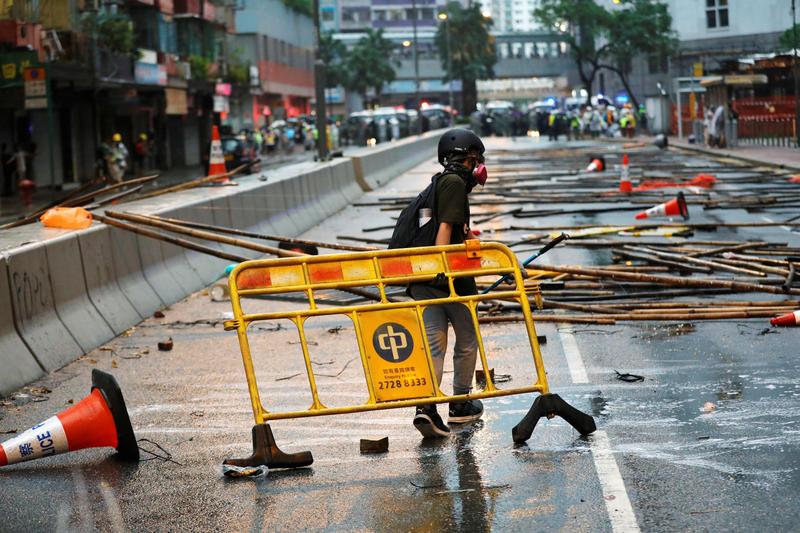 HONG KONG (Reuters) – Illegal violence is pushing Hong Kong to the brink of great danger, the city government said on Monday, after a weekend of clashes that included the first gun-shot and the arrest of 86 people, the youngest just 12.

An anti-extradition bill protester carries a barricade for blocking the road during a protest in Hong Kong, China, August 25, 2019. REUTERS/Willy Kurniawan

Police fired water cannon and volleys of tear gas in running battles with protesters who threw bricks and petrol bombs on Sunday, the second day of weekend clashes in the Chinese-ruled city.

Six officers drew their pistols and one officer fired a warning shot into the air, police said in a statement, adding that 215 rounds of tear gas and 74 rubber bullets were fired over the two days.

“The escalating illegal and violent acts of radical protesters are not only outrageous, they also push Hong Kong to the verge of a very dangerous situation,” the government said in a statement.

The protests began in mid-June over a now-suspended extradition bill that would have allowed Hong Kong people to be sent to mainland China for trial.

But the demonstrations have evolved over 12 straight weeks into a broad demand for greater democracy in the financial hub that was promised a high degree of autonomy under a “one country, two systems” formula when it was handed to China by colonial ruler Britain in 1997.

More demonstrations are planned in the days and weeks ahead, including a rally at Hong Kong’s Cathay Pacific Airways (0293.HK) headquarters on Wednesday to protest against perceived “white terror”, a term used to describe anonymous acts that create a climate of fear.

Cathay has emerged as the biggest corporate casualty of the protests after China demanded it suspend staff involved in, or who supported, the anti-government demonstrations that have plunged the city into its biggest crisis since 1997.

On Saturday, activists threw petrol bombs and bricks in the gritty industrial district of Kwun Tong, on the east of the Kowloon peninsula. Some protesters cut down “smart” lamp posts equipped with surveillance cameras.

The protests pose the gravest popular challenge to Chinese President Xi Jinping since he took power in 2012, with his government keen to quell the unrest ahead of the 70th anniversary of the founding of the People’s Republic of China on Oct 1.

Protesters again adopted cat-and-mouse tactics on Sunday evening, gathering then quickly dispersing, only to reappear in other places.

They also set up barricades to block some roads, following a largely peaceful rally earlier in the day.

Police said the 86 arrested people were aged 12 to 52, and they were suspected of offences including unlawful assembly, possession of offensive weapons and assaulting police officers.

Twenty-one officers were injured in the violence, they said.

The weekend clashes marked a return to violent unrest after days of calmer demonstrations.

The protests have occasionally caused serious disruption including forcing the closure of the airport.

China has denounced the protests, warned of the damage to Hong Kong’s economy and complained of outside interference.

It has also sent a clear warning that forceful intervention is possible, with paramilitary forces holding drills in Shenzhen, just over the border from Hong Kong in mainland China.The protesters say they are fighting the erosion of the “one country, two systems” arrangement under which Hong Kong returned to China with the promise of freedoms, not enjoyed on the mainland, for 50 years.

But the turmoil is taking a toll.

The world’s biggest equity deal this year was to unfold in Hong Kong later this month but it has been put on hold. Banks are issuing unprecedented profit warnings, while hotels and restaurants are half-empty.

Several major conferences and trade fairs have been postponed and economists say retail sales could drop by 20%-30% this year.