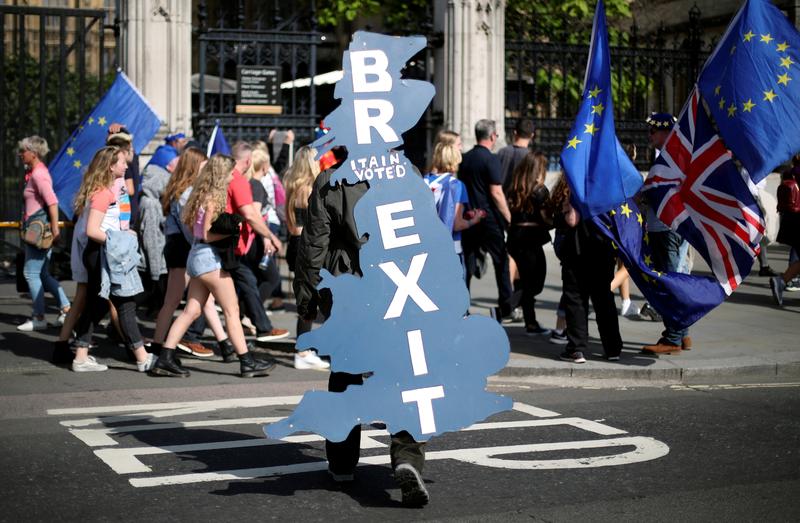 BIARRITZ, France (Reuters) – EU leaders should pay no heed to British lawmakers who say they can stop Brexit, a senior UK government source said on Monday, repeating Prime Minister Boris Johnson’s line that Britain will leave the bloc on Oct. 31 with or without a deal.

Britain has yet to agree a deal with the European Union on the terms of its departure, raising the prospect of an unmanaged exit which is forecast to disrupt the flow of goods and people at the British border.

Fearful that a “no-deal exit” would trigger long-term and widespread economic damage, some UK lawmakers – including members of the ruling Conservative Party – have vowed to do whatever it takes to prevent one – much to Johnson’s annoyance.

“We are leaving on October 31 with or without a deal.European leaders should not be listening to the very wrong messages emerging from some parliamentarians who think that they will be stopping Brexit,” said the official, who spoke on condition of anonymity.

The official was speaking in the French seaside resort of Biarritz on the sidelines of a meeting of leaders of the Group of Seven leading world economies.

Previous votes in the UK parliament have indicated there is a small majority in favour of blocking a no-deal exit, although it is unclear if they will have the opportunity to successfully thwart Johnson’s plan.

While Johnson’s government is adamant that parliament cannot delay or reverse Brexit, lawmakers are considering several options, ranging from a vote of no-confidence in the government to passing laws requiring the prime minister to request more negotiating time from the EU.

Johnson and his supporters accuse those opposed to a no-deal Brexit of undermining Britain’s negotiating position and its chances of securing last-minute concessions from the EU.

Johnson said in Biarritz on Sunday ahead of talks with EU Council president Donald Tusk that Britain would not legally owe the 39 billion pounds divorce bill if it left without a deal.

EU diplomats will be watching the British parliament closely when it reconvenes on Sept. 3 to assess whether lawmakers are able to take the no-deal option off the table.