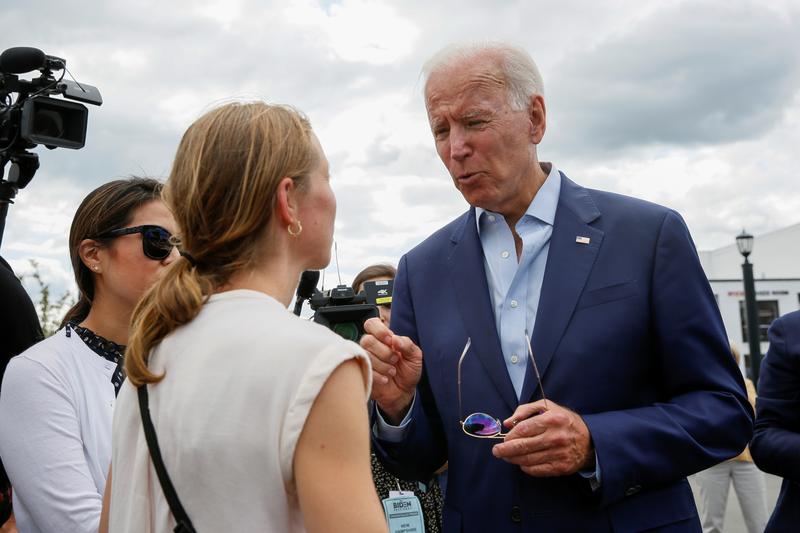 Biden crisscrossed the state on four different campaign stops from Hanover to Keene on Friday and Saturday before attending a fundraiser in New York City. The trip was vintage Biden: folksy anecdotes, lots of handshakes and a few gaffes.

The Biden crowds, relatively small and older, said they are exhausted by Trump. They see Biden as a unifier whose experience can bring some much-needed normalcy to the White House, and the former vice president’s largest applause lines came when preaching that unity.

“The president has decided to be president for his base. I will be a president for every American. People know who Donald Trump is; we need to let them know we are,” Biden said to large applause at an event at Keene State College in Keene, New Hampshire.

New Hampshire is an important state for Biden, who could potentially clear the field if he could pull off a win here and Iowa, the first two primary tests next year, said Phillip Barker, a political scientist at Keene State College. But, Barker added, Biden could survive losing the Granite State, unlike Elizabeth Warren and Bernie Sanders, who hail from neighboring states.

“A win in New Hampshire and Iowa for Biden would make him an extremely formable candidate, but he has the money and name recognition to survive,” Barker said.

The tour, which came as most of his rivals attended the party’s annual conference in California, marked his fourth visit to the state since announcing his bid for president in April, and he vowed to return so much that people may soon get tired of seeing him.

Biden came into New Hampshire with lingering questions about his ability to energize the party, notably its progressive wing that views him – and his policies – as anachronistic.

Biden told a crowd at Dartmouth College that his healthcare plan – which preserves the most popular parts of Obamacare and builds on them with a new government-run public insurance option – costs roughly $740 billion, not the multi-trillion dollar price tag of some of his opponents who are pushing Medicare for All plans.

He also said he gives workers options, not ultimatums.

“If you have a plan that is already working, you are in entitled to keep it. If you are not satisfied, you will have a public option,” Biden said.

Reuters spoke to roughly 25 attendees at the campaign events, and the overwhelming majority said the biggest draw to Biden was his electability.

Bill Swinburne, a 76-year-old psychiatrist from Marlborough, New Hampshire, said he personally prefers Warren but if the election were held now he would pull the lever for Biden.

“I just don’t think Warren can win the Midwest states. The Republicans are going to brand her a socialist,” Swinburne said.

Biden on Saturday strolled into Lindy’s Diner – a campaign stop staple in Keene where he ate a grilled cheese sandwich and milkshake – and took a seat with Molly Lane, a 67-year-old retired non-profit worker.

She hugged him and said, “You need to hustle and get Trump out of the White House.” Biden replied, “I am trying.”

Afterwards, Lane spoke to reporters and said, “I hugged him; he didn’t hug me,” a nod to criticism about Biden’s history of being “touch-feely” that has come under new scrutiny in the #MeToo era.

Biden took an odd detour at the end of his first event on Friday when he noted his political heroes, Martin Luther King Jr. and Robert Kennedy, were assassinated and asked students if they could imagine if Barack Omaba met the same fate.

Biden was asked his feeling about New Hampshire and the town of Keene outside Lindy’s Diner on Saturday, and he seemed to forget where he was.

“What’s not to love about Vermont in terms of the beauty of it? I mean this is sort of a scenic, beautiful town,” Biden told reporters.

While the gaffes have long been part of Biden’s legacy, at age 76, they raise new questions about his fitness for office for some voters. Several people interviewed at the rallies said they were attending because they wanted to see him in person to judge his crispness and vitality.

“Age is certainly an issue, and I think he needs to show he’s up for the job at this time,” Al Cirone, 71, said while waiting in line for a Biden event on Friday. Cirone said Biden was his top choice, citing his experience and more moderate stance.

Biden was asked by a reporter on Saturday if his age should be a concern. He replied, “I say if they’re concerned, don’t vote for me.”