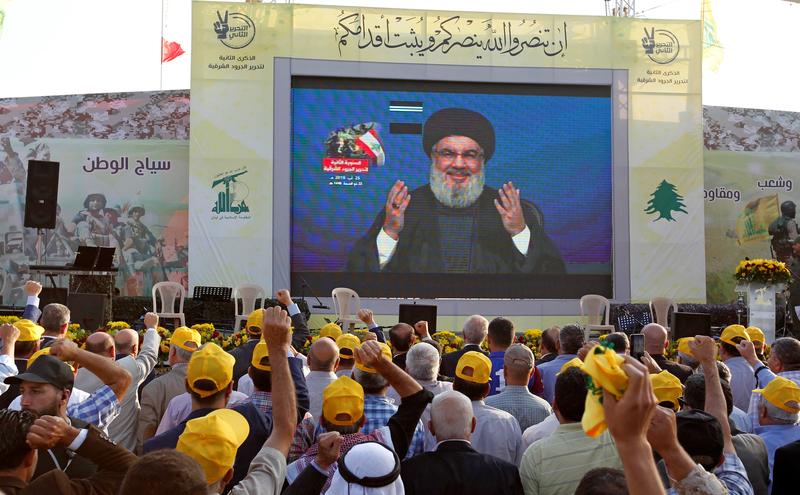 BEIRUT (Reuters) – Hezbollah leader Sayyed Hassan Nasrallah on Sunday warned the Israeli army stationed along the border with Lebanon that his movement was preparing an imminent response to two Israeli drones which crashed overnight in a suburb of Beirut.

Lebanon’s Hezbollah leader Sayyed Hassan Nasrallah gestures as he addresses his supporters via a screen during a rally marking the anniversary of the defeat of militants near the Lebanese-Syrian border, in al-Ain village, Lebanon August 25, 2019. REUTERS/Aziz Taher

Nasrallah, whose Iran-backed movement fought a one-month war with Israel in 2006, issued the toughest warnings to his enemy in years.

“We are in a new stage,” Nasrallah said in a televised speech, referring to the group’s long enmity with Israel.

He said the “suicide drone” attack was intended for a specific target and was a “very, very, very dangerous development” and that everything possible would be done to prevent a repeat.

In the first such incident in more than a decade, one drone fell and second exploded before dawn near the ground and caused some damage to Hezbollah’s media center in the southern suburbs of the capital which it dominates, a Hezbollah official told Reuters.

Nasrallah said it marked “the first clear, big, dangerous, breach of the rules of engagement drawn up in 2006” after the end of the 2006 conflict between Israel and Hezbollah.

“If we keep quiet on this violation, this will lay a dangerous path for Lebanon,” he said, adding that unstopped drone attacks could lead to a situation similar to what is happening in Iraq.

Iraq’s Popular Mobilisation Forces (PMF), a grouping of Iraq’s mostly Shi’ite Muslim paramilitary groups, many of which are backed by Iran, on Wednesday blamed recent blasts at their weapons depots and bases on the United States and Israel.

“We will not allow the clock to be turned back, we will not allow Lebanon to be violated by bombardment, killing or explosions, nor the violation of sanctities. This for us is a red line,” said Nasrallah.

Although Israel has not claimed the Beirut attack, Nasrallah said it was the first Israeli attack inside Lebanon since 2006.

“The new aggression … constitutes a threat to regional stability and an attempt to push the situation toward further tension,” Hariri said in a statement from his office.

The incident took place hours after the Israeli military said its aircraft had struck Iranian forces and Shi’ite militias near Syria’s capital Damascus which it said had been planning to launch “killer drones” into Israel.

War monitor the Syrian Observatory for Human Rights said two members of Hezbollah, one Iranian and two more people of an unknown identify were killed in the Israeli strikes.

The Israeli military said its aircraft struck “Iranian Quds Force operatives and Shi’ite militias which were preparing to advance attack plans targeting sites in Israel from within Syria over the last number of days”.

“Iran has no immunity anywhere. Our forces operate in every sector against the Iranian aggression,” said Netanyahu on Twitter. “If someone rises up to kill you, kill him first.”

In Tehran, a senior Revolutionary Guards commander denied that Iranian targets had been hit in the Israeli air strikes in Syria, the semi-official ILNA news agency reported.

Lebanon has complained to the United Nations about Israeli planes regularly violating its airspace in recent years.

Residents in Dahiyeh said they heard the sound of a blast. A witness said the army closed off the streets where a fire had started. A Hezbollah spokesman told Lebanon’s state news agency NNA the second drone was rigged with explosives causing serious damage to the media center.

Israel has grown alarmed by the rising influence of its regional foe Iran during the war in neighboring Syria, where Tehran and Hezbollah provide military help to Damascus. Israel says its air force has made hundreds of strikes in Syria against what it calls Iranian targets and arms transfers to Hezbollah.

Russia, which also helps Assad, has largely turned a blind eye to the Israeli air strikes

Syrian state media said air defenses confronted the “aggression” and the army said most of the Israeli missiles were destroyed.

The United States and Iran are at odds over Tehran’s nuclear program and the Gulf, with both sides trading accusations over threats to the strategic waterway’s security.

Amos Yadlin, a former head of Israeli military intelligence, said neither Iran nor Israel were interested in all-out war.

“We’re not there yet,” he said on Israel Radio. “But sometimes, someone makes a mistake.”