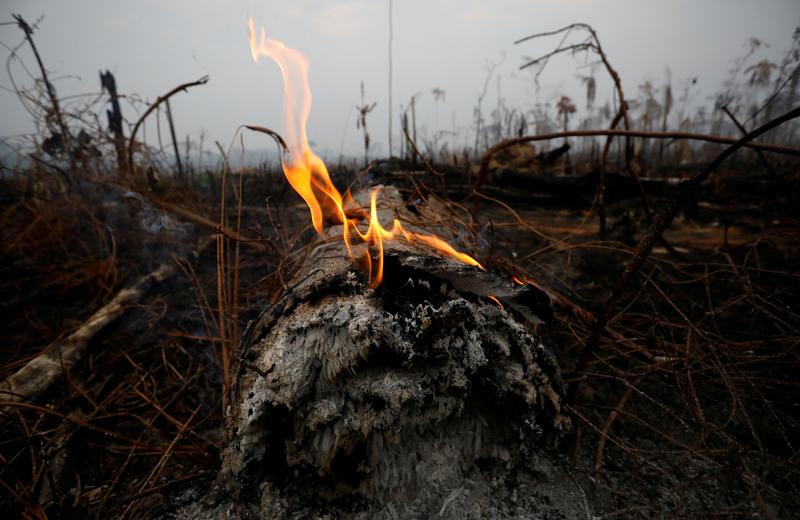 BRASILIA (Reuters) – Six states in Brazil’s Amazon region requested military help on Saturday to combat record fires that are tearing through the rainforest, provoking an international outcry because of the Amazon’s central role in combating global warming.

FILE PHOTO: A tract of Amazon jungle is seen after a fire in Boca do Acre, Amazonas state, Brazil August 24, 2019. REUTERS/Bruno Kelly/File Photo

The states of Para, Rondonia, Roraima, Tocantins, Acre and Mato Grosso – out of the region’s nine – have requested military assistance, according to a spokeswoman for the president’s office, a day after President Jair Bolsonaro authorized the military to step in.

The Amazon is the world’s largest tropical rainforest and its protection is seen as vital to the fight against climate change because of the vast amounts of carbon dioxide it absorbs.

Brazil has 44,000 troops stationed in its northern Amazon region that are available to combat forest fires and could send more from elsewhere in the country, said Raul Botelho, the joint chief of staff for the country’s military.

In a briefing with reporters, Botelho and other officials did not say how many troops would be involved and gave few operational details of how they would be used and where.

Defense Minister Fernando Azevedo said forces would be concentrated in certain areas depending on the individual mission.

For example, in Porto Velho in Rondonia state, two planes would be made available that have capacity to carry 12,000 liters of water mixed with fire retardant, as well as an infantry brigade, river patrol forces and the local office of the Defense Ministry’s Amazon monitoring unit, he said.

On Saturday, fewer than 50 personnel will be sent from Brasilia to Porto Velho in Rondonia state to support operations there, including 30 firefighters and 18 communications specialists, Botelho said.

Alfredo Sirkis, executive director of think tank Brazil Climate Center and a founder of Brazil’s Green Party, said while he supported military involvement, he doubted that anyone would be able to put out the existing fires.

“Once you have a huge forest fire like that, especially when you don’t have all the kind of forest fire-fighting equipment that you have in places like the U.S. or Portugal, it’s difficult to extinguish,” he said. “They’ll only be extinguished by themselves depending on the weather conditions.”

The military can help to prevent additional forest fires by enforcing environmental laws and stopping people from setting the fires, Sirkis said.

Environmentalists have said that farmers clearing land for pasture were responsible for the uptick in fires.

Similarly, Sirkis blamed the fires on speculators seeking to clear the land they hope to later sell for farming, saying they have been emboldened by Bolsonaro’s strong rhetoric in favor of development of the Amazon region.

Bolsonaro enraged critics on Wednesday when he accused non-governmental organizations of burning down the Amazon rainforest to hurt his government. But on Thursday he admitted for the first time that farmers might be involved in lighting fires in the region.

Reporting by Jake Spring in Brasilia; Editing by Matthew Lewis and Leslie Adler