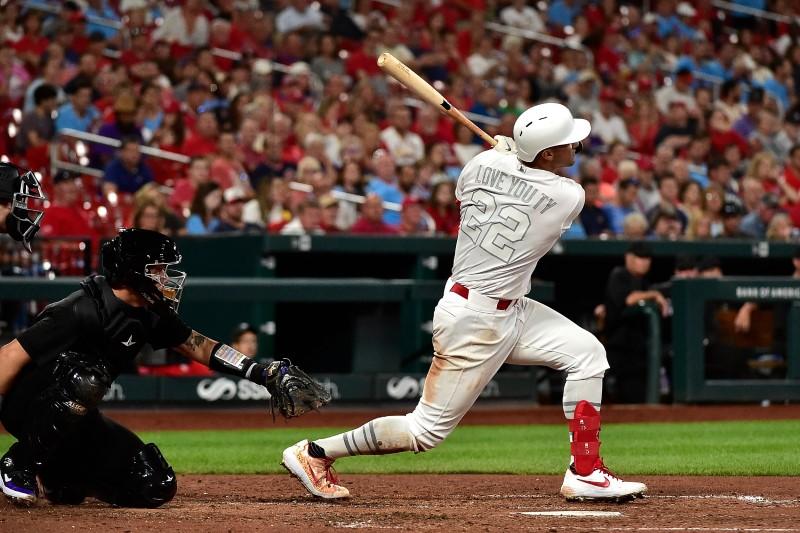 Marcell Ozuna homered and drove in three runs, Yadier Molina went 3-for-5 and three other St. Louis batters had two hits each. The Cardinals moved a half-game ahead of the Chicago Cubs for first place in the National League Central Division.

Nolan Arenado had two hits and reached all four times he came to the plate for Colorado, which has lost four of five since sweeping a home series against Miami.

Flaherty (8-6) didn’t allow a hit until Yonathan Daza led off the fifth inning with a single. Before that, the Rockies only had three base runners — one on a walk and two hit batsmen.

Rodriguez (15-5) entered the game with the highest run-support average in the major leagues at 7.85 runs per game. The Red Sox scored three runs in each of the first two innings, one in the fourth and four in the sixth.

Anibal Sanchez held Chicago to one hit in 8 1/3 innings, and Adam Eaton and Juan Soto homered to lead visiting Washington to victory.

The sizzling Nationals have won 10 of 12 and kept their hold on the top wild-card spot in the NL. Chicago’s five-game winning streak came to an end.

Sanchez (8-6) struck out six and allowed a single earned run in his longest outing of the season, and also logged his second career two-hit game. He hasn’t taken a loss since May 10.

Billy Hamilton laced the tiebreaking single in the 14th inning night to cap a taut pitchers’ duel and lift visiting Atlanta to a win over New York in the opener of a three-game series.

The Braves have won six straight. The Mets had their five-game winning streak snapped.

Tyler Flowers led off the 14th by drawing a walk against Jeurys Familia (4-2), the Mets’ eighth pitcher. Adeiny Hechavarria, who was designated for assignment by the Mets on Aug. 9 and signed by the Braves seven days later, followed with a ground-rule double to center field that got wedged in the bottom of the fence. After Rafael Ortega struck out, Hamilton followed with his single past a drawn-in infield.

Three relievers followed Lyles and finished a combined two-hitter. Lyles, who also had an RBI single, is 3-1 in five starts since being acquired from the Pittsburgh Pirates at the trade deadline.

Zack Greinke remained unbeaten over his four starts since joining Houston at the trade deadline despite pitching in and out of trouble in a victory over visiting Los Angeles.

After falling into a 2-0 hole in the second inning, Greinke (14-4) darted in and out of effectiveness and departed with two outs in the seventh inning with a one-run lead despite allowing 10 hits and recording only one strikeout.

Greinke induced an inning-ending double play in the third, worked around leadoff doubles from Kole Calhoun in the fourth and Matt Thaiss in the fifth, and initiated another inning-ending double play in the sixth after the Angels scratched across an unearned run in the inning that cut the deficit to 4-3. Greinke helped his own cause by not allowing a walk.

Ronny Rodriguez hit a grand slam to highlight a five-run sixth inning, and Dawel Lugo and Harold Castro each had two doubles and a single to lead Detroit over host Minnesota in Minneapolis.

Rodriguez went 3-for-5 with two runs and a stolen base, and Miguel Cabrera, Jordy Mercer and Travis Demeritte each had two of Detroit’s 17 hits.

Drew VerHagen (4-2), making just his fourth start of the season and the eighth of his six-year career, held the Twins to three runs on five hits while striking out a career-high 11. He fanned five in a row during the third and fourth innings.

Meadows also homered in Thursday’s come-from-behind 5-2 win, but that was a solo shot. This game was a different story, as Meadows’ first career grand slam broke things open pretty quickly and gave the Rays command.

Tampa Bay also received a strong effort from starter Trevor Richards (4-12). This was just his second game — and start — since coming to the Rays from Miami in a July 31 deal, and he threw six shutout innings, giving up only two hits while striking out five and walking one.

Starlin Castro came off the bench to slug two homers and drive in five runs as host Miami rallied from a seven-run deficit with 19 hits to set a season high in runs and defeat Philadelphia.

The Marlins, who have the worst record in the National League, rallied from a 7-0 deficit, tied the score with a seven-run third, fell behind again and then produced a five-run fifth. The Phillies never recovered, and the 19 runs were the second most the Marlins have ever scored at home.

Not all news was good for the Marlins, however, as Brian Anderson was hit by a pitch and suffered a broken hand, likely ending his season.

The offense proved to be enough for the Indians, who snapped a three-game losing skid overall and improved to 11-6 against the Royals this season.

Rookie Zach Plesac (7-4) allowed one run on four hits in 5 2/3 innings to pick up the win. The 24-year-old improved to 3-0 in four starts against Kansas City this season, including permitting a total of three runs (two earned) and 10 hits in 13 innings in two wins last month.

With the Pirates trailing 2-1 in the ninth against Reds closer Raisel Iglesias (2-9), Colin Moran led off with a single, then left for pinch runner Erik Gonzalez. Jose Osuna singled, and Adam Frazier tied it at 2-2 with a bloop single to drive in Gonzalez.

Joe Musgrove replaced Osuna at second, and he and Frazier moved up on Jacob Stallings’ sacrifice bunt. Reyes then lined a 1-1 slider to left to give the Pirates eight straight home wins against the Reds. Rookie sensation Aristides Aquino was 3-for-4 with a homer and an RBI double for Cincinnati, which had its two-game win streak snapped.

Right-hander Dylan Cease struck out a career-high nine batters in six strong innings, and Yoan Moncada homered for the second time in as many games since returning to from the injured list to lift host Chicago over Texas.

The White Sox won their second straight to open the four-game series and prevailed for the fourth time in five games overall. Moncada, Leury Garcia, Tim Anderson and Jon Jay had two hits apiece, and Anderson extended his hitting streak to 10 games.