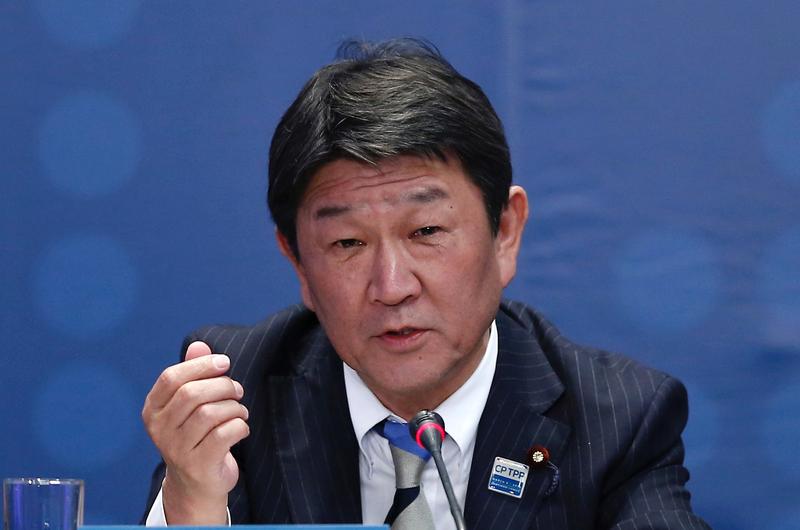 TOKYO (Reuters) – The United States and Japan have reached the broad framework of a trade agreement, Japan’s Nikkei business daily said on Saturday, with Tokyo making concessions on its agriculture but none immediately apparent from Washington on automobiles.

The newspaper did not cite any sources for its information.

The results of the Lighthizer-Motegi talks will be announced at a meeting between U.S. President Donald Trump and Japanese Prime Minister Shinzo Abe expected on Sunday on the sidelines of the Group of Seven summit in Biarritz, France, the Nikkei said.

The report came shortly after Motegi told reporters in Washington that he and Lighthizer had made “big progress”.

Motegi said the three-day talks that ended on Friday would probably be the last ministerial-level discussions and working-level officials would continue to hammer out on details.

Japan will cut its tariffs on U.S. beef and pork to the levels applied to members of the Trans-Pacific Partnership (TPP) agreement, the Nikkei said. Trump pulled America out of the TPP, which had been championed by his predecessor, Barack Obama.

The United States will not cut the 2.5% tariff it applies on Japanese autos for now but separate talks on those would continue, the Nikkei reported. It said Washington was “moving in the direction” of scrapping tariffs on some of the 400 types of Japanese car parts that Tokyo is seeking.

Trump and Abe may sign the pact in late September if they can reach a final deal, the Nikkei said. They were expected to meet then on the sidelines of the United Nations General Assembly.

“I think how we proceed the talks from now on, and the time schedule, will be announced at the summit meeting scheduled in Biarritz,” Motegi said.

He said Abe and Trump would confirm the progress that was made at the ministerial meetings and decide how to proceed.

“We have been making efforts to narrow gaps,” Motegi said.

“We negotiated to protect Japan’s position, our position on agriculture,” he said.

Japanese officials had previously said Tokyo could cut tariffs to TPP levels but no further.

Motegi and Lighthizer initially planned two days of talks but negotiations extended to a third day on Friday in an effort to narrow differences on areas such as agriculture and automobiles.

Trump is unhappy with Tokyo’s large trade surplus and he could pile pressure on Japan to curb its auto exports to the United States and open its highly protected agriculture market to fix what he calls unfair trade imbalances.

Motegi declined to comment on details but said the negotiations were based on the two nations’ joint statement in September.

Trump will talk to his counterparts during his visit to France about how to open up their markets to ensure U.S. businesses have avenues to sell goods and services.

The United States and China are also engaged in an expensive trade dispute that has disrupted financial markets worldwide.