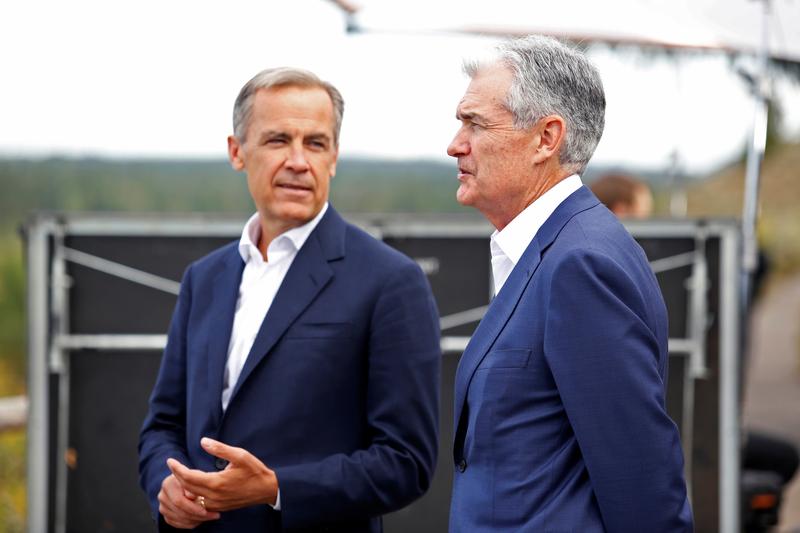 JACKSON HOLE, Wyo. (Reuters) – Bank of England Governor Mark Carney said Britain’s economy appeared to be on course to stagnate in the current quarter, and underlying growth still looked muted even when the effect of Brexit volatility was stripped out.

Carney, in a speech at the Jackson Hole gathering of global central bankers in the United States on Friday, said a snapshot of Britain’s economy suggested it was “currently close to equilibrium, operating just below potential”.

Britain’s economy shrank during the three months to June for the first time since the global financial crisis, due in large part to a surge in activity earlier in the year as companies rushed to get ready for an original Brexit deadline.

At the start of this month the BoE forecast growth of 0.3% for the current calendar quarter.

But business surveys over the course of August have painted a lacklustre picture.

“The UK economy contracted slightly last quarter and surveys point to stagnation in this one,” Carney said. “Looking through Brexit-related volatility, it is likely that underlying growth is positive but muted.”

However, Britain’s job market has remained strong, with near record-low unemployment and the fastest wage growth in 11 years.

Carney said global economic momentum remained soft despite markets’ increased expectations that central banks around the world would loosen policy, but the outlook for the British economy hinged mostly on the nature and timing of Brexit.

New Prime Minister Boris Johnson has promised to take Britain out of the European Union on Oct. 31, even if that means leaving without a transition deal, risking major disruption to supply chains and trade ties.

Weak business investment was the most obvious consequence of the uncertainty over when and how Britain would leave the EU, Carney said.

“There is overwhelming evidence that this is a direct result of uncertainties over the UK’s future trading relationship with the EU, and it serves as a warning to others of the potential impact of persistent trade tensions on global business confidence and activity,” Carney said.

Carney reiterated his view that the BoE would probably have to ease monetary policy to help the economy in the event of a no-deal Brexit, though there were limits to how much it could tolerate a rise in inflation caused by a falling pound.

Although he accepted that the risk of a no-deal Brexit had increased, Carney said it was “not a given”.

If there was a delay in Brexit beyond the latest Oct. 31 deadline, the BoE would have to grapple with the opposing forces of softer domestically generated inflation and resurgent imported inflation, he added.

But if Britain and the EU did reach a Brexit deal before Oct. 31, paving the way for a transition to their new relationship, that would probably require limited and gradual interest rate increases, Carney said, repeating the BoE’s long-standing message on borrowing costs.