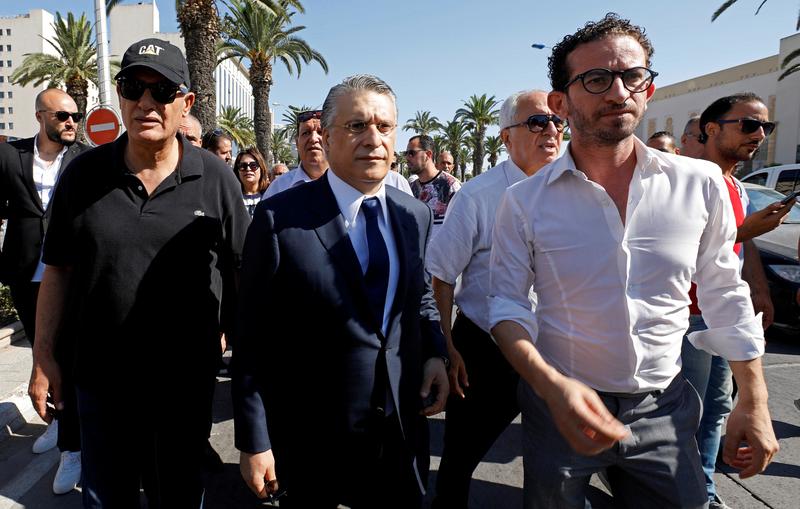 TUNIS (Reuters) – Tunisian police arrested presidential candidate Nabil Karoui on Friday after a court ordered his detention, the Interior Ministry said, in a case involving charges of money laundering but which Karoui’s party said was a politically motivated attempt to exclude him from the election race.

Karoui’s own Nessma TV channel reported that the candidate had been arrested as he traveled to Tunis, and broadcast a video showing the police detaining him in his car.

The 56-year-old media magnate is one of the main candidates contesting the Sept. 15 election following the death of President Beji Caid Essebsi.

A judge ordered the detention of Karoui to face charges of tax evasion and money laundering, Mosaique FM radio reported.

A judge decided in July this year to bar Karoui from traveling abroad after weeks of investigation on suspicion of money laundering.

“The police arrested Karoui while we were on our way back from the city of Beja to Tunis,” said Osama Khelifi, a political adviser to the candidate. “They kidnapped the most prominent candidate in the presidential election so that (Prime Minister Youssef) Chahed can win the election in an open way,” he added.

Samira Chaouachi, spokeswoman of Karoui’s Heart of Tunisia Party, said it was “a political arrest aimed at keeping Karoui out of the presidential race.”

“This is a judicial matter that has nothing to do with the government and came after a complaint from ‘I watch,’ a civil society organization,” a government official told Reuters rejecting what he called “‘allegations.”

Chahed and Karoui are among 26 candidates running for the presidency following Essebsi’s death last month at age 92. Essebsi was the first head of state to be democratically elected in Tunisia following the popular uprising of 2011.

Tunisia’s president controls foreign and defense policy, governing alongside a prime minister chosen by Parliament who has authority over domestic affairs.

Karoui founded the Khalil Tounes Foundation in 2017 to fight poverty, the main theme in his campaign.

In April, police stormed the offices of Nesma channel, which promotes Karoui’s candidacy and career, and took it off the air over accusations that it had breached broadcasting rules. Nesma said it was a move to stop it criticizing the government.