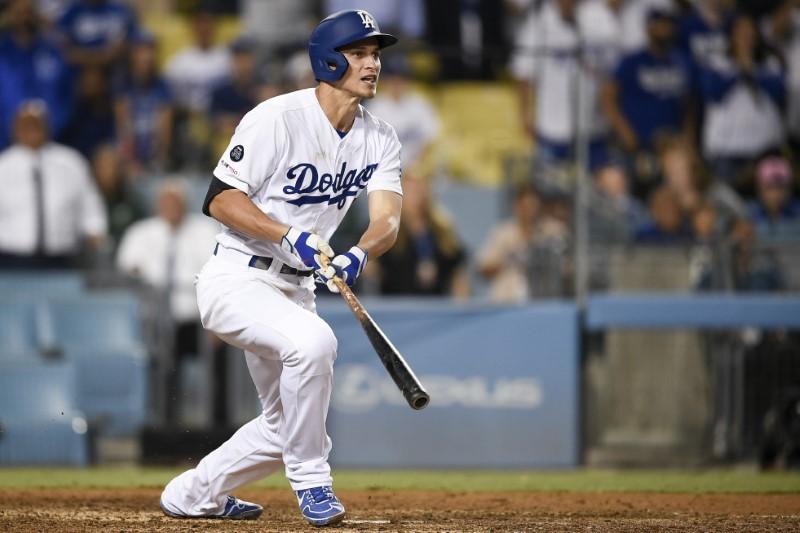 Corey Seager tied the game with a two-run double and Enrique Hernandez capped a second straight walk-off win with an RBI single Thursday night as the Los Angeles Dodgers rallied in the bottom of the ninth to stun the Toronto Blue Jays 3-2 and complete a three-game sweep.

The comeback occurred after Blue Jays rookie Jacob Waguespack and two relievers had combined on a one-hit shutout through eight innings, with Toronto using just four hits, including a solo home run by Vladimir Guerrero Jr., to claim a 2-0 lead.

With closer Ken Giles unavailable because he was put on paternity leave earlier in the day, Derek Law (0-2) walked Max Muncy to open the ninth and, after getting one out, allowed a double to Cody Bellinger.

Seager followed with his game-tying hit, and three pitches later, Hernandez ended it with a blooper to center field.

Kyle Hendricks outdueled Jeff Samardzija in a battle of right-handers, and Chicago completed a three-game sweep of visiting San Francisco.

Anthony Rizzo’s two-out single scored Jason Heyward in the fourth inning with the game’s only run, sending the Cubs to their fifth straight win. Chicago had two hits in the fourth — and none the rest of the game.

Hendricks (9-9) went seven innings, allowing three hits and no walks. He struck out seven. The 29-year-old allowed just one Giant to reach scoring position, that coming in the second inning when Brandon Belt lashed a one-out double.

Syndergaard’s bid for New York’s second no-hitter in team history ended when Tyler Naquin singled up the middle in the sixth inning.

Syndergaard struck out five, walked none, threw 73 pitches and improved to 6-1 in his last seven home starts.

Tanner Roark tossed 6 1/3 strong innings for host Oakland, who rode a three-run first inning to a win over New York and a sweep of the three-game series.

The Athletics have won seven of eight. The Yankees were swept in a three-game series for the first time since the Houston Astros took three in a row April 8-10.

Roark (8-8), making his fourth start since he was acquired from the Cincinnati Reds at the trade deadline, allowed two runs on seven hits and no walks while striking out seven. He is 2-1 with a 2.63 ERA for the Athletics.

Willy Adames homered and later added a tie-breaking double as visiting Tampa Bay rallied for a victory over Baltimore.

Adames finished 3-for-4 with three RBIs, and that made up for two costly first-inning errors that helped Baltimore score twice.

The game was delayed by rain for 2 hours, 16 minutes in the bottom of the fifth inning, knocking Tampa Bay starter Ryan Yarbrough and Baltimore’s Asher Wojciechowski out of the game.

Yoan Moncada belted a two-run home run in his return to the lineup, and Ross Detwiler pitched six strong innings to lift host Chicago past Texas.

James McCann followed Moncada’s blast with another home run as part of a four-run third inning. Chicago won for the third time in four games behind a 10-hit attack.

Detwiler (2-3) earned his first win since June 28, limiting the Rangers to one run on three hits with a career-high eight strikeouts and zero walks. Elvis Andrus reached Detwiler for a home run with two outs in the fourth for the Rangers’ lone run.

Howie Kendrick and Anthony Rendon homered and right-hander Max Scherzer made a successful if truncated return from injury as visiting Washington earned a victory over Pittsburgh.

Washington won three of four games in the series, outscoring the Pirates in the four games 32-6.

Victor Robles and Asdrubal Cabrera added RBI singles for the Nationals, who broke things open with a four-run eighth.

Brock Holt hit a game-winning single in the bottom of the 10th inning to lead host Boston past Kansas City in the completion of a suspended game.

Holt’s liner down the left-field line drove in pinch runner Chris Owings and brought an end to a contest that originally began Aug. 7. The score was tied at 4 in the top of the 10th when heavy rains forced a delay of 1 hour and 49 minutes that ultimately led to the decision to call for a suspension.

The resumption, a mutual off day for both clubs – lasted all of 12 minutes before Holt’s game-winning hit. The Royals had flown in from playing in Baltimore on Wednesday.

Marcell Ozuna and Paul DeJong also hit two-run home runs for the Cardinals, who won for the 10th time in 13 games. They remained a half-game behind the first-place Chicago Cubs in the National League Central.

Gerrit Cole maintained his dominant form despite missing a turn in the rotation and Houston claimed a four-game series victory over visiting Detroit.

He posted 12 strikeouts to match the franchise record of 14 double-digit strikeout outings set by J.R. Richard in 1978 and matched in 1979.

Ronald Acuna Jr. singled with two out in the ninth to drive home Adeiny Hechavarria with the winning run and give Atlanta a win over visiting Miami.

Hechavarria started the inning with a double to left field against Ryne Stanek. Hechavarria advanced to third on a long fly ball by pinch-hitter Charlie Culberson and scored on Acuna’s hit.

It was the Braves’ third walkoff win over the Marlins this season.