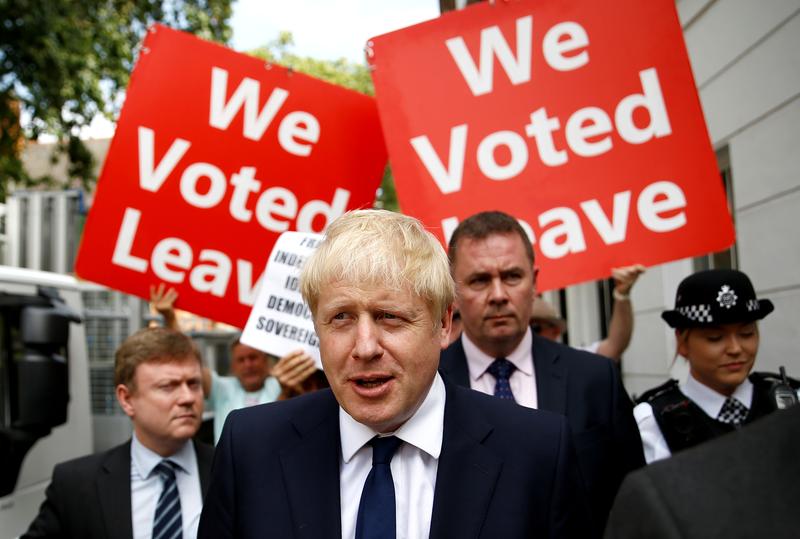 LONDON/PARIS/BERLIN (Reuters) – After sterling soared and some British newspapers roared at a supposed Brexit victory for Prime Minister Boris Johnson, Europe’s power brokers had a more sobering message: the basic divorce deal is not changing.

Three years after the United Kingdom voted to leave the European Union, the outcome of the tortuous Brexit crisis remains unclear, with options ranging from an acrimonious rupture on Oct. 31 to a smooth, amicable exit or even another referendum.

Enter PM Johnson, an avowed Brexiteer whose bet is that the threat of a disorderly ‘no-deal’ exit will convince German Chancellor Angela Merkel and French President Emmanuel Macron that the EU must grant him the divorce deal he wants.

On his first foreign trip as prime minister, the response from Germany and France was polite but firm: the Withdrawal Agreement struck last year by then-prime minister Theresa May will not be changed much. And time is ticking.

“I want to be very clear,” Macron said. “In the month ahead, we will not find a new withdrawal agreement that deviates far from the original.”

In Berlin, Merkel used a puzzling remark about finding an answer in “30 days” to underscore just how little time remained before the Oct. 31 Brexit deadline and how complex the Irish border riddle was.

Johnson, who allowed himself to put one of his feet on a coffee table at the Elysee Palace in a light moment with Macron, lauded Europe for “positive noises” and insisted a deal could be done, possibly in the “final furlong”.

Sterling, which has gyrated to the tune of the Brexit divorce, had its biggest jump in three months on Thursday as some investors bet that even the possibility of some change to the Brexit deal meant a compromise could be reached.

But in Berlin, Paris and Brussels, there was astonishment at the interpretation that there had been a major shift in EU policy.

By 1100 GMT on Friday, investors were reassessing whether British Prime Minister Boris Johnson had made any progress. Sterling, which had jumped more than 1% against the dollar on Thursday, was down 0.3% on the day to $1.2217. [GBP/]

Johnson’s key demand is that the EU remove the Irish border backstop – an insurance policy that would keep the United Kingdom in a customs union with the EU unless a better solution is found to keep open Ireland’s 500-km (300-mile) land border with the British province of Northern Ireland.

As the backstop would also keep Northern Ireland aligned to the rules of the EU’s single market, Johnson and the Northern Irish party that props up his government see the backstop as a threat to UK unity – and their own political survival.

Britain says there must be a better solution, though it has yet to present one.

But part of the problem is that there is suspicion in Europe that Johnson is using Brexit diplomacy to line up a potentially vote-winning confrontation with the EU ahead of a possible British election.

Merkel is keen to ensure that the EU is not seen as being unwilling to talk – but is equally keen not to reopen the Withdrawal Agreement. Rather, as has been EU policy for some time, changes would be addressed in the non-binding declaration on future ties.

Still, Berlin was impressed that Johnson had been serious and accepted publicly that if there was to be progress, London would have to come up with a way to solve the Irish border issue.

In Paris, a diplomatic source said Macron was trying to appear constructive – but had not changed his stance.

France’s position, the source said, was that discussions are possible within the acceptance that the fundamental principles of the Withdrawal Agreement remain the protection of the EU single market and political stability in Ireland.

So has there been a change in the EU’s position? “No,” said one official. “No change.”