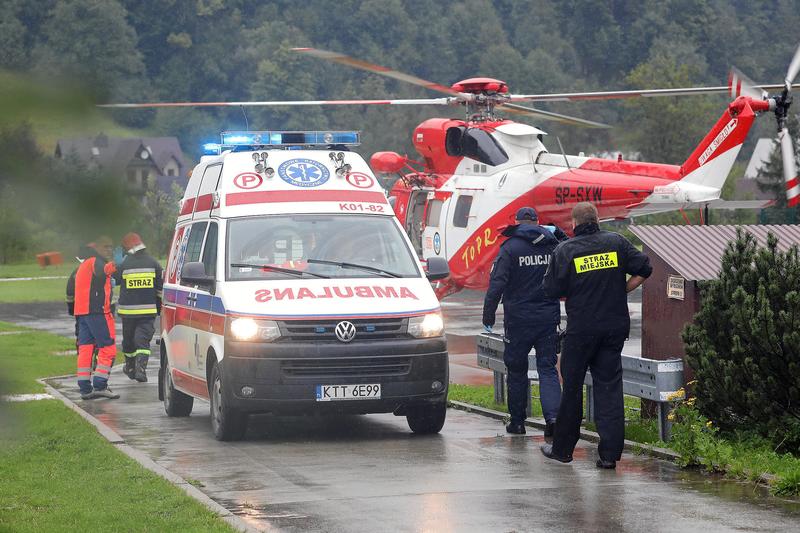 WARSAW (Reuters) – Four people, two of them children, died and more than 100 were injured during a thunderstorm in Poland’s Tatra mountains on Thursday, Prime Minister Mateusz Morawiecki said.

A TOPR (Tatra Volunteer Search and Rescue) helicopter and an ambulance are seen as rescuers conduct a rescue operation after a thunderstorm in the Tatra Mountains, in Zakopane, Poland August 22, 2019. Agencja Gazeta/Marek Podmokly via REUTERS

A fifth person was killed by the storm in the West Tatras in neighbouring Slovakia, mountain rescue services reported.

Lightning hit a group of tourists on Giewont, a 1,894-metre mountain in Poland, after a sunny morning turned stormy, according to witnesses quoted on private broadcaster TVN24.

Tourists climbing Giewont often aim to end their trip at the summit, where a 15-metre iron cross was installed in 1901. The cross is believed to attract lightning.

“Nobody expected such a sudden storm to break out and from our human point of view it was something which was impossible to predict,” said Morawiecki after a meeting of an emergency council in the southern town of Zakopane.

Other victims were hurt in different parts of the Tatra range, which spreads over 57 kilometres in southern Poland.

Joanna Sieradzka, spokesman for the Krakow Ambulance Service, said on TVN24 that five helicopters had been involved in the rescue effort.

More than two dozen rescuers were trying to save two cavers trapped in the Tatra mountains after a tunnel flooded and blocked their exit. [nL5N25E0CJ]

In the West Tatras on the Polish-Slovak border, a man was killed when lightning knocked him into a gorge, the Slovak Mountain Rescue Service said. His companion, a Czech woman, was injured. A Slovak man was hurt in a separate incident.