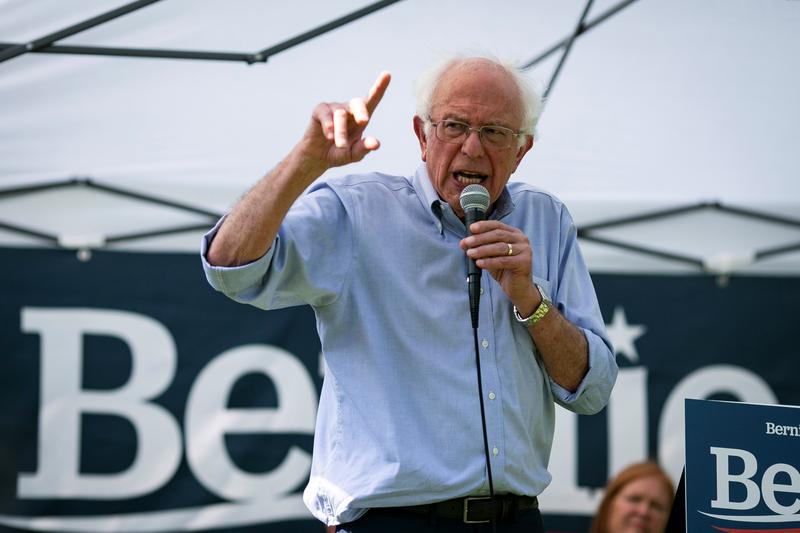 The plan would “launch a decade of the Green New Deal”, a 10-year federal “mobilization” that would factor climate change into every policy action from immigration to foreign policy while promising to create 20 million jobs in the process.

The U.S. would generate 100% of its electricity from renewable energy by 2030 and achieve “full decarbonization” by 2050, according to the plan.

“We are going to invest massively in wind, solar and other sustainable energies,” Sanders told a cheering crowd that had braved near triple digit temperatures to see him in a downtown Sacramento park.

Addressing about 5,000 people inside and outside the park, Sanders accused fossil fuel companies of being willing to destroy the planet for short-term profits.

“We cannot turn our backs on this crisis,” Sanders said. “We have got to lead the entire world in a new energy direction.”

His plan outlines dozens of policies to aggressively move the United States off fossil fuels in the electricity, transportation and building sectors.

It aims to restore U.S. leadership and financial aid under the Paris Climate Agreement and spend trillions of dollars to assist fossil fuel workers and vulnerable minority communities in the transition to a green economy.

It bans the practice of fracking to extract natural gas and oil, the import and export of fossil fuels and sets a moratorium on nuclear power plant license renewals.

Sanders’ plan comes a day after Washington state Governor Jay Inslee, who made climate change the centerpiece of his campaign, dropped out of the race for the Democratic party’s nomination to try to unseat Republican Donald Trump as president in 2020.

Sanders and some of his rivals were set to address a meeting of the Democratic National Committee in San Francisco on Friday.

More than half of the two dozen Democratic presidential hopefuls have endorsed or embraced the concept of a Green New Deal, a reference to the job creation and economic stimulus programs introduced by Democratic former President Franklin Delano Roosevelt during the Great Depression of the 1930s.

A Congressional resolution by that name was introduced by rising star Democratic Congresswoman Alexandria Ocasio-Cortez and Senator Ed Markey, and calls for a 10-year, government-driven effort to decarbonize the economy through investments in clean energy, as well as social and economic justice programs.

The Green New Deal has become a political target of Trump – who denies human-caused climate change – and Republicans in Congress who call the plan socialist, radical and too expensive.

Sanders said his Green New Deal plan will “pay for itself over 15 years” by raising taxes and fees on fossil fuel companies, through revenue generated by renewable energy produced by federal power authorities, over $1 trillion in reduced military spending, and from income tax collected from the 20 million new jobs it says the plan will create.

Sanders’ plan would direct the Environmental Protection Agency to ensure the United States cuts its greenhouse gas emissions by 71% from 2017 levels by 2030.

It would help developing countries, except China, with financial aid to cut their emissions by 36% during that same period.

It would restore U.S. leadership to carry out the goals of the Paris climate agreement, which Trump said the U.S. would formally leave in 2020. It commits $200 billion to the U.N. Green Climate Fund to help poorer nations develop cleanly and cope with wilder weather and rising seas.

In Sacramento, activist Michael Monasky welcomed Sanders’ plan, saying he believed the Vermont senator, an independent who caucuses with Democrats, was a “street fighter” who could take on Trump.

Although he is pleased Sanders is tackling climate change and voted for Green Party candidate Jill Stein in 2016, Monasky said other issues were also important to him, including economic justice and Sanders’ promise of a single-payer healthcare system.

Pastor Doug Smith, who drove to Sacramento from Yuba City with his 18-year-old daughter to see Sanders, said the plain-spoken senator would “make Trump look like a fool.”

“He’s everything Trump’s not,” Smith said.