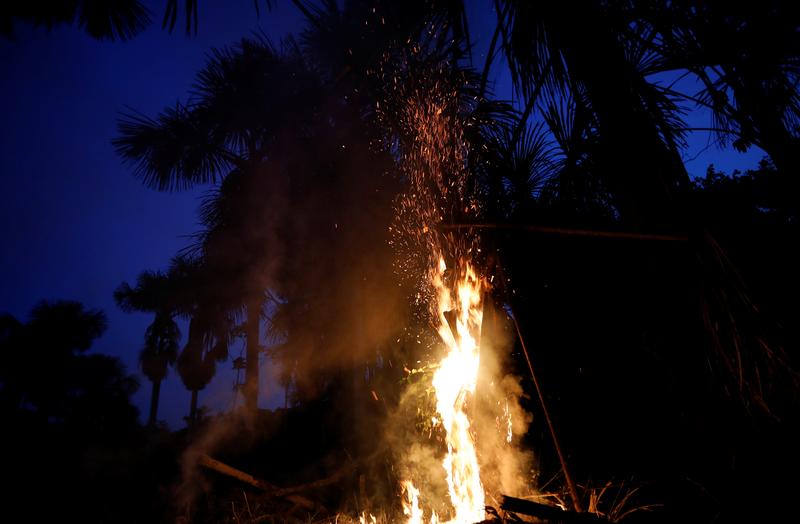 BRASILIA (Reuters) – Brazil’s President Jair Bolsonaro said on Friday he may mobilize the army to help combat fires sweeping through the Amazon rainforest, as international condemnation and pressure mounted for tough action to quell the unfolding crisis.

Having first dismissed the fires as natural, then blaming non-governmental organizations without evidence for lighting them, Bolsonaro struck a more serious note on Friday, saying he would summon top cabinet members to tailor a response.

Asked by reporters in Brasilia if he would send in the army, he said: “That is the expectation.”

Edson Leal Pujol, head of Brazil’s armed forces, said his soldiers were ready to defend the Amazon, though his words also appeared to refer to threats other than the fires.

“To the unwary who insist on safeguarding the purposes of the Brazilian Amazon, make no mistake, soldiers will always be alert and vigilant, ready to defend and repel any kind of threat,” he said at an event in Brasilia.

Forest fires in the Brazilian Amazon, which accounts for more than half of the world’s largest rainforest, have surged 83% this year, according to government data, destroying vast swathes of a vital bulwark against global climate change.

Although fires are a regular and natural occurrence during the dry season at this time of year, environmentalists blamed the sharp rise on farmers setting the forest alight to clear land for pasture.

Farmers may have had at least tacit encouragement from the firebrand right-wing president, who took power in January.

Bolsonaro has repeatedly said he believes Brazil should open up the Amazon to business interests, allowing mining, agricultural and logging companies to exploit its natural resources.

On Thursday, Bolsonaro admitted for the first time that farmers may be behind some of the fires.

FILE PHOTO: A tract of the Amazon jungle burns as it is cleared in Iranduba, Amazonas state, Brazil August 22, 2019. REUTERS/Bruno Kelly

The president is set to meet with a team that includes the defense and environment ministers and the foreign minister at 3 p.m. local time (1800 GMT).

As the fires burned, foreign pressure continued to grow. Several hundred activists protested outside the Brazilian embassies in Paris and London on Friday.

The leaders of Britain, France and Germany added their voices to an international chorus of concern, with President Emmanuel Macron’s office accusing Bolsonaro of lying when he played down concerns over climate change at the G20 summit in June.

Macron’s office added that, given this context, France would be opposed to here the E.U.-Mercosur farming deal struck earlier this year between the European Union and the Mercosur countries of Brazil, Argentina, Uruguay and Paraguay.

British Prime Minister Boris Johnson was “deeply concerned” about the fires and “the impact of the tragic loss of these precious habitats,” and would use the summit of G7 leaders this weekend to call for a renewed focus on protecting nature, a spokeswoman said.

German Chancellor Angela Merkel and France’s Macron also believed the fires should be on the G7 agenda.

Alexandre Antonelli, director of science at Britain’s Kew Royal Botanic Gardens, urged that import sanctions be imposed on Brazil because of the fires.

“Immediate action is necessary to extinguish the current fires and prevent future ones,” the Brazilian scientist said.

On Thursday, Bolsonaro responded angrily to what he saw as foreign interference.

“These countries that send money here, they don’t send it out of charity. … They send it with the aim of interfering with our sovereignty,” he said.