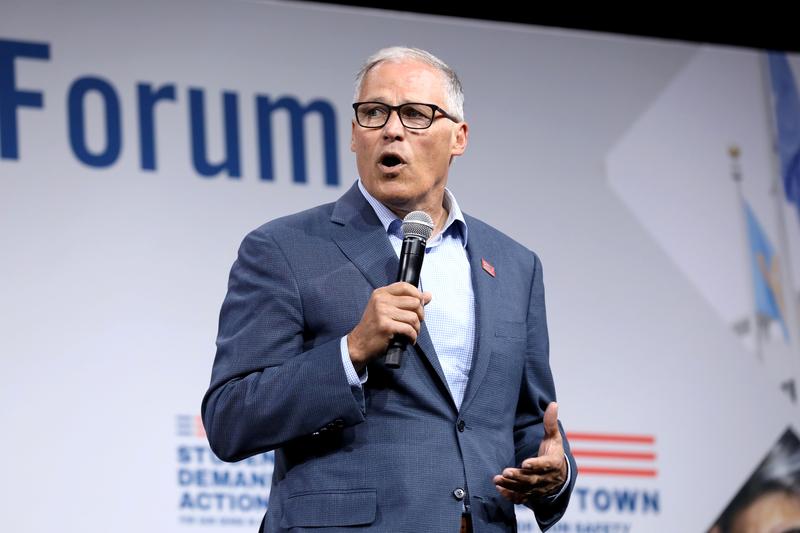 WASHINGTON (Reuters) – Washington state Governor Jay Inslee, who made the fight against climate change the focus of his White House campaign, said on Wednesday he was withdrawing from the race for the 2020 U.S. Democratic presidential nomination.

The 68-year-old Inslee, speaking on MSNBC, said it had become clear he would not be the party’s standard-bearer and that he was pulling out of the race. Inslee announced his bid for the Democratic nomination on March 1.

Democrats are vying for their party’s nomination to face Republican President Donald Trump in the November 2020 election.

Inslee, whose withdrawal brings the crowded ranks of Democratic candidates to 22, had struggled to break out of the bottom of the pack, with some polls showing him running last in the large field. He was the second Democrat this month to drop out of the race, after former Colorado Governor John Hickenlooper withdrew last Thursday.

Inslee released a sweeping plan in June to reclaim U.S. leadership in the fight against climate change that included proposals to resettle hundreds of thousands of climate refugees, and raise barriers to fossil-fuel imports.

His efforts drew praise from his Democratic competitors in the presidential race on Wednesday night.

“Thank you @JayInslee for fighting every day to make sure that climate change remains a primary focus of the election,” Senator Elizabeth Warren wrote on Twitter.

Inslee said in an email to supporters that polls had shown he was not popular enough to be invited to the party’s fall debates, and that his candidacy could not survive being left out of those high-profile events.

“It became clear that we would not meet the DNC’s polling threshold, thus we would not have been invited to the fall debates,” Inslee said. “As a result, I don’t believe we can compete for the attention and exposure needed to have a reasonable shot at the nomination.”

Painfully, perhaps, for a candidate who staked his bid on climate change, Inslee’s polling numbers of around 1 percent also appeared on track to exclude him from a televised town hall on climate issues to be held by CNN. The cable news network said candidates would need to win the support of 2% of likely voters in four polls by next week.

Inslee promised to continue to fight for political action on climate change, vowing to hold the next president accountable for adopting a plan.