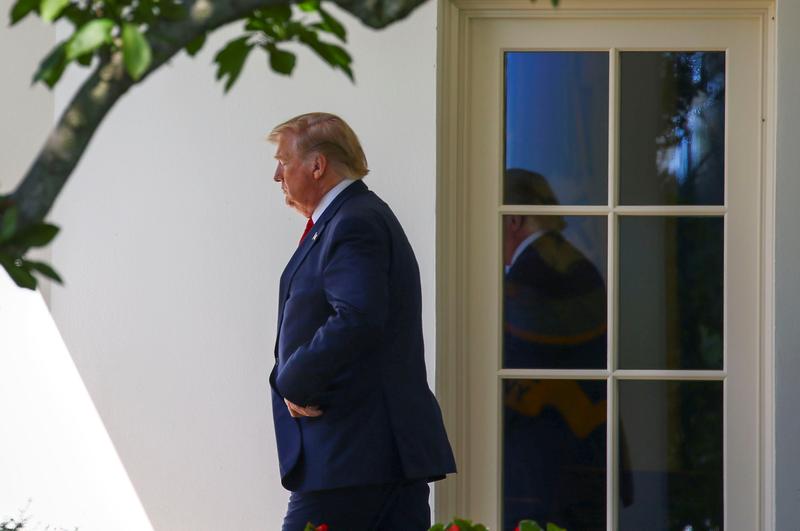 WASHINGTON (Reuters) – A federal judge on Wednesday allowed President Donald Trump to appeal key preliminary rulings in a lawsuit accusing him of violating anti-corruption provisions of the U.S. Constitution with his private business dealings, likely freezing the case for months.

U.S. President Donald Trump walks out of the Oval Office for travel to the AMVETS convention in Kentucky from the South Lawn of the White House in Washington, U.S. August 21, 2019. REUTERS/Tasos Katopodis

The written order by U.S. District Judge Emmet Sullivan in Washington was a setback for a group of about 200 Democratic lawmakers, led by Senator Richard Blumenthal and including members of the House of Representatives and Senate, who brought the case in 2017.

Sullivan previously declined such an appeal, but the U.S. Court of Appeals for the D.C. Circuit urged him last month to reconsider the president’s request.

Under Sullivan’s order, Justice Department lawyers arguing for Trump will be able to seek fast-track review of a determination that the Democratic lawmakers had legal standing to bring the case, as well as a ruling that rejected Trump’s interpretation of the constitutional language at issue in the case.

Sullivan’s order will keep on hold the “discovery” phase of the litigation, in which the Democratic lawmakers intended to serve subpoenas on Trump businesses asking about their foreign customers. The judge had halted that process in July.

The case before Sullivan accuses Trump of violating the Constitution’s so-called Emoluments Clauses, which bans the president from accepting gifts or payments from foreign governments without congressional consent.

The lawsuit alleged Trump was illegally profiting from his businesses, including by collecting payments from foreign government officials who stay at his properties and accepting trademark registrations around the world for his company’s products.

A similar case brought by the Democratic attorneys general of Maryland and the District of Columbia is pending.

The emoluments litigation, which could end up before the Supreme Court, represents the first time in U.S. history courts have interpreted that language in the Constitution and how it relates to a sitting president.

Trump, a real estate developer who as president regularly visits his own hotels, resorts and golf clubs, maintains ownership of his businesses but has ceded day-to-day control to his sons. Critics have said that is not a sufficient safeguard.

Trump has argued that Democratic lawmakers are reading the Emoluments Clauses too broadly and that the nation’s founders were prohibiting outright bribes.