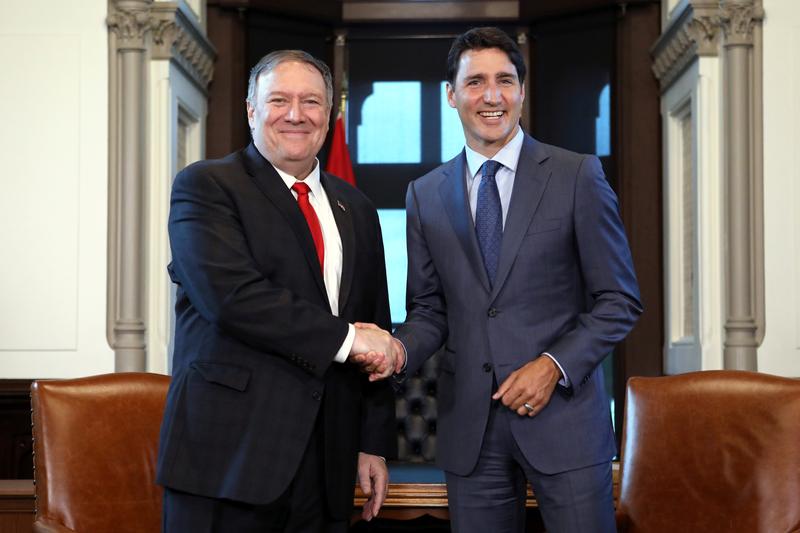 Trudeau’s government has pressed Washington to do more for the men. Trudeau said last month that U.S. President Donald Trump had raised the case during a meeting with Chinese President Xi Jinping.

“Please do note that our team is focused on helping those two Canadians be released,” Pompeo said at the start of a meeting in Ottawa with Trudeau and Canadian Foreign Minister Chrystia Freeland.

“It’s wrong that they are being held,” he added.

Pompeo was visiting Ottawa for the day ahead of a weekend summit of the Group of Seven leading industrialized nations in France where relations with China are set to be discussed.

The United States is locked in a trade war with China that is upsetting world markets.

Trudeau, speaking ahead of Pompeo, said he would be both thanking the Americans for their support on the detainees “and continuing to talk how we move forward on that.”

The Canadian leader said on Wednesday that his government had no intention of backing down in the dispute with China and would defend Canada’s interests.

In response, the Chinese embassy in Ottawa on Thursday blamed Canada for the “gross difficulties” in bilateral ties and demanded the release of Meng.

Pompeo’s visit is the latest indication of how bilateral ties have improved since hitting a low point in June 2018 when Trump called the Canadian leader weak and dishonest.

The United States, Mexico and Canada signed a new continental trade pact in November. The U.S.-Mexico-Canada (USMCA) treaty though still needs to be ratified by Canada and the United States, where some Democrats have expressed concerns about the pact’s provisions on labor.

“I want to reiterate we need to get the USMCA wrapped up and we need our parliaments both to ratify them. It will be good for the people all across North America,” said Pompeo.