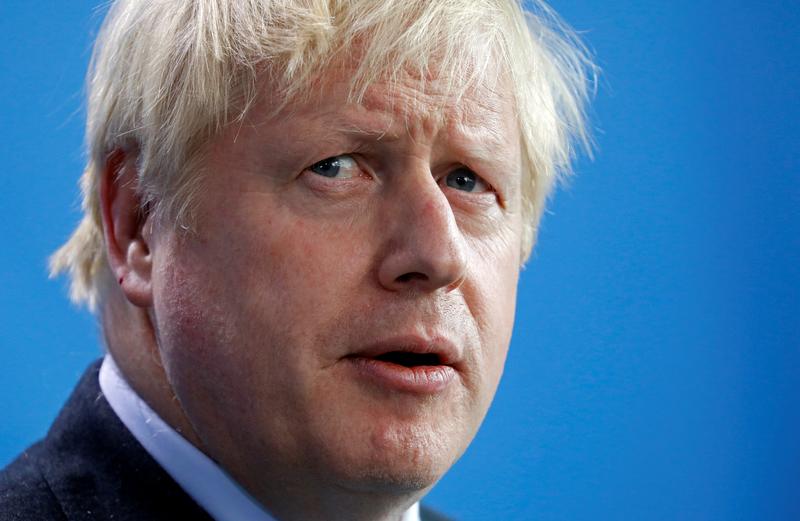 PARIS (Reuters) – British Prime Minister Boris Johnson will on Thursday try to convince France to reopen Brexit negotiations less than a day after President Emmanuel Macron bluntly ruled out any further talks on the divorce deal.

A day after German Chancellor Angela Merkel hinted at a possible path out of the Brexit impasse, Johnson faces one of his toughest diplomatic meetings to date when he has lunch with Macron in Paris.

Ahead of the meeting, Macron said Johnson’s demand to renegotiate the divorce deal was not workable and warned Britain that it risked being subordinated by the United States if it crashed out of the European Union.

“The British are attached to being a great power,” Macron said on Wednesday.

“The point can’t be to exit Europe and say ‘we’ll be stronger’, before in the end, becoming the junior partner of the United States, which are acting more and more hegemonically.”

Macron said he saw no reason to grant a further delay to Brexit unless there was a significant political change in Britain, such as an election or a new referendum.

More than three years since the United Kingdom voted to quit the European Union, it is still unclear on what terms – or indeed whether – the bloc’s second largest economy will leave the club it joined in 1973.

Johnson has spent his first month in office promising to leave the EU on Oct. 31 even if he is unable to negotiate an exit deal to dampen the impact of the split between the world’s fifth largest economy and its closest trading partner.

Having persuaded many in European capitals the threat of a so-called no deal exit is real, he is this week making his first attempts to sound out what sort of a deal could be on offer and whether it is something he can sell to lawmakers at home.

On Wednesday, Merkel challenged Britain to come up with a solution to the biggest obstacle to a deal – the future of the border between Ireland and Northern Ireland – in the next 30 days.

That was seen by British officials as a sign that the EU may end its refusal to discuss changes to an existing exit deal, which has been rejected by Britain’s parliament three times.

But just an hour after that meeting, Macron underscored the EU’s position that there would be no reopening of the Withdrawal Agreement agreed between Johnson’s predecessor Theresa May and the bloc.

An official in Macron’s office said France now saw a no-deal as the most likely scenario come and that there was not a “cigarette paper” standing between the positions of France, Germany and other EU states.

Writing by Kate Holton; editing by by Guy Faulconbridge