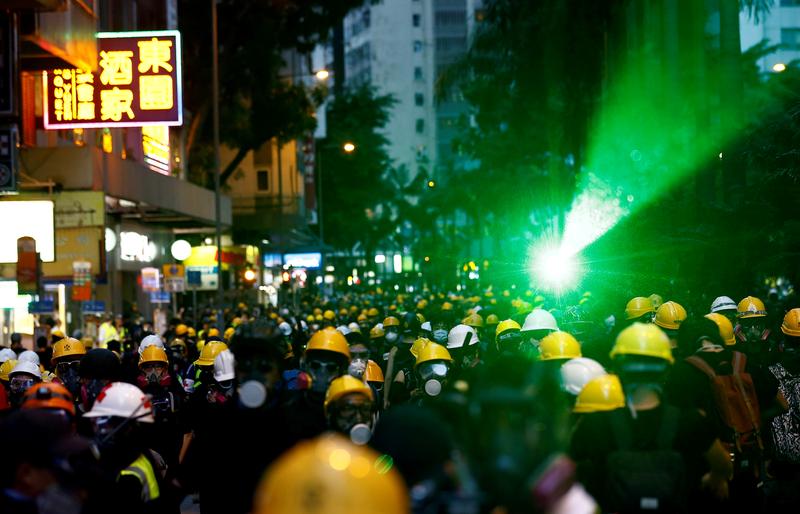 HONG KONG (Reuters) – Some of Hong Kong’s biggest banks published full-page newspaper advertisements on Thursday calling for the preservation of law and order in the Chinese territory and condemning violence, as weeks of pro-democracy protests show no sign of abating.

HSBC, Standard Chartered and Bank of East Asia, which published the advertisements in major newspapers in the Asian financial hub, all urged the restoration of social order.

Thousands of Hong Kong residents held an anti-government protest on Wednesday at a suburban subway station where demonstrators were attacked by a mob of white-shirted men last month. Protesters at the subway station on Wednesday were angry that nobody has yet been prosecuted for that violence.

The standoff stopped short of recent intense clashes with police, who refrained from using tear gas or attempting to storm protesters’ lines. Only one rock was seen hitting a police shield and most protesters headed home before midnight.

Anger erupted in June over a now-suspended bill that would allow criminal suspects in Hong Kong to be extradited to mainland China for trial but have since grown into one of the biggest populist challenges faced by Chinese President Xi Jinping since he took power in 2012.

The unrest has been fueled by broader worries about the erosion of freedoms guaranteed under the “one country, two systems” formula adopted after Hong Kong’s return to China in 1997 but not enjoyed on the mainland, including an independent judiciary and the right to protest.

A flurry of anti-government demonstrations are planned in coming weeks, including a rally by students on Thursday and another strike in districts across the city in early September.

Continuing protests could deepen the impact on the city’s economy, especially small and medium enterprises, Bank of East Asia warned on Wednesday after reporting a 75% plunge in its first-half net profit due to loan writedowns in mainland China.

The protests are already exacting a toll on Hong Kong’s economy and tourism, with the Asian financial hub on the verge of its first recession in a decade.

Standard Chartered said in Thursday’s advertisements the bank supported the special administrative region’s government to uphold social order and “guard the status of Hong Kong as an international financial center”.

HSBC said all parties must resolve disagreement through communication rather than violence. Neither HSBC nor Bank of East Asia referred to the government in their advertisements.

Hong Kong leader Carrie Lam reiterated on Tuesday that the extradition legislation was dead but has stopped short of withdrawing the bill, as protesters have demanded.

Demonstrators are also calling for an independent inquiry, a halt to descriptions of the protests as “rioting”, a waiver of charges against those arrested, and resumption of political reform.

Protests in recent weeks, which have at times drawn more than a million people onto the streets, have also included the storming of the legislature and major disruptions and violence at the airport.

Beijing has reacted sharply and has accused foreign countries, including the United States, of fomenting unrest. China has also sent clear warning that forceful intervention is possible, with paramilitary forces holding drills in neighboring Shenzhen.