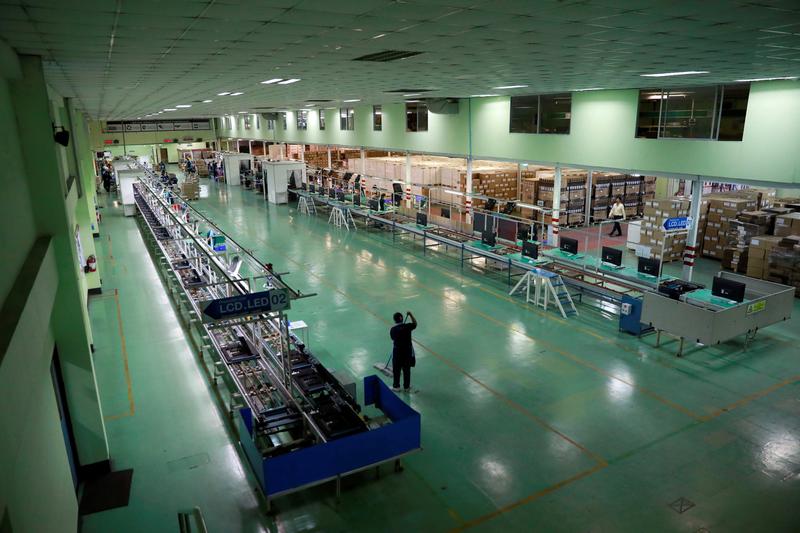 HONG KONG (Reuters) – When Larry Sloven heard last year that U.S. tariffs threatened his China electronics business, he knew that setting up shop elsewhere would be a slog rather than an adventure.

A worker cleans the floor near a TV assembly line, at a factory in Bangkok, Thailand July 22, 2019. REUTERS/Soe Zeya Tun

The 70-year-old had spent half his life building supply chains in southern China to produce goods for big-box U.S. retailers. But he had never reshuffled one on short notice, with tariffs hanging over his head.

“It is the hardest thing I’ve ever had to do in all my 30 years in the business,” said Sloven, president of Capstone International HK Ltd, a division of Florida-based Capstone Companies.

Sloven, a native of Long Island, New York, cut his teeth in Asia in the 1970s sourcing lighting products from Japan. He then moved to Taiwan and then mainland China, making and sourcing electrical products for AT&T and Duracell, before becoming a buying agent for sporting goods retailer Dick’s.

He joined Capstone in 2012 to manage its network of Chinese manufacturers from Hong Kong.

Rising labor costs and tighter regulations in China had already led him to consider moving the business elsewhere in Asia. But the trade war forced his hand.

Through dozens of interviews and phone, Whatsapp and email exchanges over a year, Reuters documented Sloven’s quest to uproot his supply chain operation, an effort entailing many close calls, bureaucratic headaches – and some good luck.

Sloven is just one of thousands of entrepreneurs who have been forced by the trade war to upend their business operations in China in the biggest supply chain shift in a generation.

Companies like Capstone contribute over $200 billion in U.S. purchases of China-made electronics and machinery annually.

When Washington imposed the first tariffs in July 2018, Capstone’s core products, such as battery-powered LED bulbs and motion-activated lighting, were not on the list.

Nor were some Capstone prototypes that Sloven sees as the future of the company: “smart furniture” like a mirror that doubles as a touchscreen with internet access.

But his instinct was that U.S.-China ties were taking a turn for the worse.

“You don’t know what’s coming next in China,” he said.

He set his sights on Thailand as the site of a possible second production base. Sourcing raw materials locally was difficult, but at least they carried no import duties. Setting up a business entity in Thailand was also cheap and fast, and some of the work could be subcontracted.

A U.S. trade official in Thailand introduced him to various local companies who could help.

“I will be able to make products in Thailand,” Sloven said at the end of last summer. But, he added, “it’s not going to be easy.”

In September, U.S. President Donald Trump gave him an even better reason to move.

The total value of U.S. tariffs on Chinese goods was expanded from $50 billion to $250 billion, putting Capstone’s LED products in the crosshairs of 10% levies.

Smart furniture, if made in China, would take a hit.

Soon after, a survey by Amcham China, which represents U.S. businesses, showed that a third of its members were planning to shift the sourcing of components or assemble some goods outside of China.

Sloven’s efforts in Thailand appeared to have paid off. After numerous meetings, he found a furniture factory and an assembler outside Bangkok that could help him.

Both had international experience and were expanding to meet increasing demand from U.S. firms. And while smart furniture was new to them, they were confident they could pull it off and were ready to invest. The companies cannot be named because of non-disclosure agreements.

After a site visit in February, Sloven ordered components for his smart mirror to be shipped to Thailand. By mid-March, Capstone engineers were showing the factory how to put them together.

“I’m not concerned,” Sloven said in February. “I’m giving him the information step by step,” he said, referring to his Thai partner.

Even as Sloven grew more optimistic, the urgency to leave China seemed to abate as 2019 began.

Trump and President Xi Jinping of China had declared a cautious truce at a Group of 20 summit in Buenos Aires, and it seemed to be holding. Officials on both sides were suggesting a deal before a March deadline, and the threat of tariffs rising to 25% seemed distant.

But Sloven was sticking to his plan.

“I don’t think there’s going to be a trade war, but that doesn’t change things,” he said at the time.

He scheduled a series of pilot runs to test how well the Thai factory handled assembly. He also needed to prepare for audits of labor rights and environmental standards that U.S. retailers require.

He estimated that would take at least another six months.

“I’m going to start moving on a small scale because they’re not going to be able to just do it immediately,” Sloven said. “As much as they say, ‘Oh, I can do this right now’ – I’m not taking that chance.”

More investment in tooling and moulds was required, too, but the Thai companies agreed to bear the cost.

Regardless of what happened with the trade war, Sloven felt covered.

“You prepare for war,” he said. “You’re ready if you’re attacked.”

Sloven also had work to do in China.

His suppliers in Shenzhen, Dongguan and Guangzhou were certain the trade conflict would blow over and were reluctant to negotiate deals that would send components and raw materials abroad for assembly.

But Sloven kept pressing ahead with the Thailand plan, concerned about the toll the trade war was taking in China.

Peng described how Chinese factory floors were emptying out as workers were laid off. Few owners had the expertise or resources to automate or find new export markets, so most were riding it out, hoping for a trade deal. They were “losing money every day,” she said.

“They believe that eventually it will all come back,” Sloven said.

“I think within five years, it will all be gone,” Peng replied.

The same day Sloven met his lawyer, his bosses in Florida announced 2018 results that reflected the effects of the trade war. Net revenues came in at $12.8 million, down from $36.8 million in 2017. Net losses were $1 million, a swing from a $3.1 million profit.

“Capstone faced challenges in 2018 unlike any in its history,” chief financial officer Gerry McClinton said.

Meanwhile, development of the smart mirror was in full swing. The prototype was deemed a success at a Las Vegas electronics show in January, and a PR agency and a marketing company were hired to advertise the new product.

For Sloven – and many others – the urgency level bounced back up. That month, a survey by AmCham China and AmCham Shanghai showed the number of firms that had moved production or were considering doing so leaped above 40%.

To speed things up, Sloven introduced the Thai assemblers to his Chinese suppliers.

He wanted to set the rules of the game and then let them interact independently. Those meetings had to go well, or all could fall apart.

In a stroke of luck, he discovered the two sides had something in common.

“The Thai guy, his family was from China originally so he spoke a certain dialect. And the factory in China – my supplier – and him speak the same dialect,” Sloven said. “What a home run!”

After months of digging in its heels, the Chinese company finally relented and agreed to supply Sloven in Thailand.

With his supply of components and raw materials secured, the next big step was the audits.

Thirty-five percent of the product had to be made in Thailand for the product to be considered Thai, and thus exempt from American tariffs.

A certificate from an independent auditor would prove that, but the auditing usually takes four to five weeks.

“I know what I have to do, but getting the information is mind-boggling. These are supply chain issues that everyone in the world is going to have to face,” Sloven said.

Logistics was another concern for Sloven. Shipping to the United States from Thailand takes 8-10 days longer than it does from China.

Despite the extra costs and time, Sloven thinks he will be able to make the product for the same price as in China without the tariffs.

And by the middle of the summer of 2019, Sloven was confident that most of his challenges had been overcome and that the smart mirror would ship on schedule on October 1.

But, he allowed, “there’s always going to be hiccups”.