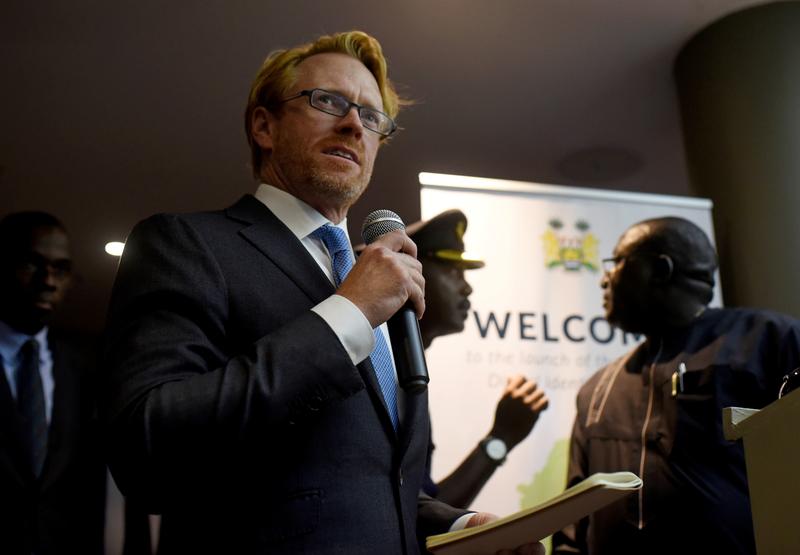 (Reuters) – Kiva, a San Francisco-based tech charity, is using blockchain to create an online ID database in Sierra Leone allowing people who struggle to get loans to prove their credit history.

Schan Duff, Vice President of Strategy for Kiva, a San Francisco-based tech charity that is using blockchain to create an online ID database in Sierra Leone allowing people who struggle to get loans to prove their credit history, speaks during the launching of the system in Freetown, Sierra Leone August 21, 2019. REUTERS/Copper Inveen

Kiva and President Julius Maada Bio officially launched the system in the capital Freetown on Wednesday. Bio hopes it will bring more Sierra Leoneans into the financial system.

Kiva facilitates small loans in 80 countries, but Sierra Leone is the first country to implement an online credit system designed by the organization.

“This visionary step here today guarantees that Sierra Leoneans are not excluded from … the global digital economy,” Bio said at the launch.

More than three quarters of Sierra Leone’s population lies outside the formal banking sector, according to data from the central bank. Informal institutions like community banks and microfinance lenders are more common, but they rarely share credit information and often charge extortionate interest rates.

The platform will enable lenders to look up citizens’ credit histories using fingerprints and other biometric data that was collected a few years ago by Sierra Leone’s government to print voter ID cards.

Ordinary Sierra Leoneans appear excited by the prospect, including Safiatu Mariama Bangura who with her mother runs a rice restaurant out of an aluminum shack with tarpaulin walls in the capital Freetown.

“It’s very difficult to do business because we don’t have a bank account or any way of getting loans,” Bangura said. “[The program] would help us, because my mother doesn’t know how to even sign her name – she only knows how to use her fingerprint.”

Each prospective borrower will be assigned a digital wallet, with transactions recorded in blockchain to keep user information secure and prevent tampering with the leger.

“A national identity program here would provide the foundation for the growth of a robust financial services ecosystem,” said Schan Duff, Kiva’s Vice President of Strategy.

Borrowers will access the wallet through an app. That presents a problem for many in Sierra Leone, where the Information Ministry says less than 15 percent have access to the internet.

Duff said its partners in the field, including banks, overcome this by using mi-fi devices that can connect to the internet via phone networks.

Sierra Leone’s government aims to have the system in use by all banks and microfinance institutions in the country by the end of this year, Bio said.

“Lack of identification, or an inability to verify that identification for credit purposes, increases the cost of business for everyone,” David Senghe, who heads Sierra Leone’s Directorate of Science Technology and Innovation, told Reuters over the phone.

“A national platform … means that companies, institutions, and whoever can verify that what I’m saying about my loan history is (true). Anyone can fake a drivers license, but not a system like this.”