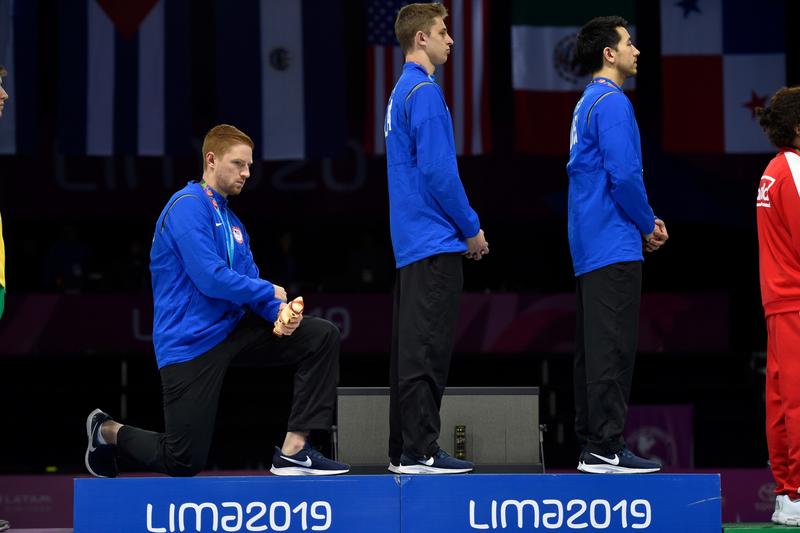 (Reuters) – U.S. athletes Race Imboden and Gwen Berry have been placed on probation for 12 months for their political protests at the Pan Am Games, USA Today reported on Tuesday.

The probation means both athletes will still be eligible to compete at next year’s Tokyo Olympics.

Sarah Hirshland, CEO of the U.S. Olympic and Paralympic Committee, wrote to both athletes informing them of the decision and said future protests would be met with stiffer punishments. The letters were obtained by USA Today Sports.

The Committee was not immediately available for comment when contacted by Reuters.

Hirshland said the two athletes were considered to be in a “a probationary period for the next 12 months.”

“This means you could face more serious sanctions for any additional breach of our code of conduct than might otherwise be levied for an athlete in good standing,” she wrote.

After his protest in Peru, Imboden took to Twitter to explain his actions and to “call for change”.

“This week I am honored to represent Team USA at the Pan Am Games, taking home gold and bronze,” he wrote.

“My pride however has been cut short by the multiple shortcomings of the country I hold so dear to my heart. Racism, gun control, mistreatment of immigrants, and a president who spreads hate are at the top of a long list.

“I chose to sacrifice my moment today at the top of the podium to call attention to issues that I believe need to be addressed. I encourage others to please use your platforms for empowerment and change.”

Athletes taking a knee has become a way of protesting injustice in the United States.

The protest was first started in 2016 by former San Francisco 49ers quarterback Colin Kaepernick to draw attention to social injustice and police brutality.

Berry’s raised fist recalled memories of what was perhaps the Olympics’ most famous protest when sprinters Tommie Smith and John Carlos raised their clenched fists during the 200 meters medal ceremony at the 1968 Mexico Summer Games.