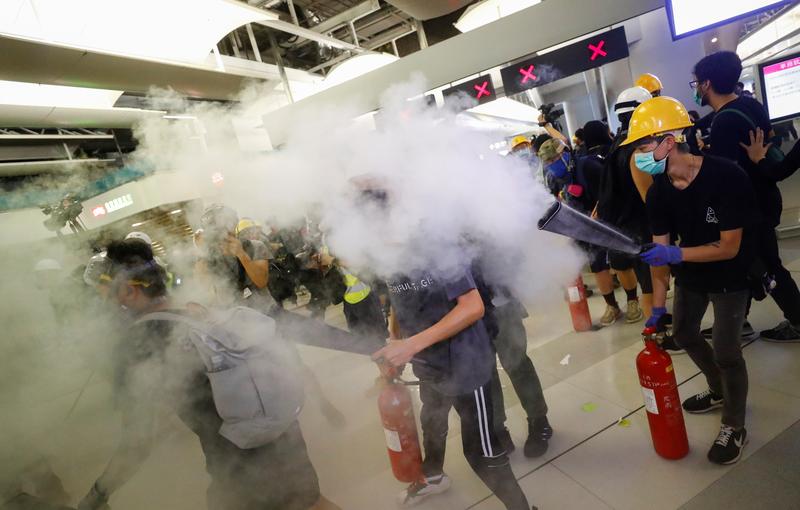 HONG KONG (Reuters) – Thousands of Hong Kong protesters held an anti-government sit-in on Wednesday at a subway station that was attacked by a mob last month, angry that nobody had yet been prosecuted for the violence.

Protesters fire nitrogen extinguishers toward riot police during a stand off at Yuen Long MTR station, the scene of an attack by suspected triad gang members a month ago, in Yuen Long, New Territories, Hong Kong, China August 21, 2019. REUTERS/Kai Pfaffenbach

Many wore masks, some with helmets, as they gathered at the suburban Yuen Long MTR rail station. Police clashed with some protesters who sprayed fire hoses from the subway station. Others smeared the station floor with cooking oil to try to stop the police advancing.

It was the latest in a series of demonstrations since June against a perceived erosion of freedoms in the Chinese-ruled former British colony. The protests have sometimes turned violent, including the storming of the legislature and havoc at the airport.

Wednesday’s demonstration was to mark the night of July 21, when more than 100 white-shirted men stormed the Yuen Long station hours after protesters had marched through central Hong Kong and defaced China’s Liaison Office – the main symbol of Beijing’s authority.

Democratic Party legislator Lam Cheuk-ting, who was wounded in the July attack by suspected triad gangsters, said he believed the protesters wanted a peaceful night on Wednesday but he could not rule out further violence – from gangsters or the police.

A protester in a black t-shirt and mask held up a sign saying that one month since the attack, no one had been brought to account.

“I’m most angry at how the police are biased in their prosecutions,” said the protester, who gave his name as Sean and said he was 25.

Squads of police were stationed on the station perimeter and some protesters jeered and shone lasers at them, calling them “black police”.

A small crowd of masked young men gathered on a station balcony, swearing and cursing at police vans down a side street.

The unrest has been fueled by broader worries about the erosion of freedoms guaranteed under the “one country, two systems” formula adopted after Hong Kong’s return to China in 1997, including an independent judiciary and the right to protest.