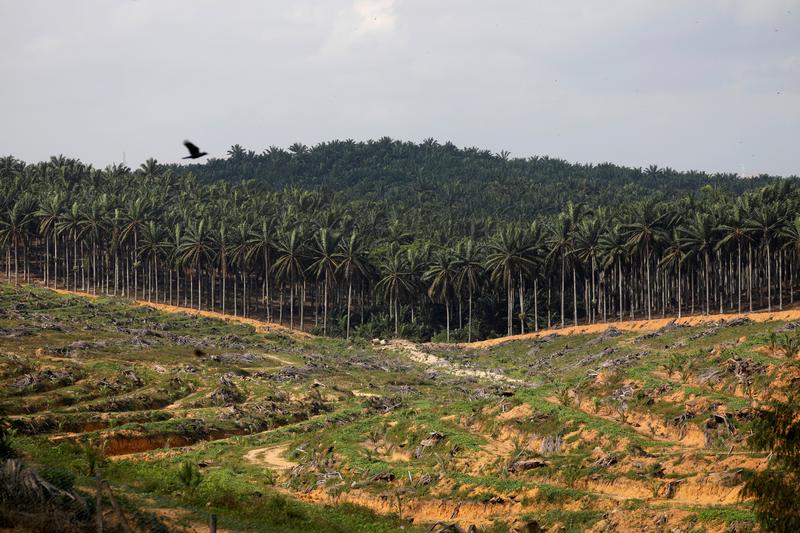 KUALA LUMPUR (Reuters) – On the morning of Feb. 26, executives from a Washington consultancy presented a strategy paper to some of the most powerful officials in the Malaysian palm oil industry.

FILE PHOTO: Land that has been cleared is pictured at an oil palm plantation in Johor, Malaysia February 26, 2019. REUTERS/Edgar Su/File Photo

The message: Don’t allow environmental activists and Western governments to tarnish palm oil to the extent that it ends up a pariah product, like tobacco.

The $60 billion palm oil trade has been vilified by environmentalists because of the vast areas of tropical rainforest they say have been cleared to grow the commodity that is consumed by billions of people.

Malaysia and Indonesia, which together produce about 85% of the world’s palm, had been largely passive in response, comfortable in relying on the sustainability of demand for an oil used for cooking and in items like soaps and shampoos, snack foods, pizza, bread and biodiesel. Food accounts for nearly 70% of global consumption of palm oil.

But last year, Malaysia launched a global public relations and lobbying offensive to protect the reputation of its key export, particularly in Europe. Reuters has pieced together a picture of the sweeping effort from internal public relations strategy documents as well as interviews with dozens of palm oil industry participants.

The European Union passed an act earlier this year to phase out palm oil from renewable fuel by 2030 due to deforestation concerns. While demand for palm oil used in EU biodiesel accounts for a fraction of global supply, palm oil producers in Malaysia and Indonesia worry the law could spur calls for regulation in its usage in food.

Malaysia has led the PR offensive since the EU began working on the law, as it is far more reliant on exports than larger rival Indonesia, and ships about 85% of its total palm oil production overseas annually.

Malaysian Prime Minister Mahathir Mohamad has said the EU law was “grossly unfair” and was an attempt to protect alternative oils that Europe produced itself.

The publicity campaign aimed at critics of palm oil has been coordinated by the Malaysian Palm Oil Council (MPOC), a state agency responsible for promoting palm oil and looking for trade opportunities for the product.

The agency is funded at least partly by a fee paid by plantation companies based on palm oil production. MPOC’s board includes representatives from plantation companies, including Sime Darby Plantation Bhd (SIPL.KL), the world’s biggest oil palm planter by land, and IOI Corp (IOIB.KL).

The representatives of the two companies did not respond to requests for comment.

Its campaign is centered around small holder farmers, carried out by platforms that say they represent farmers but are created or run by PR firms hired by the MPOC, the strategy documents dated Aug 6, 2018 and Feb 26, 2019, show.

MPOC has also approved funding news sites, researchers, op-eds and former politicians to speak up for palm oil and undermine the EU law, the documents show.

None of the groups or individuals identified in the proposals have been transparent about their funding and have often claimed to be independent voices.

At least three PR firms hired by the MPOC are running these campaigns, copies of their proposals seen by Reuters show. The MPOC approved all their proposals, according to two sources with direct knowledge of the matter.

The main company involved in the strategy is the DCI Group, a Washington-based public relations firm that has previously developed campaigns for tobacco and oil multinationals. Its clients have included Altria (MO.N) and the former Burmese military junta, according to U.S. public records and DCI itself.

Asked by Reuters for comment on its strategy, DCI said it was engaged in the Malaysian campaign but did not give details.

“We are proud to work with Malaysia’s palm oil industry in its fight to defend the jobs and livelihoods of small farmers against unfair trade and environmental policies which perpetuate global poverty,” said Justin Peterson, managing partner at DCI Group, in an e-mail.

The MPOC has not spoken publicly about the campaign. It told Reuters that it uses various methods, including engagement of PR agencies and advisory firms, to pursue its objectives, but for competitive and client confidentiality reasons, it would not disclose details.

“Industries and governments across the world engage in an array of efforts to defend their national interests. In MPOC’s case, however, we ensure that all such activities are above board and are in accord with local rules and regulations governing such engagements,” the MPOC said.

The Malaysian ministry in charge of palm oil declined comment.

The other two firms running PR campaigns are: Kuala Lumpur-based Invoke, run by Rafizi Ramli, a former Malaysian lawmaker; and Unitas Communications, a PR firm with offices in London and Jeddah.

Invoke runs its campaign through the ‘Planters United’ platform, which describes itself as a non-governmental organization made up of smallholder farmers, according to a Feb. 26 copy of its proposal seen by Reuters.

Unitas, Rafizi and Invoke did not respond to calls and emails for comment.

EU lawmakers declined to talk about lobbying by the palm oil industry but environmental group Greenpeace said the lobbying by Malaysia had resulted in the EU law relating to biodiesel being diluted.

Officials at the European parliament were not available for comment and Reuters was unable to independently confirm this.

According to documents reviewed by Reuters, DCI’s campaign pitch to the MPOC this year sought a budget of over $1 million. The MPOC approved the budget after negotiating the price slightly down, the two sources said.

MPOC and the three PR companies did not comment on the amounts and whether it was approved.

Reuters has seen a copy of an eight-page public affairs proposal distributed by DCI at the February 26 meeting with at least a dozen officials from MPOC, the Malaysian ministry of primary industries and palm oil companies. The proposal said: “The eco-colonialists have turned to a scorched earth approach of junk science and faulty logic: they label palm oil as the new tobacco.”

“Attempting to reason with these opponents, through dialogue or scientific research will not stop their attacks and will not advance Malaysia’s position.”

The document did not name the “eco-colonialists” but in previous paragraphs it refers to the EU.

Farmers should be the “primary messengers” globally of the campaign against critics of palm oil, DCI said in a previous proposal to MPOC, in August, 2018.

“Small farmers are Malaysia’s most powerful weapon against Europe and the NGOs,” it said.

DCI has been running or coordinating grassroots campaigns through front groups such as Farmers Unite, DCI’s campaign proposals from August 2018 and February 2019 show.

Farmers Unite says on its website it is a global coalition of oil palm small farmer associations and other supporting organizations, and that it speaks for more than 7 million oil palm smallholders across the world.

Farmers Unite took out full page advertisements last December in the UK against British retailer Iceland when the company said it would stop selling in-house products containing palm oil. Iceland says it has ended the use of palm oil in such products by the end of 2018.

Iceland declined to comment on the Farmers Unite campaign.

In August 2018, DCI pitched to the MPOC the creation of an African platform with the help of Nigerian think tank, the Initiative for Public Policy Analysis (IPPA), saying “recruiting support from African allies is necessary to put maximum pressure on your opponents.”

“These are weak spots for EU NGOs and politicians – they fear accusations of neo-colonialism and discrimination,” the proposal said.

In its next presentation in February, 2019, DCI asked for a budget of $10,000 per month for Farmers Unite, which it described as a project of IPPA. IPPA has previously opposed tougher legislation against tobacco products in Nigeria, citing the negative impact on farmers and investment.

IPPA said “where we raise our money and get support is immaterial.”

In its August 2018 proposal, DCI also set out a strategy to use a group called Faces of Palm Oil, which says it represents 650,000 farmers in Malaysia, in the campaign.

“Faces of Palm Oil will once again serve as the campaign hub; and small farmers should be the primary messengers in Malaysia, European and international media,” DCI said in the proposal.

Faces of Palm Oil has been the most vocal farmers’ group on social media, criticizing NGOs, EU lawmakers and journalists, based on its social media feed and environmental groups tracking palm oil. It says on its website it is a joint project of three major farmers’ groups and other bodies.

Faces of Palm Oil did not respond to a request for comment.

MPOC did not comment on the funding of the farmers’ groups.

DCI has also sought to influence opinion through paying for news articles, columns and research, according to the documents seen by Reuters.

This year, for example, DCI asked the MPOC to provide a budget of $11,000 a month to a newsletter called Palm Oil Monitor, according to the February proposal. The newsletter has been publishing news stories and behind-the-scenes information on the negotiations of the EU law, scooping mainstream media on the contents of Mahathir’s strongly-worded letters to European leaders. The plan was accepted, the two sources said.

Khalil Hegarty, one of the two authors of Palm Oil Monitor, told Reuters in an emailed statement that the newsletter “benefited from support from various sources (including industry sources).” He declined to provide specifics.

Hegarty said “we don’t lobby, and any insinuation that Palm Oil Monitor is a part of some grand lobbying effort would be inaccurate.”

Reporting by A. Ananthalakshmi and Emily Chow; Additional reporting by Clare Roth, Foo Yun Chee and Philip Blenkinsop in BRUSSELS; Gwladys Fouché and Victoria Klesty in OSLO and Alexis Akwagyiram in LAGOS; Editing by Joe Brock and Raju Gopalakrishnan