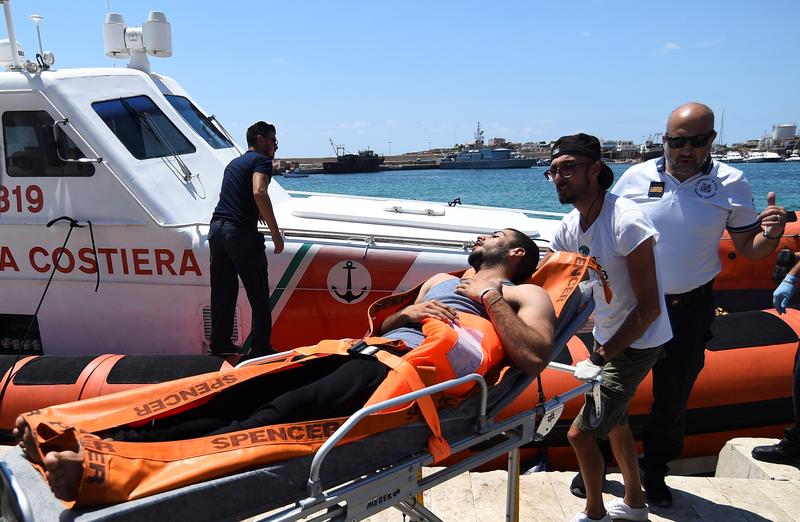 LAMPEDUSA/MADRID (Reuters) – Spain ordered a naval vessel on Tuesday to the Italian island of Lampedusa to bring migrants stranded there on a rescue boat to Mallorca after some of them jumped overboard, amid a prolonged stand-off with Italy’s government over their fate.

A migrant who jumped off the Spanish rescue ship Open Arms is carried on a stretcher, in Lampedusa, Italy August 20, 2019. REUTERS/Guglielmo Mangiapane

The Open Arms rescue ship is run by a Spanish charity of the same name and has been at sea for 19 days with almost 100 migrants onboard. It has been waiting just off the port of Lampedusa, asking to bring the mostly African migrants ashore despite an Italian ban on private rescue ships docking.

The navy ship Audaz “will depart this afternoon at 5 p.m. and will sail for three days to Lampedusa, where it will take charge of the people hosted by the Open Arms and escort the boat” to the Spanish port of Palma in Mallorca, the Socialist government said in a statement.

“The government … considers this to be the most adequate solution that will allow a resolution of the humanitarian emergency taking place aboard the Open Arms this week,” it said.

The plan is to transfer most of the migrants to the Audaz and escort the Open Arms with the remaining migrants, a government official clarified later.

The Open Arms said it had not yet been informed of the Spanish decision.

It earlier tweeted that “the situation is out of control” aboard the ship and that nine people had thrown themselves into the water. It says the situation on board is desperate and some migrants are suicidal. The passengers are sleeping jammed together on deck and sharing two toilets.

After the charity said nine had tried to swim ashore, Reuters footage showed another five people jump, although it was not immediately clear if some were lifeguards.

Italian coastguards went to the rescue of those who jumped, Reuters reporters saw. Reuters footage showed a few people being brought to the Open Arms on a small dinghy but it was not clear if they were among the rescued migrants.

Italy has taken a tough line on migrant entry, saying it has borne too much responsibility for handling African migration to Europe. Interior Minister Matteo Salvini says the charity-run ships have become “taxis” for people smugglers.

“NO LONGER THE REFUGEE CAMP OF EUROPE”

Dozens of migrants have been taken ashore since the ship entered Italian waters because they were said to be minors or ill.

Salvini suggested on Tuesday that the charity was exaggerating the problems on board. Of eight migrants taken ashore on Monday night for urgent medical attention, he said, only two had health problems.

“Spanish NGO, Spanish ship, Spanish port: The coherence and strength of Italy has paid off. We are no longer the refugee camp of Europe,” he said in a statement.

The standoff has fueled Salvini’s campaign against migrant boats from Africa, and comes as he is trying to force Italy into snap elections. Italy’s Prime Minister Giuseppe Conte announced his resignation on Tuesday accusing Salvini of sinking the ruling coalition for personal and political gain.

Toninelli, who controls the Coast Guard but not port access, had earlier offered to take the migrants on a Coast Guard vessel to Spain under the condition that Madrid de-register the Open Arms ship by removing its Spanish flag.

“I hope that Spain answers our appeal and commits to stopping Open Arms in the future with the means and in the ways it deems right,” the Italian minister said in a statement.

Without a flag, it would be difficult for the ship to continue running rescue missions.

Spain and five other European Union nations have offered to take the migrants. The details of the offers from Spain, France, Germany, Romania, Portugal and Luxembourg have yet to be finalised.