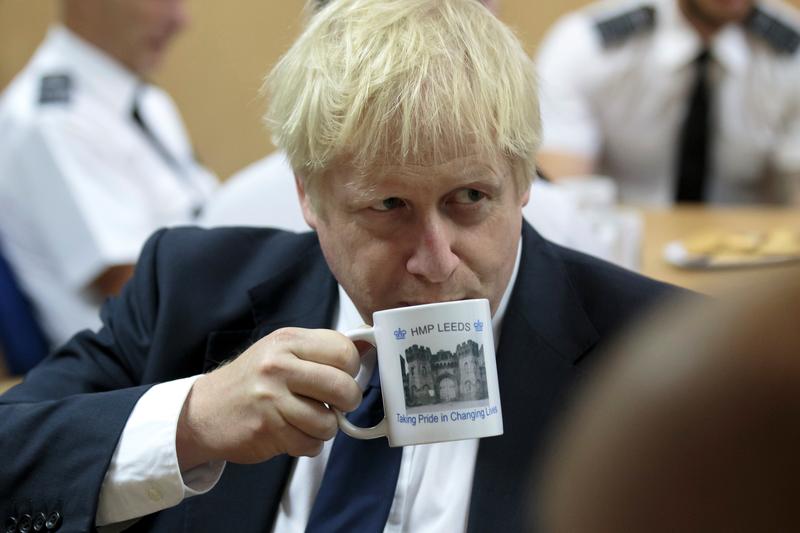 FILE PHOTO: Britain’s Prime Minister Boris Johnson takes a drink from a prison mug as he talks with prison staff during a visit to HM Prison Leeds, in Leeds, Britain August 13, 2019. Jon Super/Pool via REUTERS/File Photo

LONDON (Reuters) – The European Union is being “a big negative” about the prospects of reaching a Brexit deal but it can be done, British Prime Minister Boris Johnson said on Tuesday.

The bloc earlier rebuffed Johnson’s demand that it reopen the Brexit divorce deal, saying Britain had failed to propose any realistic alternative to the backstop, an agreed insurance policy for the Irish border.

“At the moment it is absolutely true that our friends and partners are a bit negative … but I think we’ll get there. I think there is a real sense now that something needs to be done with this backstop,” Johnson told reporters.

“We think there’s a big opportunity now for everybody to come together, take out that backstop and then … in the course of the negotiations on the free trade deal … which we’re going to do after Oct. 31, we will be bringing forward all the ways in which we can maintain frictionless trade at the Northern Irish border.”

These could include trusted-trader schemes and electronic pre-clearing to take checks away from the border, he said.

Johnson has promised to take Britain out of the EU on Oct. 31 with or without an exit deal, likely setting himself up for a battle with parliament which has vowed to try and block a no-deal exit.

He said the fact the EU still believed parliament could succeed in doing this was hindering the prospects of renegotiating the exit deal it reached with his predecessor, Theresa May.

“While they think there is a possibility that parliament will block Brexit they are unlikely to be minded to make the concessions that we need, so it is going to take a bit of patience,” Johnson said.