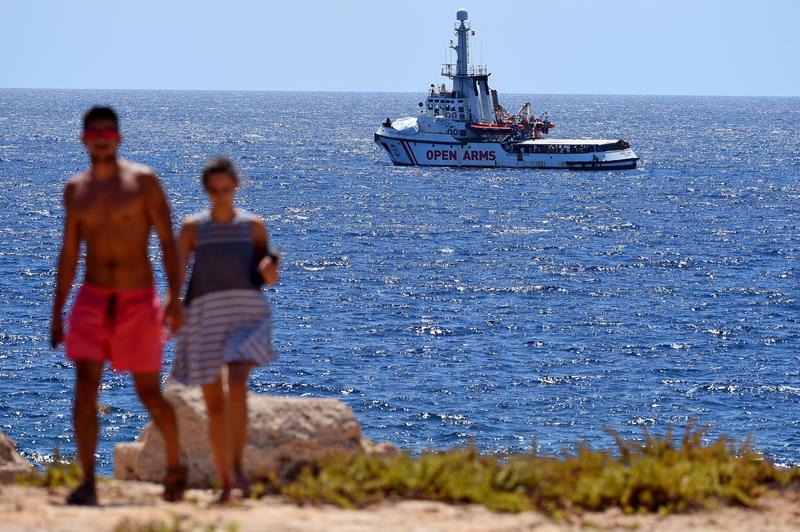 MADRID/LAMPEDUSA (Reuters) – The commanders of a rescue ship with 98 migrants aboard declined to leave Italian waters on Monday, turning down an option to take them to Spain and suggesting that Italy’s Coast Guard should take them there instead.

The Open Arms ship, run by a Spanish charity of the same name, has been stranded at sea for 18 days, with the charity saying that the migrants are distressed and in no condition to sail to Spain in such cramped conditions on board.

Late on Monday eight migrants that needed urgent assistance and another one accompanying them were evacuated to the Italian port of Lampedusa after being authorized to do so, an Open Arms spokeswoman said.

“We have exhausted physically, morally and technically the few resources that this organization has in this moment,” Open Arms’ director and founder, Oscar Camps, told Reuters on Monday.

Camps said the Italian Coast Guard had offered to provide an escort and to carry some of the migrants to end the standoff, which he says is at crisis point. Migrants sleep jammed together on the deck, with two toilets for about 100 people. Some are suicidal and close to mental breakdown, Open Arms said.

Camps said Open Arms wanted the Coast Guard to take all the migrants to Spain.

“(I say) that they not only carry a part but carry them all and that they carry them in a safe and dignified way,” he said.

An Italian Coast Guard spokesperson could not be immediately reached for comment.

If a solution is not found, Open Arms has not ruled out the option of defying Italy’s ban and attempting to dock. The ship has been sitting for days off Lampedusa, watched by an Italian patrol boat stationed nearby.

Asked if the ship would try and enter the port without permission, Open Arms’ head of mission in Lampedusa, Riccardo Gatti, replied: “Yes it is an option”.

The standoff has fueled Salvini’s campaign against migrant boats from Africa at a time when he is striving to drag Italy to snap elections. The ruling coalition, in danger of collapse this week, has split over the issue.

Salvini allowed 27 minors to leave the boat on Saturday, saying he was only doing so on the prime minister’s instructions, and has cast doubt on Open Arms’ statement that the migrants’ physical and mental wellbeing is at crisis point.

Spain’s left-wing government offered on Monday to allow the ship to land in a Spanish port, and it and five other European Union nations have offered to take the migrants.

The details of the offers from France, Germany, Romania, Portugal, Spain and Luxembourg have yet to be finalised. The European Commission said it was trying to “facilitate a solution which would allow the people on board the boat to disembark”.

If the Open Arms attempts to dock in Lampedusa, it could face resistance from a coastguard vessel stationed near the mouth of the port – a scene that played out in June when the captain of another charity ship defied Salvini’s ban.

Carola Rackete, captain of a ship run by German charity Sea-Watch, took her ship into Lampedusa, squeezing a patrol boat against the quay as she docked. She was arrested but later freed from house arrest, and she still faces possible charges of aiding illegal immigration and defying official orders.

Under new laws introduced by Salvini, ships that enter Italian waters without authorization face a fine of up to 1 million euros ($1.11 million). The ships can also be seized.

Spain’s acting defense minister, Margarita Robles, said Salvini was putting human lives at risk for “absolutely electoral reasons”, adding: “What Salvini is doing regarding the Open Arms is a shame for all humanity.”