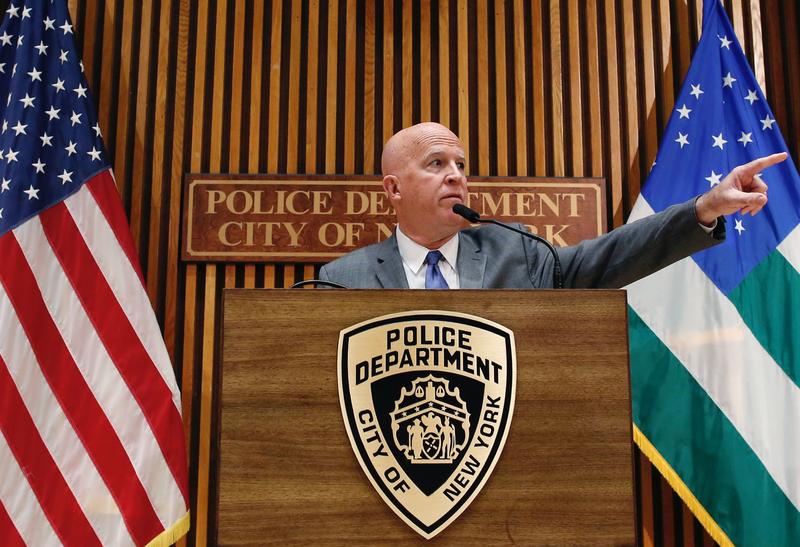 NEW YORK (Reuters) – The New York Police Department on Monday fired the white officer who used a deadly chokehold on Eric Garner while trying to arrest him in 2014, an incident that helped fuel the “Black Lives Matter” movement in response to police use of force.

The case, made famous by Garner’s plaintive cries of “I can’t breathe” with officer Daniel Pantaleo’s arm wrapped around his neck, tore at the NYPD for five long years while the United States dealt with a series of other cases of black officers killing unarmed African-American men.

A local grand jury declined to indict Pantaleo and the U.S. Justice Department opted not to prosecute, but Pantaleo was suspended earlier this month when a departmental judge ruled that the officer should be fired. He had been on desk duty since the incident on July 17, 2014.

Commissioner James O’Neill, in announcing the firing, said he had been thinking about the case ever since he assumed the top job in 2016, weighing how Garner resisted arrest and, in his view, Pantaleo acted properly up until the moment he applied the chokehold after the two men fell to the ground.

“Every time I watched the video, I say to myself, as probably all of you do, to Mr. Garner: ‘Don’t do it. Comply.’ To Officer Pantaleo: ‘Don’t do it,’” O’Neill said.

O’Neill repeatedly returned to the empathy he had for Pantaleo, having himself been a uniformed officer for 34 years. “That could possibly be me… I may have made similar mistakes,” O’Neill said.

He also said he understood some police officers would be angry with him for not supporting one of their own. Police went into the neighborhood to enforce a series of petty crimes that reduced the quality of life in the neighborhood, O’Neill said.

But in the end, O’Neill said, he could not overlook that Pantaleo applied the chokehold despite having received sufficient police training that such a hold was barred, resulting in what he called “an irreversible tragedy.”

The head of the police union immediately condemned the decision, saying the commissioner gave in to political pressure and that his decision would put officers at greater risk.

“Police Commissioner O’Neill has made his choice: he has chosen politics and his own self-interest over the police officers he claims to lead,” said Patrick Lynch, president of the Police Benevolent Association. “He has chosen to cringe in fear of the anti-police extremists, rather than standing up for New Yorkers who want a functioning police department.”

Garner’s death, and the slow-moving investigations that followed, have generated some of the harshest criticisms of Mayor Bill de Blasio during his tenure and have spilled over into his campaign for the Democratic presidential nomination.

The case tested the liberal mayor’s relationships with both civil rights activists, who have long complained that the city’s black and Latino residents are harassed by police, and the rank-and-file police officers who work for him, some of whom say they have been made scapegoats by his office.

The chairman of the city’s Civilian Complaint Review Board said “this process took entirely too long” and lamented that the tragic events cannot be reversed.

“But it is heartening to know that some element of justice has been served,” Chairman Fred Davie said in a statement.

In 2015, New York City paid a $5.9 million settlement to Garner’s family to avoid a civil lawsuit.