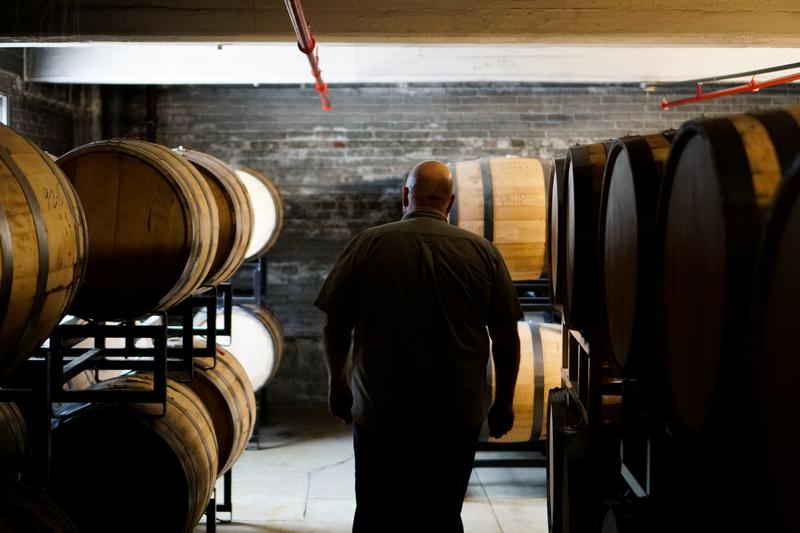 Foreign governments subject to U.S. President Donald Trump’s trade tariffs have targeted American distilleries and their bourbon and rye whiskeys for retaliation. The industry fears new tariffs under consideration by the U.S. government could result in even higher tariffs on their products in Europe.

“We went from a marginally profitable business to breaking even,” Mountain Laurel’s owner and chemical engineer-turned-distiller, Herman Mihalich, said while testing his latest batch of rye whiskey in the sleepy hamlet of Bristol in southeast Pennsylvania.

U.S. whiskey exporters are struggling to recoup lost sales after shipments to Europe plummeted 21% between June 2018 and 2019, according to data from the Distilled Spirits Council, a U.S. industry group.

In the 12 months before the tariffs hit, the United States exported $757 million of rye and bourbon. From July 2018 to June 2019 exports were $597 million. Exports are a sizeable chunk of sales the U.S. whiskey industry, which generated $3.6 billion in revenue in 2018.

The U.S. Trade Representative’s office is preparing to slap tariffs of up to 100% on $1.8 billion worth of European spirits and wine in response to illegal European aid to planemaker Airbus (AIR.PA), the most recent development in a 15-year-long trade dispute between Europe and the United States.

“American whiskeys have become collateral damage,” said Chris Swonger, chief executive of the Distilled Spirits Council at an Aug. 6 hearing with the U.S. Trade Representative. He urged Washington not to introduce the new tariffs because the industry fears Europe will introduce even more tariffs in retaliation.

The group said that at least 11,200 to 78,600 jobs could be lost in the beverage, alcohol and hospitality sectors, which currently employ 2.4 million Americans, if the EU-U.S.-conflict worsened.

The tariff war is capping a boom for U.S whiskey despite a surge in global demand for traditionally made spirits and cocktails. The Kentucky Distillers Association said that the production of Kentucky bourbon, a popular variety of U.S. whiskey, in 2018 reached its highest level – 1.7 million barrels – since 1972.

At the Aug. 6 hearing, Swonger testified that many of the Distilled Spirits Council’s members, including exporting businesses from 45 U.S. states, have halted hiring and expansion plans and seen margins take a hit because of the tariffs.

One of them is Scott Harris of Catoctin Creek Distilling Co in Virginia, who has thousands of unfilled rye bottles. Anticipated European demand never materialized because of the EU levies, which have pushed prices too high for most European consumers.

The company had hoped that Europe could soak up at least a tenth of its sales and had bought a large inventory of European-sized bottles just as the tariffs hit.

Worse, Harris said he cannot do anything with the 700 ml bottles because the U.S. market mandatory standard is 750 ml bottles.

Catoctin Creek’s European sales are today close to zero, and the few bottles it does sell are at a significant loss because the firm does not want to pass on the cost of tariffs to price-sensitive European customers.

“We had one distributor we signed a deal with. He just stopped returning our phone calls,” Harris said. “We’ve been trying very hard to get into the UK and France, and we can’t get any distributor to talk to us right now.”

Several distillers interviewed by Reuters said that prior to the tariffs, Scottish or Irish whiskeys were generally more expensive in Europe, fuelling thirst for cheaper U.S. varieties. But when the duties reversed the cost picture, European distributors lost interest in American rye and bourbon.

“The way the market is now is extremely disappointing,” Peay said.

In Pennsylvania, Mountain Laurel Spirits has tried to offset sales declines by breaking into new markets in the United States, a far from easy task as each of the 50 U.S. states requires an in-state licensed wholesaler.

While there are exceptions and there are wholesalers that operate in several states, Mihalich complained that the contracts often have to be drawn up 50 different ways.

Other foreign markets outside of Europe are often hard to break into and often not worth the hefty investment for smaller distillers, several companies said.

Large spirit producers have also been forced to adjust to the tariffs. Brown–Forman Corp (BFb.N), maker of the world’s most popular U.S.-made whiskey, Jack Daniels Tennessee whiskey, has lost $125 million due to the European tariffs.

Chief Executive Lawson Whiting said in June that the company takes the hit “quite personal” since it produces 60% of all U.S. whiskey.

“It is a targeted tariff at Brown-Forman,” Whiting said.