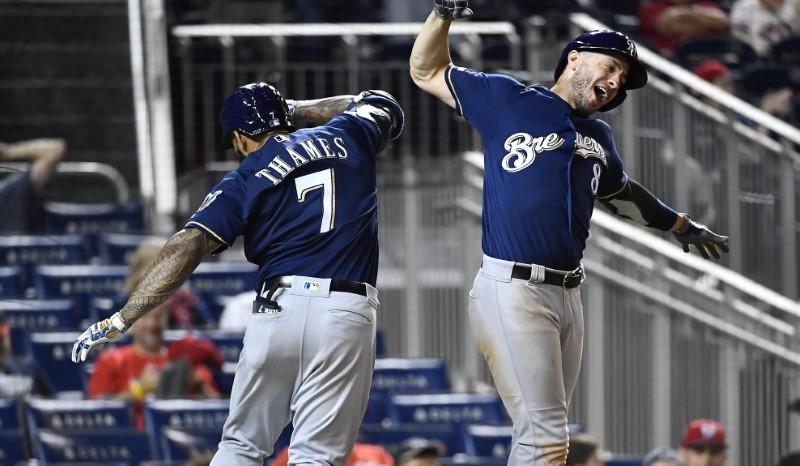 Milwaukee’s Eric Thames roped a two-run homer in the 14th inning and the Brewers scored a wild 15-14 victory over the host Washington Nationals on Saturday night.

Thames’ 17th homer of the season, off Javy Guerra (1-1), was Milwaukee’s seventh long ball in a game that lasted 5 hours, 40 minutes. The seven homers tied a Brewers record for most in a game.

Christian Yelich went 5-for-6 with two homers, four RBIs, three runs and a stolen base; Ryan Braun hit a pair of solo home runs and also stole a base; and Mike Moustakas (3 RBIs) added a solo shot. Both Braun and Moustakas had three hits. Trent Grisham stroked a two-run homer.

Atlanta got back-to-back home runs from Josh Donaldson and Adam Duvall in the sixth inning and hung on to beat visiting Los Angeles.

It was the 14th time the Braves have hit back-to-back homers this season, but the first time it has happened to Los Angeles starter Hyun-Jin Ryu. Donaldson hit his 29th homer with one out in the sixth, and Duvall followed with his sixth — and his first since Aug. 1 — as the Braves took a 4-2 lead.

It was the first time the Braves have beaten the Dodgers in five meetings. The attendance of 43,619 set a SunTrust Park attendance record in its third season.

The second-place Athletics won their fourth straight and made it three in a row over the first-place Astros, winning by more than one run for the first time in the series.

A’s starter Chris Bassitt (9-5) benefited from the big-time offensive support to extend his string of unbeaten starts to four. He allowed three runs and eight hits in six innings, walking two and striking out four.

Lester (10-8) gave up four hits, with three strikeouts and five walks. He and relievers Tyler Chatwood and rookie Rowan Wick — who each allowed no hits — combined for the shutout, with Wick getting the final three outs for his first career save.

Bryant’s homer helped make up for two earlier errors he made at third base that forced Lester to work out of jams.

Torres homered in the fourth off Zach Plesac (6-4) and in the sixth off Nick Wittgren. It was his major league-leading seventh multi-homer game this season and ninth of his career.

Didi Gregorius and DJ LeMahieu also homered for the Yankees, who won for the 15th time in 18 games.

Kyle Seager extended his hit streak to 11 games with a go-ahead home run with two out in the eighth inning as visiting Seattle defeated Toronto.

Austin Nola also homered for the Mariners as the teams split the first two games of the three-game series. Keon Broxton added two sacrifice flies. Bo Bichette and Reese McGuire homered for the Blue Jays, who lost star rookie Vladimir Guerrero Jr. to a knee injury. The severity of the injury is not yet known.

Anthony Bass (2-4), who allowed McGuire’s tying homer in the seventh, pitched one inning for the win. Matt Magill pitched around a double and struck out three in the ninth to earn his first career save.

Pinch-hitter Michael Brosseau hit a two-out single in the bottom of the 13th, snapping a long Tampa Bay scoring drought as the Rays defeated visiting Detroit.

Brosseau’s game-winner knocked in Eric Sogard, who doubled after Matt Hall (0-1) retired the first two batters in the inning. Tampa Bay had gone scoreless in 29 consecutive innings before the breakthrough run.

Rays pitchers struck out 24 batters, a club record. Tampa Bay starter Ryan Yarbrough gave up just three hits and struck out a career-best 10 in 6 1/3 innings. Detroit starter Jordan Zimmermann, activated off the 10-day IL prior to the game, allowed one hit and struck out five in five innings.

Rodriguez (14-5) walked two and struck out four in his longest start of the season as the Red Sox won their fourth straight game. The dominant outing came hours after the team placed ace left-hander Chris Sale on the injured list with left elbow inflammation that could end his season.

The Orioles fell for the 11th time in their last 12 contests.

J.T. Realmuto homered for the Phillies, who had a four-game winning streak snapped.

Lamet (2-2), a right-hander making just his eighth start of the season after a 15-month recovery from Tommy John surgery, allowed three runs on six hits. He walked one and struck out six to improve to 2-0 in three starts this month.

Rookie Aristides Aquino continued his home-run barrage by belting a three-run shot in the fifth inning as host Cincinnati recorded a win over St. Louis.

Rookie Nick Senzel homered to lead off the first inning, and Freddy Galvis had a pair of hits and drove in a run for the Reds, who have won two of three following a four-game losing skid.

Matt Carpenter homered in the second inning for the Cardinals, who followed up Friday’s 13-run, season-high 18-hit performance by falling for just the second time in eight contests.

Belt connected off Taylor Clarke (4-4) as part of a five-run second inning. He also had an RBI single in the third and a run-scoring groundout in the eighth to match his career high with six RBIs.

DeGrom (8-7) gave up two of his three hits to Hunter Dozier, who singled in the fourth and seventh. DeGrom struck out five, walked two and threw 107 pitches.

DeGrom allowed three runs or less for the 16th straight time. Not including openers, that is the longest active streak in the majors. He also moved five ahead of injured Washington ace Max Scherzer for the National League lead with 194 strikeouts.

C.J. Cron homered to highlight a six-run first inning, and Miguel Sano had three hits, including a two-run home run, to lead Minnesota to a win over Texas in Arlington, Texas.

Marwin Gonzalez, Jorge Polanco and Jake Cave also finished with three hits, and Cron and Max Kepler had two hits for the Twins, who finished with 18 hits.

Danny Santana had two homers and four RBIs and Shin-Soo Choo went 3-for-5 with a double and RBI for Texas, which lost for the ninth time in its last 11 games.

Goodwin also drew a bases-loaded walk in the seventh to account for the final run of a four-run uprising that gave the Angels the one-run lead. Los Angeles has won two of the first three contests of the four-game set.

Eloy Jimenez hit a two-run homer, and James McCann had a two-run double for the White Sox.

Trevor Story, Charlie Blackmon and Ian Desmond also homered for the Rockies, who have won three in a row for the first time since June 18-20. German Marquez (12-5) struck out eight over five innings and had a double before leaving due to cramping.

Jon Berti and Garrett Cooper homered for the Marlins.