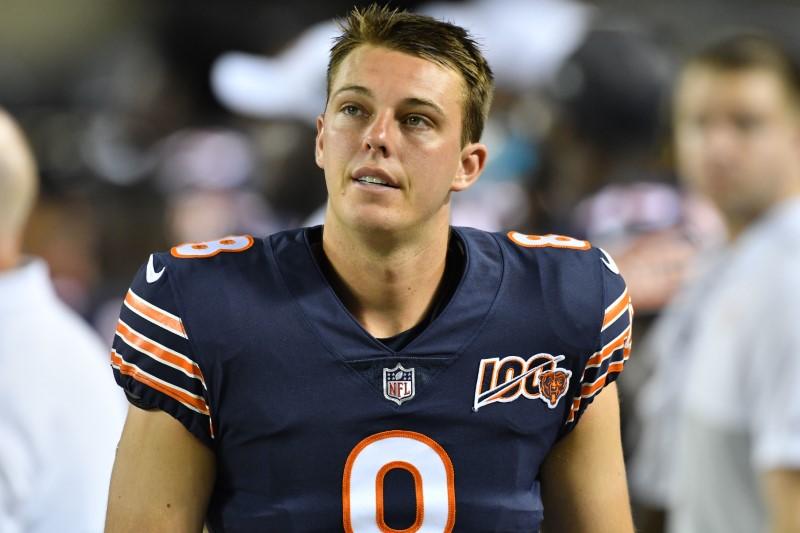 The Chicago Bears, still in the hunt for a kicker, waived Elliott Fry on Sunday.

Still, no one should assume that Eddy Pineiro, the remaining kicker in camp, has won the job.

“Is the competition over? Between those two, yeah,” head coach Matt Nagy told reporters on Sunday.

The team is searching for a replacement for Cody Parkey, who was cut after he missed a 43-yard attempt that would have given Chicago a win over the Philadelphia Eagles in the wild-card round of the playoffs in January. Instead, the Bears lost 16-15 after Parkey missed the kick with seconds remaining.

In June, the Bears waived former Pitt kicker Chris Blewitt, one of three kickers who took part at mandatory minicamp.

Pineiro, 23, kicked collegiately at Florida and signed in May 2018 with the Oakland Raiders as an undrafted free agent. He was placed on injured reserve in September and missed the season. The Bears acquired him in May for a conditional seventh-round pick in the 2021 NFL Draft.

This preseason, he has hit three of four attempts with a long of 41 yards.

The 24-year-old Fry, who played in college at South Carolina, signed with the Bears in April after the Alliance of American Football league folded. He kicked with the Orlando Apollos.

With the Bears, he made one of two attempts, missing from 47 yards on Friday in a loss to the New York Giants.

“Like any position we’re always going to be looking for the best,” Nagy said. “I think for Eddy, though, he needs to understand that we feel really good with where he’s at and now he’s never kicked in an NFL game before so that can go a couple different ways. It can go really good. It can go really bad. We don’t know that answer but for right now we’re good with where he’s at. We want him to just keep kicking like he’s been but we’re always going to keep that thing open and not just at that position but every position until we make that final 53.”