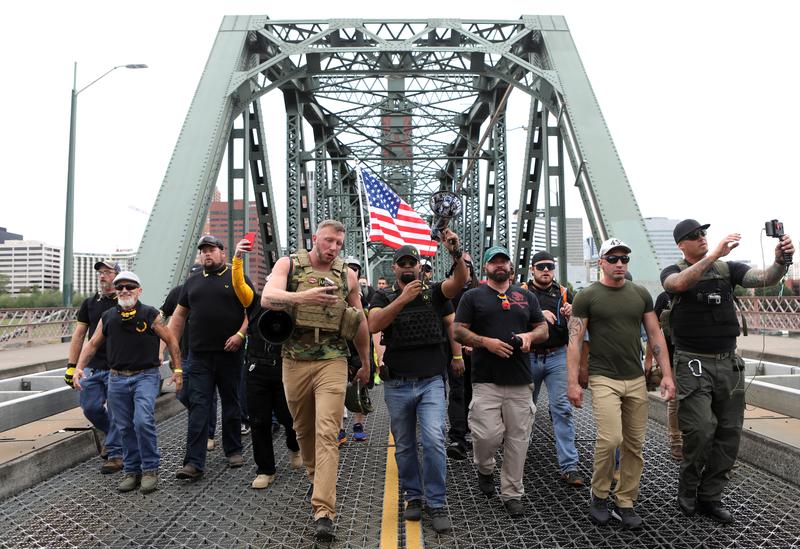 Members of the Proud Boys and their supporters march during a rally in Portland, Oregon, U.S., August 17, 2019. REUTERS/Jim Urquhart

(Reuters) – Police in Portland, Oregon arrested at least 13 people on Saturday as a right-wing group marched to a downtown waterfront park and anti-fascist counterprotesters scuffled with officers who tried to keep the two sides apart.

A rally by hundreds of supporters of the right-wing Proud Boys organization was met by a similar number of “antifa” opponents, and isolated clashes broke out between both sides and between antifa and police as the gathering wrapped up.

At least four people were being evaluated by paramedics for minor injuries, according to police. Officers said they seized weapons from multiple groups including bear spray, shields, and metal and wooden poles.

Right-wing and anti-fascist factions have clashed in Portland several times in recent months, including a rally that turned violent in July last year.

Hours ahead of Saturday’s competing demonstrations, U.S. President Donald Trump said “major consideration” was being given to designating antifa as a terrorist organization.

“Portland is being watched very closely. Hopefully the Mayor will be able to properly do his job!” Trump wrote on Twitter.

Ted Wheeler, Portland’s mayor, said he was not concerning himself with tweets from Washington.

“And frankly, it’s not helpful,” Wheeler told CNN. “This is a potentially dangerous and volatile situation.”