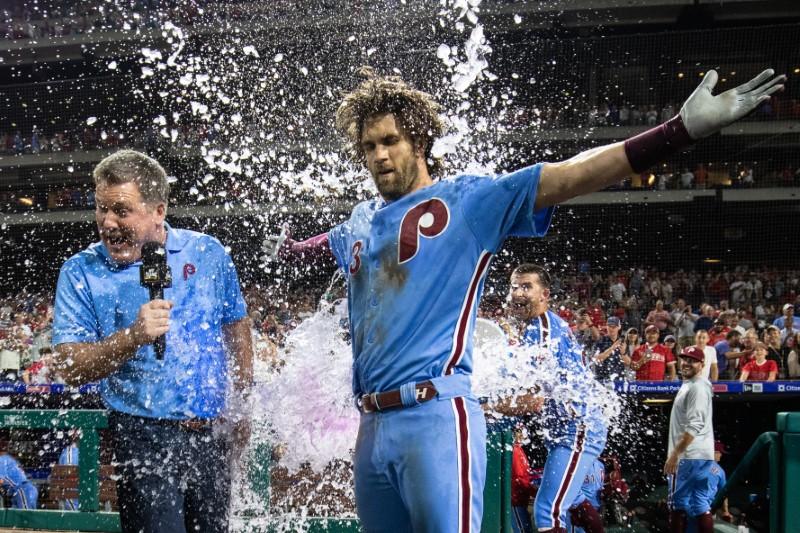 Bryce Harper hit a walk-off grand slam into the second deck in right field off Derek Holland in the bottom of the ninth inning to rally the host Philadelphia Phillies past the Chicago Cubs 7-5 on Thursday.

The Phillies entered the ninth trailing 5-1 before exploding for six runs to secure the three-game series sweep. Brad Miller hit an RBI single with one out in the ninth to close within 5-2. Roman Quinn followed with an RBI single, and Rhys Hoskins was hit by a pitch before Harper’s bomb.

Anthony Rizzo homered, singled and knocked in two runs for the Cubs. Kyle Schwarber snapped an 0-for-10 skid with a solo homer, his 100th career home run.

Alonso connected for a 451-foot, three-run homer in the first inning against Atlanta starter Julio Teheran (7-8) to match the record set in 2017 by Cody Bellinger of the Los Angeles Dodgers. He also went 5-for-5, his first career five-hit game, and drove in a career-high six runs.

The Braves rallied to score four runs via three home runs in the ninth inning and forced the Mets to insert closer Edwin Diaz. He walked Brian McCann but fanned Ender Inciarte to end the game and earn his 25th save.

Jose Ramirez hit a grand slam in the first inning and a two-run homer in the second, and visiting Cleveland belted a season-high seven home runs while rolling over New York.

Carlos Santana hit two homers and a double and scored four times for the Indians, who improved to 44-19 since June 4. Every Indians starter had a multi-hit game, and every starter except Franmil Reyes scored a run.

Sonny Gray allowed one hit and struck out 10 to highlight his third straight scoreless start as host Cincinnati recorded a victory over St. Louis.

Eugenio Suarez had an RBI single, and Jose Iglesias joined him with two hits for the Reds, who snapped a four-game losing streak. The Cardinals’ five-game winning streak ended.

Gray (8-6) yielded a two-out single in the fifth to Dexter Fowler before concluding his night after completing the inning. The 29-year-old extended his scoreless innings streak to a career-best 18 and became the first Reds pitcher to post three consecutive scoreless starts in the same season since Tom Browning in 1989.

Brian Anderson, Starlin Castro, Lewis Brinson and Jorge Alfaro each had three RBIs for the Marlins. Miami broke the game open with a six-run fifth inning as Anderson and Brinson each hit two-run doubles.

Los Angeles hit four homers, including a three-run shot by Cody Bellinger in the seventh inning — his career-high 40th dinger of the season. Bellinger became the first major-leaguer to 40 homers this year, though the Angels’ Mike Trout joined him later Thursday night.

Luis Arraez, Miguel Sano and Eddie Rosario homered, and Marwin Gonzalez went 4-for-5 with a double and two RBIs as Minnesota jumped out to an 11-run lead and cruised to victory over Texas in Arlington, Texas.

Arraez also doubled and had three hits, scored twice and drove in three runs. Jorge Polanco and Jake Cave each had two hits and scored twice for the Twins, who remained a half-game ahead of the Indians in first place in the American League Central.

It was the 36th game this season in which Minnesota, which leads the majors with 236 home runs, has hit at least three homers in a game.

Kyle Seager capped off a big series with two hits and three RBIs as Seattle cruised past host Detroit.

Seager had six hits, including three homers, and drove in nine runs during the three-game series. The Mariners won two of three.

Mallex Smith had three hits, a run, an RBI and two stolen bases, while Austin Nola supplied three hits and an RBI for Seattle. Omar Narvaez reached base four times while scoring and knocking in a run, and Dylan Moore added a solo homer.