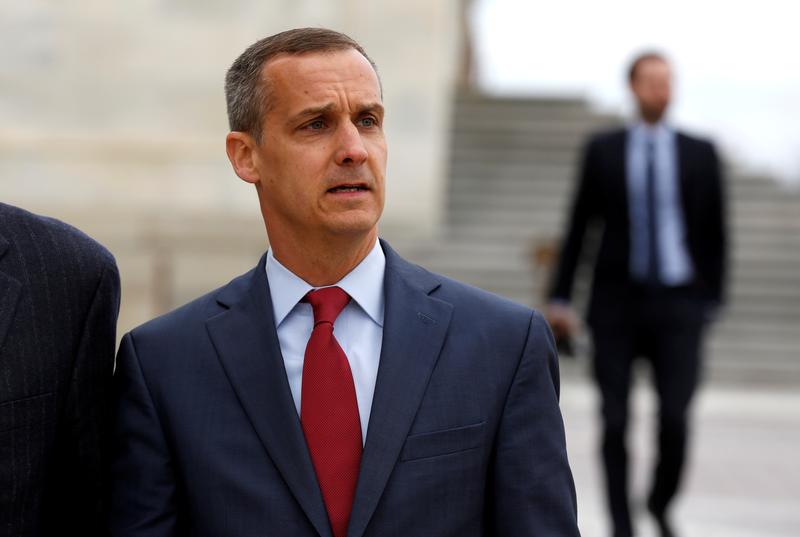 WASHINGTON (Reuters) – President Donald Trump waded into an internal Republican fight in New Hampshire ahead of his trip there on Thursday, advocating that his former presidential campaign manager Corey Lewandowski run for the Republican nomination for U.S. Senate to challenge Democratic incumbent Jeanne Shaheen.

Trump said in a radio interview that aired Thursday in New Hampshire that state resident Lewandowski “would be fantastic” as a senator.

“He’s got great energy. He’s terrific on television,” Trump said. “He’s a really good guy. I like him a lot. I like his family. I like everything about him.”

Some Republicans in the state have already been vocal about not wanting to see a run by Lewandowski, who built a reputation as a ruthless campaigner before he launched Trump’s presidential bid in 2015.

If he runs, it would set up a potentially bruising primary contest. Bill O’Brien, a former state House speaker, is running, and other well-known Republicans could still enter the race.

Democrats were prepared to begin attacking Lewandowski immediately, a source familiar with Democratic plans said. The party would focus squarely on Lewandowski’s lobbying work, including for companies like T-Mobile (TMUS.O) and for a Serbian political party with ties to Russia, the source said, asking not be named to speak about party strategy.

“Corey Lewandowski is a shadow lobbyist with a nefarious client list that includes foreign interests, which is why New Hampshire Republicans and even Governor Chris Sununu have been keeping their distance,” said Josh Marcus-Blank, a spokesman for the New Hampshire Democratic Party.

Lewandowski, in response to the Democratic criticism, told Reuters he is not a lobbyist. He declined to confirm if he will run for the U.S. Senate seat.

He has repeatedly denied that his work constitutes lobbying, but T-Mobile acknowledged in 2018 that he served as a consultant on their lobbying effort to get antitrust approval for their acquisition of Sprint.

T-Mobile is expected to gain approval in the next month from the Federal Communications Commission, which is run by a Trump appointee.

Democrats in Washington also appeared ready to join the fight. On Thursday, the Democratic-led House Judiciary Committee issued a subpoena for Lewandowski, demanding he testify before the committee about his time running Trump’s campaign.

Lewandowski was one of Trump’s first aides in his 2016 bid for president. But under pressure from his children and party officials who saw the campaign manager as too inexperienced, Trump fired Lewandowski and replaced him with Paul Manafort.

Manafort was then fired after reports of his ties with Russia and lobbying work done on their behalf, which ultimately landed him in federal prison.

Lewandowski has remained close to Trump and speaks to him regularly. There was frequent speculation in the president’s first year in office that Lewandowski could join the administration.

Lewandowski has never registered as a lobbyist. It is common for high-level lobbyists in Washington to skirt registration requirements and instead act as consultants to corporations.

After leaving Avenue, Lewandowski was linked with the firm Turnberry Strategies, which was named after a Trump golf course and used the same address as the building where Lewandowski lived. T-Mobile said they hired Turnberry, including Lewandowski, to consult on their merger with Sprint. Even after that disclosure, Lewandowski continued to deny ever working for Turnberry.

Turnberry then established another firm called Twin Rocks Global LLC at the same address as Lewandowski. The firm filed to represent the Alliance of Independent Social Democrats (AISD), a Serbian political party that has worked with Russia’s ruling party.

Lewandowski has also denied lobbying on behalf of the AISD.