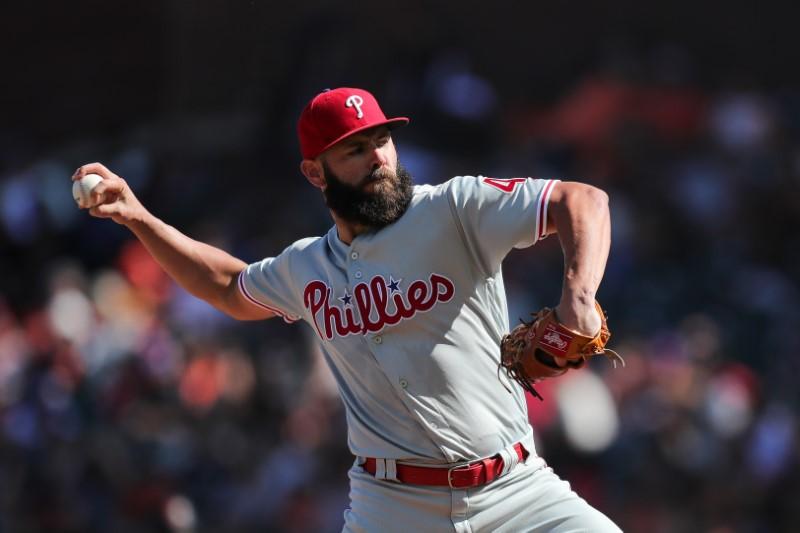 The 33-year-old Arrieta has been bothered by a bone spur in his pitching elbow. Arrieta said he is considering undergoing an arthroscopic procedure. If he does, he said he probably wouldn’t pitch again in 2019.

The Phillies recalled first baseman Logan Morrison from Triple-A Lehigh Valley in a corresponding move. Morrison has a .239 average and 137 homers in 959 career major league games with four teams.

—Pittsburgh Pirates right-hander Jameson Taillon will miss all of next season after undergoing flexor tendon and Tommy John surgeries in his pitching arm earlier this week.

The 27-year-old underwent a scheduled surgery to repair the flexor tendon on Tuesday in New York. During the operation, it was determined Taillon also needed surgery on the ulnar collateral ligament in his right elbow.

The Pirates said that Taillon is projected to return for the 2021 season. It is the second time Taillon (29-24 record, 3.67 ERA in four seasons) has undergone Tommy John surgery. He also underwent the procedure in 2014.

—Houston Astros right-hander Gerrit Cole felt encouraged by test results on his right hamstring after he was scratched from a start Tuesday against the Chicago White Sox.

Cole (14-5, 2.87 ERA) was scheduled to get the start in the second game of a Tuesday doubleheader but had some discomfort in his right leg while warming up.

Cole, who is expected to join the team during a four-game series at the Oakland Athletics that begins Thursday, is 8-0 with a 1.77 ERA, 17 walks and 86 strikeouts in his last 10 starts. His last loss was on May 22 against the Chicago White Sox.

—Washington Nationals right-hander Max Scherzer, who has been on the 10-day injured list since July 29, is ready to return to the big-league mound again as soon as his team is willing to let him.

When Scherzer (9-5, 2.41 ERA) does pitch, which could be as early as Saturday or Sunday against the Milwaukee Brewers, the Nationals will limit his workload to possibly four or five innings, or about 60 to 70 pitches.

McNeil had an MRI exam in Atlanta on Wednesday after feeling “a little snag” in his left hamstring in Tuesday’s loss to the Braves. He suffered the injury running to first, trying to beat out a groundball in the ninth inning. After slamming his helmet to the ground, he was helped off the field by a trainer.

McNeil, 27, is batting .332 (third in the National League) with 31 doubles, 15 homers and 55 RBIs in 105 games this season. Infielder Ruben Tejada was promoted from Triple-A Norfolk to take McNeil’s place on the 25-man roster.

The move is the next step in the rehabilitation process for Carrasco, who has been sidelined since late May with a blood condition that was later revealed to be chronic myeloid leukemia. The 32-year-old completed two batting practice sessions on consecutive days this week without issue.

There is no timetable for the return of Carrasco, who last pitched on May 30. Carrasco has a 4-6 mark with a 4.98 ERA in 12 starts this season after signing a four-year, $47 million contract extension in December.

The move is retroactive to Sunday, which was the two-time All-Star’s 33rd birthday. Splitting time between first base and third base, Sandoval is batting .269 with 14 homers and 41 RBIs in 107 games this season.

In a corresponding transaction, the Giants reinstated outfielder Alex Dickerson from the 10-day IL. He has been out since July 30 due to a strained right oblique. Dickerson, 29, batted .386 with six homers and 23 RBIs in 30 games with San Francisco after being acquired in a June 10 trade with the San Diego Padres.

Garcia, 28, sustained the injury during Tuesday night’s 7-5 victory at San Diego. Garcia has helped the Rays surge into the American League’s second wild-card spot by winning five straight games and 12 of their last 14.

He is batting .278 with 17 homers, 57 RBIs and nine stolen bases in 101 games this season. In a corresponding move, Tampa Bay called up right-hander Jose De Leon from Triple-A Durham.

Puig shared the news on Twitter: “Thank you God for this great opportunity to be an American citizen.”

Puig, 28, starred on the Cuban national team before being transported out of the country in 2010. He initially ventured to Mexico and negotiated a seven-year, $42 million contract with the Los Angeles Dodgers in June 2012. He is batting .263 with 23 homers and 67 RBIs in 111 games this season with the Cincinnati Reds and Indians.

Dull, 29, appeared in seven games with the Oakland Athletics this season and posted a 12.00 ERA. He was claimed off waivers by the Giants on Aug. 5.