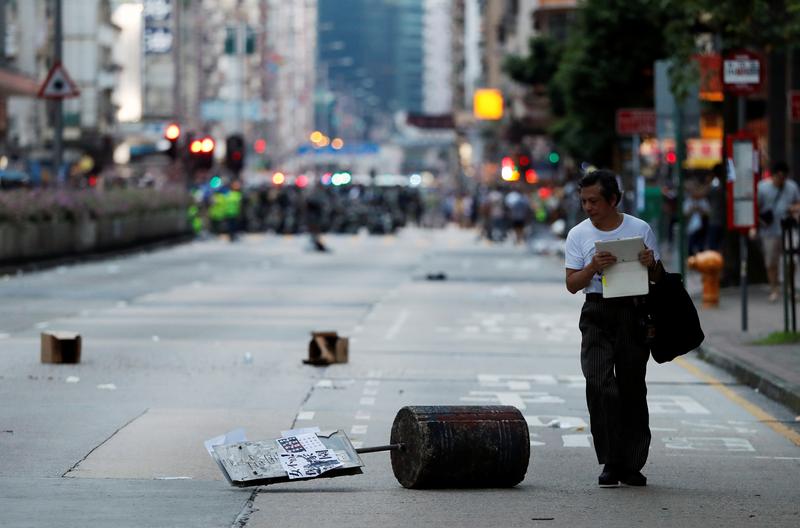 A man walks on a street after the clashes between anti-extradition bill protesters and police officers during a demonstration in Sham Shui Po neighbourhood in Hong Kong, China, August 11, 2019. REUTERS/Issei Kato

Financial Secretary Paul Chan unveiled the plan at a news conference, after saying the government is expecting to lower its 2019 GDP growth forecast to 0%-1%, from the original 2-3%.

Chan said the measures include subsidies for the underprivileged and business enterprises, as well as somewhat higher salary tax rebates, but said the measures were not related to political pressure from the protests.

“It is prudent and reasonable to assume that the economic headwinds will continue to be very strong,” he said.

The Hong Kong government will release its latest economic forecasts along with second-quarter data on Friday, though analysts note the April-June readings won’t give a full picture of the sharp shock to businesses seen in the last two months.

Ten weeks of increasingly violent confrontations between police and anti-government demonstrators have plunged the international business hub into its worst crisis since it reverted from British to Chinese rule in 1997.

Tourists are cancelling hotel bookings and retailers are forecasting a sharp drop in sales, adding to the pressure on local businesses from the year-long Sino-U.S. trade war and China’s broader economic slowdown.

Hong Kong leader Carrie Lam last week warned the next downturn will hit the city’s economy like a “tsunami”, and said her administration will be “more daring” in supporting growth.

“The world’s going into recession… Hong Kong will not be able to somehow ride that out without being affected,” he said, China’s economy was also struggling.

Preliminary data showed Hong Kong’s economy expanded 0.6% in April-June from a year earlier, in line with the first quarter’s decade-low pace and much less than economists expected.

But GDP contracted 0.3% on a quarter-on-quarter basis.

Research firm Capital Economics warned the months-long protests could push Hong Kong into a recession, and feared “an even worse outcome if a further escalation triggers capital flight”.

Hong Kong’s property market, one of the world’s most expensive, would be hit hard in that scenario, Capital Economics said in a note to clients.

Chinese paramilitary forces conducted exercises across the border from Hong Kong on Thursday, raising fears that Beijing may be preparing to act against mass demonstrations in the Asian financial hub it has described as “near terrorism”.