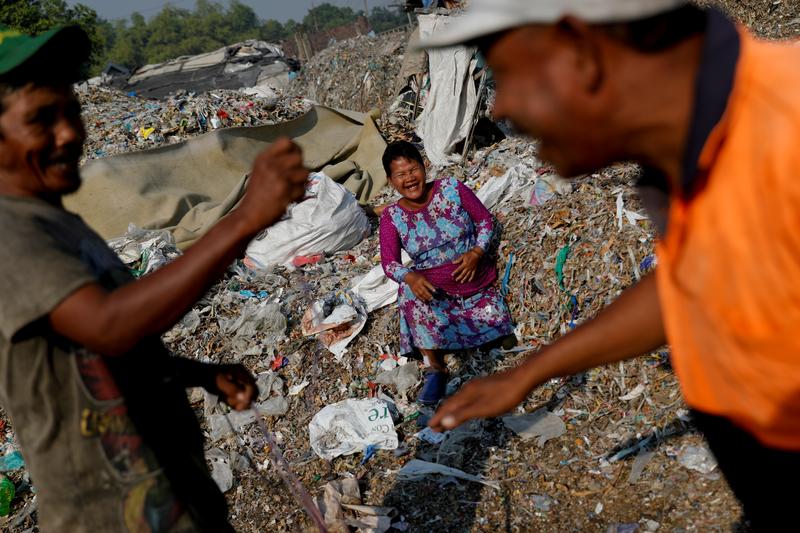 Sunarni laughs as her husband Salam jokes with his friend near a pile of rubbish at Bangun village in Mojokerto, East Java province, Indonesia, August 1, 2019. REUTERS/Willy Kurniawan

Overwhelmed by a spike in waste imports after China closed its doors to foreign garbage, Indonesia has tightened import rules and customs inspections, sending hundreds of tonnes of foreign waste back to their origin countries.

Green groups praised the crackdown, but Bangun residents say restricting trash from countries like the United States, Canada and Australia will wipe out a key source of income.

“If they’re going to forbid us from this, there must be a solution. The government hasn’t provided us jobs,” said Heri Masud as he took a break from sifting through rubbish piled high around the village of 3,600 people.

The front and backyards of homes in Bangun overflow with waste on land that once had been used to grow rice.

Villagers look for plastic and aluminum to sell to recycling firms. Tofu makers also buy waste to burn as fuel when making the soy-based food.

Masud said the money from sorting trash is used to fund activities such as sending villagers on the Haj pilgrimage to Islam’s holiest sites in Saudi Arabia.

“Every year 17-20 people from this village go on a Haj. That’s funded from this waste,” he said.

Salam, 54, said recycled rubbish paid for his children’s schooling, and also bought a house for his family and livestock.

“I have nine goats now,” said Salam, who works as a waste broker between villagers and a nearby paper factory and says his job is easier than farming.

While it may be more lucrative, the piles of garbage are a threat to villagers’ health, environmentalists say.

Research by the green group ECOTON found microplastics had polluted groundwater in Bangun and in the nearby Brantas river used for drinking water by 5 million people in the area.

Indonesia imported 283,000 tonnes of plastic waste last year, up 141% from a year earlier. The country is the second biggest contributor of plastic pollutants in the world’s oceans, according to a 2015 study.

Domestic waste is also a problem.

Indonesia generates 105,000 tonnes of solid municipal waste everyday in urban areas, with only 15% recycled, said a World Bank report in June. Many city landfills are near capacity and beaches around the archipelago are often strewn with rubbish.

“We already know that Indonesia is dirty, and now America is adding their rubbish,” Prigi Arisandi, executive director of ECOTON, said at a recent rally outside the U.S. consulate general in Surabaya in East Java.

Indonesia has launched a plan to reduce marine plastic debris by 70% by 2025, pledging to spend $1 billion, but it is unclear how much progress has been made.

The government is behind schedule for setting up waste-to-energy plants, while a plan to impose a levy on plastic bags is facing strong opposition from the plastic industry.