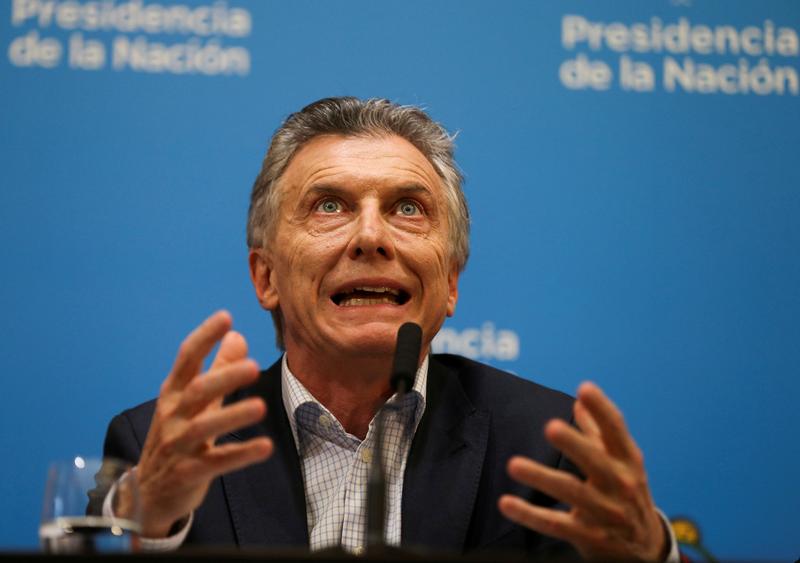 BUENOS AIRES (Reuters) – Argentine President Mauricio Macri, smarting from a bruising primary election loss, announced on Thursday an end to sales taxes on basic food products until the end of the year in a bid to salvage his re-election prospects and end an economic crisis.

In a televised address to the nation, Macri announced that sales taxes of around 21 percent would be axed on basic foodstuffs – including bread, sugar, milk, oil, flour, pasta, eggs and rice – to soften the impact of an IMF-backed austerity program on the growing ranks of the poor.

The tax cut represents the boldest of a series of measures Macri has unveiled since his overwhelming defeat on Sunday by the leftist opposition, as he seeks to bolster his waning support and revive Latin America’s third-largest economy.

The shelving of the sales taxes was an awkward about-turn for a president who took office in 2015 vowing to slash public subsidies and to correct what he called years of leftist economic mismanagement.

“I hope this will be a relief for the pockets of millions of Argentines,” Macri said. “I will continue working to bring peace of mind so that this electoral process does not affect the daily life of all Argentines.”

In a news conference after Macri spoke, Labor and Production Minster Dante Sica said the measures would cost about 10 billion pesos ($174.2 million), coming into effect on Friday.

Macri has already announced a series of welfare subsidies and tax cuts for lower-income workers since the weekend. He has also promised to raise the minimum wage, temporarily freeze gasoline prices and increase the income tax bracket floor by 20%. On Thursday, he announced plans to help people with inflation-linked mortgages.

On Sunday, center-left presidential candidate Alberto Fernandez trounced Macri by a margin of 15 percentage points, suggesting he could win October’s presidential ballot in the first round.

The result spooked markets on fears of a return to protectionist policies and the end of free-market economic reforms should Fernandez triumph in October. His vice presidential candidate is former leftist President Cristina Fernandez de Kirchner.

Argentina is no stranger to financial crises and memories of a painful 2002 debt default – that plunged much of the population into poverty – still linger.

But its latest lurch, in which the peso lost about a quarter of its value in three days, comes amid widespread volatility and fears of a global recession sparked by the U.S.-China trade war, and ongoing protests in Hong Kong.

Argentine markets bucked the dismal three-day losing streak on Thursday, amid signs of political compromise and a new central bank measure to prop up the embattled currency.

The peso ended the day around 5% higher at 57.4 pesos per dollar, according to traders, who said the chance to snap up rock-bottom pesos had also contributed to the jump. Argentina’s Merval stock index closed up more than 4%.

Graphic: Graphic on the peso and country risk index – here

There had been few signs of rapprochement between Macri and Fernandez in the immediate aftermath of the vote, but as markets continued to tumble on Wednesday, they spoke on the phone, agreeing to try to calm volatility. Fernandez later said his economic plans did not contemplate a debt default.

The central bank also announced on Thursday that from Aug. 20 private banks would be barred from having total dollar holdings exceeding 5 percent – essentially prompting them to sell U.S. currency if their inventory of greenbacks exceeds that level.

The plan would unleash liquidity into the market without the central bank having to tap its reserves in dollar auctions, a source with knowledge of the plan said. The source added it was likely banks had already started selling dollars to comply.

“The measure adopted by the central bank seems to have had an effect… and managed to slowly cut the successive rises in the value of the dollar,” said Gustavo Quintana of brokerage PR Corredores de Cambio.

Thursday was the first day this week that the central bank did not undertake dollar auctions from its own reserves to prop up the peso. Since Sunday’s vote, the central bank has auctioned a total of $503 million.