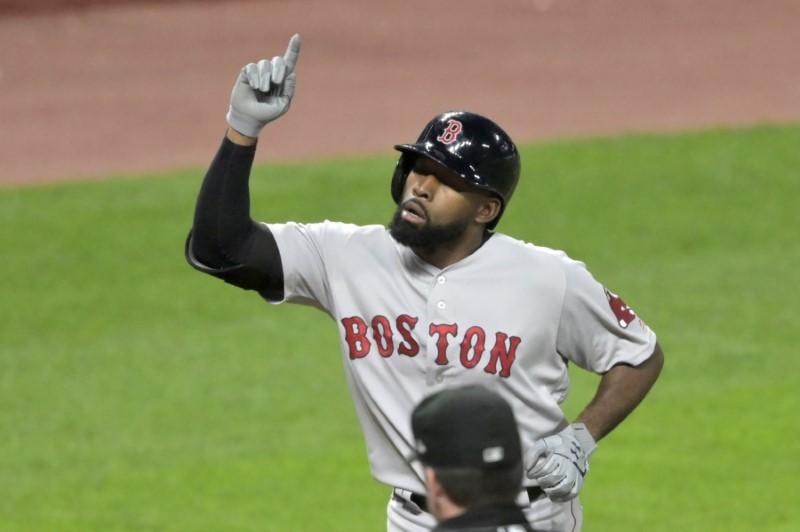 Jackie Bradley Jr. hit a tiebreaking home run in the top of the 10th inning as the visiting Boston Red Sox overcame blowing a five-run lead to beat the Cleveland Indians 7-6 Tuesday night.

After the Indians tied the score on Francisco Lindor’s RBI double in the bottom of the ninth, Bradley’s one-out homer off Nick Wittgren (4-1) in the 10th restored the Red Sox’s lead.

Sale gave up five runs (three earned) on five hits and two walks in 6 2/3 innings, recording 12 strikeouts. Rafael Devers had four doubles among a career-high six hits, and he also drove in three runs to lead the Boston offense. Carlos Santana and Franmil Reyes homered for the Indians.

Marwin Gonzalez hit a three-run, go-ahead home run off Josh Hader in the eighth inning, and Mitch Garver also homered as visiting Minnesota moved back into first place in the American League Central by rallying to defeat Milwaukee.

With Minnesota trailing 5-4 with two outs and runners at first and second, Gonzalez clubbed Hader’s first pitch 402 feet over the fence in left-center. It was the fourth home run allowed by Hader over five innings in his last six appearances and also his third blown save during that span.

The Twins, who passed the Indians to regain first place in the division, won for the second time in seven games. Yasmani Grandal hit a three-run homer for the Brewers.

Seager drove in six runs, tying his career high. The second set of back-to-back homers came during a six-run sixth inning that put the Mariners on top. Seattle ended a three-game skid while handing the Tigers their third consecutive loss.

Zac Grotz (1-0), the second of the Mariners’ seven pitchers on the night, recorded his first major league victory in his third big league game. He gave up one run on two hits in 1 2/3 innings while striking out three.

DJ LeMahieu homered on the first pitch, and New York extended its winning streak over visiting Baltimore to 15 games.

The Yankees have their longest single-season winning streak against one opponent since also posting 15 straight wins against the 103-loss Philadelphia Athletics in 1954.

Domingo German (16-2) allowed two runs and five hits in seven innings to become the first 16-game winner in the majors this year. He struck out seven, walked one and won his career-high seventh straight decision.

Jarrod Dyson homered on the second pitch of the game, one of three first-inning long balls for Arizona, and the Diamondbacks beat Colorado in Denver.

Christian Walker and Nick Ahmed also homered in the first, and David Peralta went deep in the second inning as the Diamondbacks jumped on Jeff Hoffman, Colorado’s emergency starter. Hoffman was called up from the minors to replace Jon Gray (ankle).

Buster Posey began a string of three straight two-out doubles in the sixth inning, and Madison Bumgarner extended his streak of unbeaten starts to 10 as host San Francisco edged Oakland.

Scooter Gennett produced an insurance run with a sacrifice fly, and Will Smith survived a shaky ninth inning, helping the Giants reach .500 at 60-60 with a fourth win in the past five games.

Bumgarner (8-7) completed seven innings, allowing just one run on two hits. He struck out nine and did not walk a batter. Oakland’s Stephen Piscotty hit a solo homer in the fifth inning.

Jack Flaherty continued his recent hot streak with seven shutout innings, and St. Louis won at Kansas City. Flaherty has the longest current scoreless-innings streak in the majors at 23 innings.

Flaherty (6-6) allowed just three hits while striking out seven with one walk. Carlos Martinez got the final two outs for his 13th save in 16 chances.

A.J. Pollock had the first three-double game of his career, and rookie Will Smith homered twice for the first time, helping visiting Los Angeles rout Miami.

Cody Bellinger hit his 39th homer of the season, tying him for the major league lead. The Dodgers also got long balls from Corey Seager, Justin Turner and Matt Beaty.

Dustin May (1-1) earned his first major league win. He lasted 5 2/3 innings, allowing three hits, one walk and one run while striking out five.

Acuna went 2-for-5 and scored his National League-leading 100th run. He also threw out Todd Frazier at the plate to end the sixth inning.

Fried (14-4) pitched six innings and allowed one run on six hits and three walks with four strikeouts. Mark Melancon worked a perfect ninth, striking out two, to earn his second save of the year, his first since joining the Braves.

Zack Greinke won his second consecutive start since his trade to Houston, allowing two runs over six innings to beat host Chicago in the first game of a doubleheader.

Ivan Nova scattered four hits and retired 17 of the final 18 hitters he faced in a complete game to help host Chicago salvage a doubleheader split with Houston.

Nova (8-9) struck out three and walked none in his second complete game of the season. The only run he surrendered was unearned. Ryan Goins delivered a two-run single in Chicago’s three-run second inning, and Adam Engel and Ryan Cordell also had run-scoring hits.

George Springer singled twice for Houston and had an RBI single in the third inning for the lone blemish against Nova, who threw 104 pitches.

Ken Giles, pitching for the first time since Aug. 7 because of elbow inflammation, allowed only a walk in the ninth to earn his 16th save.

Joe Ross allowed one run in a season-high 6 2/3 innings, and Juan Soto homered in his return from an ankle injury as host Washington posted a victory over Cincinnati.

Brian Dozier belted a solo homer for the Nationals, who have won six of their past eight games. Daniel Hudson worked around three hits to record the final four outs and secure his third save of the season, and his first with Washington.

Jose Iglesias had an RBI single in the seventh inning for the Reds, who have lost three in a row after winning five of their previous six.

Jean Segura and Roman Quinn added two hits each for the Phillies. Philadelphia’s Jason Vargas gave up five hits and two runs in six innings. Blake Parker (2-2) earned the win in relief, and Hector Neris picked up his 21st save.

Nicholas Castellanos homered among his two hits for the Cubs.