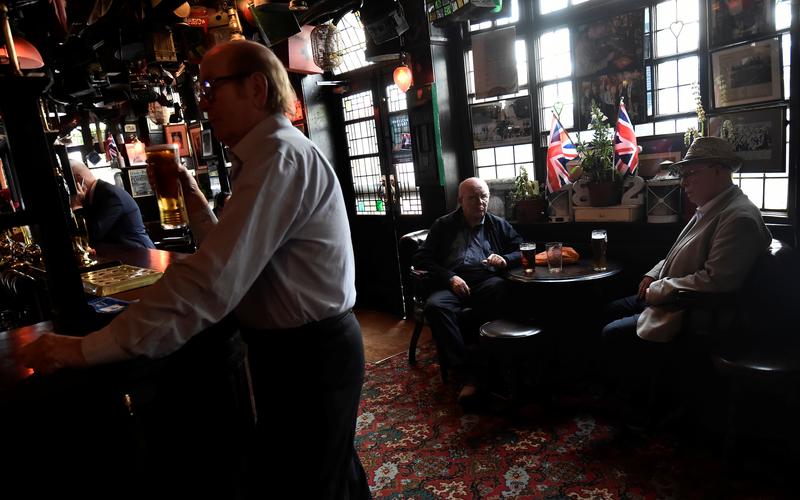 LONDON (Reuters) – The boss of one of Britain’s leading brewery groups, Marston’s (MARS.L), has urged Prime Minister Boris Johnson to help save pubs that are at the heart of many local communities by cutting beer duty.

FILE PHOTO: People sit in the bar of The Churchill Arms pub in Kensington in London, Britain, May 30, 2017. REUTERS/Hannah McKay

Just a few days after leading retailers said the government needed to freeze business rates to prevent shops from shutting down, Marston’s Chief Executive Ralph Findlay said Johnson was looking for populist measures, and a move to protect pubs would be hugely popular.

He said successive governments had increased beer duty by a penny or two a pint in many budgets, resulting in about 54 pence now going into Treasury coffers in beer duty alone for each pint sold.

“The average pub is paying 140,000 pounds a year to the government and a big chunk of that is beer duty,” he told Reuters.

The number of pubs in Britain has fallen from about 165,000 to 145,000 in a decade, Findlay said, and around three pubs a day were still closing their doors for good.

“There are a wide range of cost pressures, but for pubs and particularly the community pubs that matter locally, about 70% of all the sales across the bar are beer,” he said. “It’s the one of the biggest costs the pub has to bear and it’s one of the easiest thing for the government to manage.”

Former finance minister Philip Hammond froze the duty on beer and cider in his October 2018 Budget to keep the “cost of beer down for patrons of the Great British Pub”.

Findlay, however, said the industry needed a cut rather than a freeze, and Johnson now had an opportunity to support an industry which employed close to 1 million people, nearly half of whom were aged under 25.

“(Johnson’s) looking for populist measures; this is something that is I think hugely popular,” he said.

“There’s plenty of evidence that if he doesn’t do something about duty, the amount of money the government collects from pubs will decline.”

Marston’s has around 1,500 pubs in its estate, including about 1,145 community-focused taverns.

Findlay said he was backing the “Long Live the Local” campaign, which has collected nearly 130,000 signatures in a petition to cut beer tax.