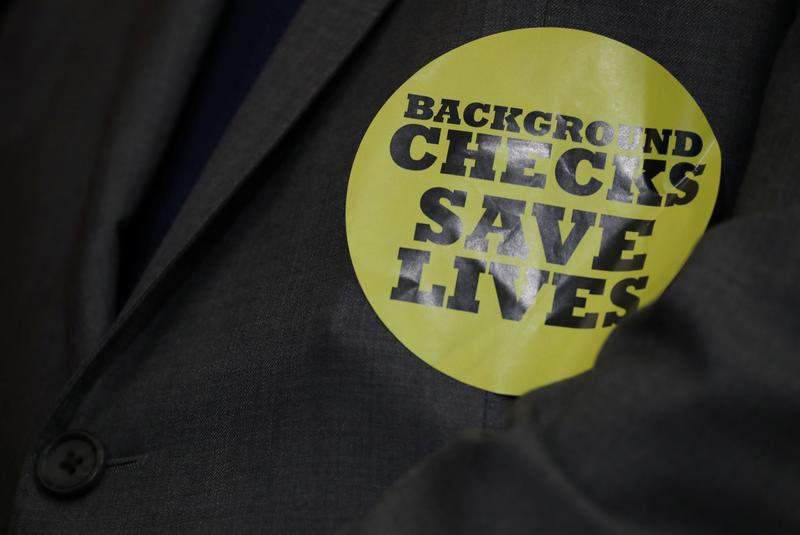 WASHINGTON (Reuters) – U.S. Democrats sought to gain the upper hand in the gun debate with President Donald Trump and Senate Republicans on Tuesday, demanding quick action on background checks and suggesting that money for Trump’s border wall be used to fight domestic terrorism.

FILE PHOTO: A member of the U.S. Congress wears a “Background Checks Save Lives” sticker during a news conference announcing the introduction of “bipartisan legislation to expand background checks for sales and transfers of firearms” on Capitol Hill in Washington, U.S., January 8, 2019. REUTERS/Jonathan Ernst/File Photo

Democrats in the House of Representatives held a news conference with relatives and friends of mass shooting victims to pressure Senate Majority Leader Mitch McConnell to call the upper chamber back from an August recess for a vote on gun control legislation that has already been approved by the House.

In a related move, Senate Democratic leader Chuck Schumer was preparing to ask the Trump administration in coming days to withdraw its request for $5 billion for a border wall with Mexico and direct the funds to initiatives to combat white supremacy and gun violence, according to a person familiar with his thinking.

With opinion polls showing a majority of Americans in favor of gun restrictions but Trump and his fellow Republicans unlikely to give in on tough measures, Democrats in Congress and those vying for their party’s presidential nomination are making it a key plank in their 2020 election contests.

Congress has failed to pass meaningful gun control measures despite multiple mass shootings over the years, mostly due to lobbying by the National Rifle Association and other pro-gun groups. Those groups have tapped into a deep-seated suspicion of government efforts to interfere with gun ownership, which is protected by the Second Amendment of the U.S. Constitution.

Democrats are currently pressing for Senate action on legislation that would expand background checks on gun buyers by closing a loophole that allows as many as one-fifth of gun sales over the internet and at gun shows to go unchecked. The measure passed the Democratic-led House in February, getting eight Republican votes.

“Is it the solution to all this violence? It is not … it is a significant and important step to take in the face of this violence,” House Majority Leader Steny Hoyer told reporters.

“Not to act is a refusal to meet our responsibilities to the American people,” he added.

Hoyer said the House Judiciary Committee, which has jurisdiction over gun control, will return to Washington early to consider new legislation that would help states keep guns away from people deemed a threat to themselves or others, ban assault rifles and ban high-capacity magazines. A committee aide said a final decision to return has not been made, however.

McConnell told a radio interviewer last week that calling the Senate back into session early would only lead to political posturing. Instead, he has instructed the chairs of three Senate committees to work on legislation that can be debated when lawmakers return from their six-week recess on Sept. 9.

Legislation sought by McConnell would need to garner enough bipartisan support to pass the Senate and be signed into law by Trump, who has threatened to veto the House legislation and sent mixed messages on what kinds of measures he could sign.

At times, the president has voiced support for toughening background checks for gun buyers. But he failed to mention the idea in an address last week that focused on mental illness, the internet, and video games as potential causes of shootings.

On Tuesday, Trump said he is convinced that McConnell wants to toughen background checks.

“He wants to do background checks. I do too, and I think a lot of Republicans do,” the president told reporters in New Jersey.

“I don’t know frankly that the Democrats will get us there. … We’ll see what happens,” Trump said.

The Senate could consider a weaker version of the House legislation which would exempt all gun transfers, including sales between close family members, from background checks. The House version exempts only loans and gifts between relatives.

The bill, sponsored by Republican Senator Pat Toomey and Democratic Senator Joe Manchin, failed in 2013 in the aftermath of the murder of 20 children and six staff members at an elementary school in Newtown, Connecticut, in December 2012.